Captain Century in the US of A


Like many people America has featured throughout my life in many ways. And like many people I have never actually been there. I’ve changed planes a couple of times (in New York and Detroit) but that doesn’t count as a visit. American films, books and music have been a rich and regular source of entertainment throughout my life. Growing up in Trinidad, in the West Indies, meant that American food and television were constant features of daily life. I remember visits to the drive-in cinema where we used to hook up a speaker to the door of our car and watch the latest movie on a very big screen at the other end of a large open-air car park. And talking of cars, in the 1960’s an uncle of mine owned a Chevrolet. I can’t remember what model it was, but it was massive with huge rear fins and front and rear bench seats that could seat three or four people across. I have happy memories of visits to the beach with my three cousins and my sister all sitting in a row in the back of the Chevy whilst the car wallowed around on some rather sketchy tarmac and dirt roads. Hot dogs, hamburgers and popcorn were a regular feature of our diets.

I’ve learned a bit about American history and would like to learn more about life before 1492 when Columbus discovered the country. Events post-1492 provided a lot of the focus for my history lessons at school. When I left Trinidad our lessons had reached the start of the 20th century having covered the War of Independence, the move westwards and the Civil War. Amusingly, by the time I came to live in the UK history lessons here had arrived at the Tudors so I missed out on early Greek and Roman history as well as all that stuff about cakes (Alfred), the sea (Canute) and the Crusades (Richard I).

The sheer size of America, with several time zones, adds another dimension. The huge range of lifestyles, cultures and outlooks might be a bit like the differences here between Cockneys, the Scots and the Welsh, but on a much broader and bigger scale. America’s place in the world means that it has always featured prominently in the news and other media. The arrival of the Trumpster seems to have given this a new impetus. As a one-time PR person I’ve learnt to take what I read and hear with a pinch of salt. Fake news – hmm?

This all fascinates me, and I have long wanted to find out more. I thought the best way would be to get on my bike and go for a ride, so I did some research online to see what the options were.

Leaving aside a fully self-supported tour (i.e. panniers, tent, camping and cooking etc.) there was a range of possibilities for an organised tour. Some companies provide tented accommodation – and some seemed to expect riders to erect and take down their own tents (no thank you after a long day in the saddle). Others laid on self-catering hostel type accommodation. One company even offered a very up-market, five-star approach and a near pro-racer experience (daily bike cleaning and maintenance included) with a price tag to match. Along the way I discovered Cross Roads Cycling Adventures, owned by Tracy Leiner.

Tracy rode her first USA tour in 1995 and has been helping other riders to share and enjoy the experience every year since. Looking at her PR blurb, with my usual pinch of salt, I quickly felt a strong resonance. What Tracy described seemed to be exactly what I was looking for in terms of the quality of the ride and the level of support provided. But what really clinched it was the way Tracy described her first ride and how people on the ride evolved in to a team. I felt a strong resonance with my own experiences on my 2015 Land’s End to John O’Groats adventure which I have written about in my book, Passione Celeste.

My last bit of research was to speak to two UK riders who had done the tour with Cross Roads. They shared a lot of helpful information with me. The clincher though was when I asked them if they would do the tour again with Cross Roads and both responded with a resounding ‘YES’! Realising that the time to stop thinking and dreaming had arrived. I was in.

On Sunday 13 May I’ll be dipping my wheels in the Pacific at Manhattan Beach, Los Angeles before riding 3,400 miles ride to dip my wheels in the Atlantic at Revere Beach, Boston. Over 48 days, including 4 rest days, I’ll be riding through 15 states. The route covers a bit of everything the USA has to offer, including coasts, deserts, mountains, prairies, wooded hills, small towns and larger cities. I’ve bought a USA road atlas and looking at this alongside Tracy’s route descriptions has got me very excited! 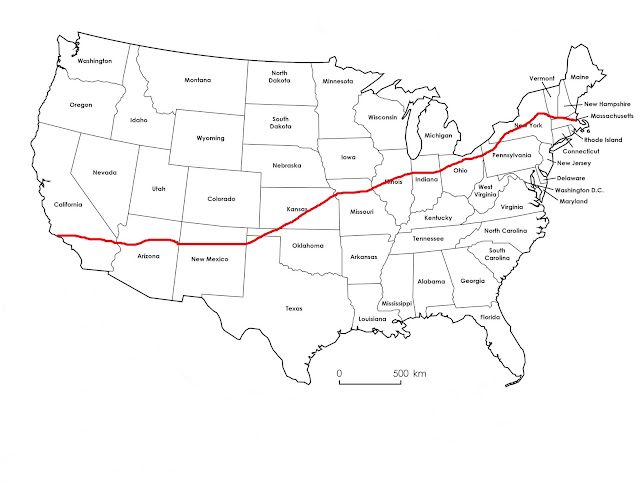 I’m expecting to have the ride of my life – literally. Apart from being excited i am also a little bit apprehensive! Most of the first four days will be spent riding across California to the Arizona State Line. I used to think of states as equivalents to English counties. How wrong I was. States are more like countries – Scotland and Wales. Only much bigger! It’s going to take three days (260 miles) to cross California which covers an area nearly twice the size of the UK.

As we head eastwards we’ll be following the historic Route 66 part of the way. Gradually we will turn north eastwards heading eventually almost to the Canadian border near Niagara. Then we will ride in a more easterly direction through upstate New York and New England before eventually arriving in Boston on Friday 29 June. With the wonders of modern technology (i.e. Giggle Maps) I’ve already been having a peak at some of the scenery along the way. It looks breathtaking – emotionally and, I’m sure as I will discover, breathtaking physically!

I’m hoping that I’ll get plenty of opportunities to learn more about the country and its people. I’m intending to write another book and have already started to do some of the background research. I’ve got a crate full of guidebooks, literature, DVDs and other resources that I’m gradually hoovering up into a note book (well an iPad if you must know) that I can refer to on the journey. I’m also planning to use the ride to raise funds for my favourite charity – Green Light Trust. And yes, I will be coming around to ‘knock on your door’ for support.


In the run up to my departure, and alongside my usual riding reports, I’ll be blogging occasionally to let you know how the preparations are going. So keep checking back .....