After yesterday’s outing I felt the urge to repeat the experience. In fact, quite literally because for part of today’s ride I rode along a stretch of yesterday’s Sportive course – which I had also ridden twice yesterday. Still with me? Well it doesn’t really matter if you are or not.

Today’s objective was to explore the South Elmham villages which lie south west of Bungay and above the Waveney valley. Well I say “above” but altitude is a notional concept in Suffolk. The River Waveney lies at an altitude of about 20 feet hereabouts and the highest of the villages is at 145 feet. This part of Suffolk is often called ‘Saints Country’ as there are several villages each named after a saint, that of their parish church. There are twelve saintly villages: All Saints, St Andrew, St Cross, St James, St John, St Lawrence, St Margaret (South Elmham), St Margaret (Ilketshall), St Mary, St Michael, St Nicholas and St Peter.

Here’s what the Suffolk Churches website has to say about them: 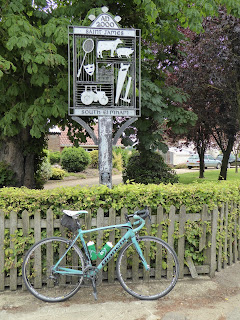 “The churches of the Saints have a subtle charm, one that is not at all apparent to some people. Here, there are no famous monuments, no historic rood screens and few other medieval survivals. Fragments are scattered; an Easter Sepulchre and dado panels at St Margaret, the castellated roof brace that must have been part of the canopy of honour at St John, the bells at St Peter. There is also the ruin of what is usually referred to as South Elmham Minster, a church in the woods in the parish of St Cross, half a mile from the nearest road. It is an amazing place, set in the middle of an ancient, possibly Roman, fortification. It was probably not a Minster, but its origins are shrouded in mystery.

Apart from the churches, there are only two buildings of note; these are South Elmham Hall in the parish of St Cross, part of the former summer retreat of the Bishops of Norwich, and St Peter's Hall, former home of the Tasburghs, a local landed family, in the parish of St Peter. The beauty of the Saints is in their bleakness, their remoteness. There are no shops, no pubs. Only three of them have proper villages at all. Instead, we find scatterings of modest farmsteads, 19th century cottages, farmworkers' council houses. And entirely rural village churches, of which only one, incredibly, has been made redundant. There is something trainspotterish about visiting them all.

By my reckoning I managed to ride past or at least see in the distance seven of the churches. So I’ll have to return to bag the set though that might involve a sport of walking.

One thing that did strike me about this area is that it has seemed to encapsulate almost every type of countryside that Suffolk has to offer, with the exception of the Breckland heaths and the manicured horsiculture of Newmarket. The Suffolk Churches website refers to the area as wide, remote, scattered and traditionally lawless. I could certainly appreciate the first three descriptions. As to the lawlessness I can only assume that with so many churches in such a relatively small area there must have been a lot of sinners looking to repent.
Posted by Captain Century at 19:48 No comments: 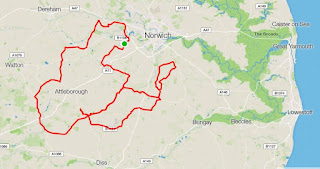 Another sunny day and another Sportive. This one was the CSUK Norfolk Sportive which I’ve ridden in for the last two years. It’s a local event, based on the southern outskirts of Norwich, and broadly heads south towards home on roads that I am quite familiar with. The route is slightly unusual as there is only one feed station (visited twice) so there are two circular loops within the overall circuit and you ride one stretch twice. I think the reason for having one location for the feed station is to help the organisers keep their costs down. I don’t really mind this, especially since CSUK use the event to raise money for charity. This year they have linked up with Southwold & Hunstanton Lifeboat Stations to help raise funds to keep them saving lives at sea during 2016. During her lifetime my mother was a fundraiser for the RNLI so I am very happy to play my (tiny) part in supporting them.

About a week before a Sportive the organisers email out a booklet with full details of the event including signing-on times, signage, rules and regs and so forth. They also provide route maps and downloadable Garmin files that riders can load onto their GPS units – so no excuse for going off course or getting lost. Well, in theory at least! Being an old fashioned sort of rider I always like to take a paper copy of the route with me in my jersey pocket. That’s got me out of trouble more times than I care to count.

Well, on looking at the GPS file on my PC I noticed that the total route distance was coming up at 97 miles. Disaster!! Several checks and calculations later I was still stuck with 97 miles. Well, in this 60 Centuries endeavour 97 miles just doesn’t cut it. So what was I going to do? There seemed to be two options. Either to deliberately go off course somewhere along the way to ‘snaffle’ the extra miles, or get to the end and keep going for the additional three miles. 100 miles is 100 miles, not 97 miles. Imagine if you went to the bank for £100 and you received £97. You wouldn’t be a happy bunny. So in the same vein I had to get my 100 by one means or another. I eventually decided to tack them on at the end of the event. That way I could get the near-exact difference and also wouldn’t be thought off as an idiot by my fellow riders if I went off course along the way. 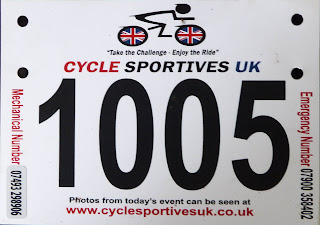 So with that in mind I rolled up at the start, the Crusaders Rugby Club, Little Melton, signed on, received my rider number (1005) and was on the start line and ready to go at 7:55am sharp. After a safety briefing from the organisers I was soon underway. I made good progress and was a group formed moving along at a good pace (20mph). The sun was out so it got quite hot and I was drinking regularly to stay hydrated. The first feed stop was at around 35 miles so I was trying to bear that in mind as I slurped my energy drink.


We made good time and were soon near Buckenham. Now those of you who know this part of south Norfolk will know that there are two Buckenhams – Old and New. I was busy concentrating on the wheel in front of me when we made a sharp left turn, because I thought, of a temporary road closure. After nearly two miles a light went on in my head. We were heading towards Old Buckenham; the feed station was at New Buckenham. Time to consult that paper map. Most of the others in the group were head down and pedalling with determination. So with a shout, which was ignored by the others, I pulled up and quickly confirmed that a U-turn was in order. (You can see the 'detour' on the map above.) A two mile backtrack and then another mile along the route saw me in New Buckenham filling up my bottles and scoffing a welcome banana. And joy of joys, I might now just complete the hundred without any extra riding.

The rest of the ride was pretty uneventful, pleasant but uneventful. As we approached the finish I reckoned that it was going to be touch and go for the century. In the event I crossed the finish line at 100.9 miles. Phew! And I have no idea what happened to the rest of that group. They could by now be in north Norfolk heading for the sea. Who knows!
Posted by Captain Century at 18:57 No comments:

My legs felt quite good this morning after yesterday’s blast round east Suffolk. It also promised to be the warmest day of the year so far with temperatures forecast to rise to the high 20’s. So this was a great reason to get the bike out and ride. The route today was up into south and mid Norfolk through some gently rolling countryside. A slight breeze took the edge off the heat as the day warmed up.

With clear skies and long, straight roads I was really enjoying myself. And the roads seemed much quieter than usual so I could spend more time looking around and less worrying if I was either going to be rear ended or forced to swerve into the verge by an oncoming 4x4. Yes, both have happened to me – I was once rear ended at a roundabout by a driver who thought I should have nipped through the oncoming traffic on a major dual carriageway. I had the last laugh though because immediately behind the offending driver was a police car whose occupants clocked it all. As no real damage was done to me, just a knock to my dignity, I was able to leave the ‘scene of the crime’ pretty quickly. Said motorist however was getting quite a going over from (nice) Plods who certainly weren’t plodding. “Do you have your documents Sir? Is this car yours? Have you looked at the Highway Code recently?” That last one brought me up short. Okay, when did you last look at the Highway Code?

Anyway, enough of this! The main feature of today’s ride was liquid, lots of it. I reckon I drank close to four litres of assorted fluids to avoid dehydrating. Some energy drinks that I brought with me; some mineral water and two cans of coke (full strength for the sugar dear reader) as well as a very welcome ice cream. I stopped twice to restock – at Litcham (roughly half way round) and then at Banham with just under 20 miles to go. Ironically, I felt hottest when I stopped under the full sun with virtually no shade. Riding along was fine with the benefit of that light breeze that was reasonably cooling. And with only Norfolk ‘mini hills’ to ascend I hardly broke sweat. The biggest challenge as the day advanced was the road surface where the heat of the sun had started to soften and melt the tar in a few places. The roads round here are heavy enough as it is without having to contend with riding through treacle! 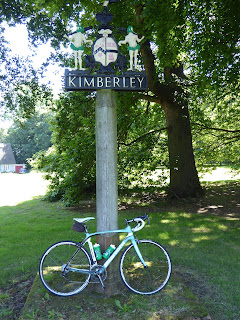 After last week’s visit to Denver (C#21) today’s notable village was Kimberley – but with no diamonds. Or at least if there are diamonds here then they are a closely guarded secret. Kimberley is a small village notable for the Wodehouse family who have lived here since the 1370’s. One of the Wodehouse’s distinguished himself in the Battle of Agincourt and was granted large estates by Henry V as a reward. The grounds of Kimberley Hall were designed by Capability Brown.

So there we have it a very pleasant ride in great weather – more please. And if you’re wondering what the Three Hams in the title above are then look no further – SwaffHam, DereHam and WymondHam all of which I rode through. It’s the heat, don’t you know!!

Posted by Captain Century at 18:49 No comments: