Well there I was riding along in a world of my own. I was engaged in a little spot of virtual Taffy bonding when without any warning, a roe deer leaped out of the trees and landed right next to me. So close that if I had I twitched my left elbow we would have made contact. In that split second, which seemed like minutes, I thought I was about to hit the tarmac. I leaned frantically to the right in an attempt to gain space but expecting at any moment to be bumped off by a serious lump of venison. I don’t know who was more surprised – me or Bambi. But incredibly, Bambi leapt in the opposite direction back into the trees. So I escaped unscathed. Was this an omen for an “exciting” ride?

Anyway, back to the virtual Taffy bonding. By dint of my father’s family being Welsh as well as having lived in that glorious country for several years I consider myself to be a little more than an honorary Welshman. And I’m proud of it – anyone who studies my bike frames closely will realise that. So, the virtual Taffy bonding was with Geraint Thomas who yesterday excelled at the Tour de France with a great bit of riding in support of Chris Froome who was in the yellow jersey. The Froomedog had managed to get the jump on his rivals and gain a few precious seconds. G, as he is known, realised what was happening and after some really hard riding managed to close the gap on the breakaway and join in the fun and help his team leader. The effort of doing this, written across his face, was a vivid illustration of the commitment from a true professional.

By an amazing coincidence I just happen to be reading ‘The World of Cycling According to G’. This is not your usual cycling bio; instead G shares his views on all sorts of riding issues and also on some of the people he has ridden with. All with a good dose of G’s trademark humour. Here is a man who really seems to have his feet firmly in his pedals. I can think of a few other riders who could learn some lessons from G. So I say to my compatriot – “Cymru am byth! Boyo!!” 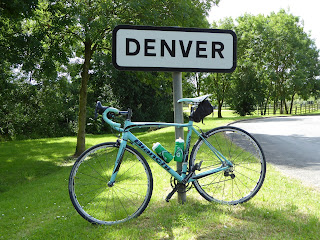 The focus for my ride today was Denver and that elusive sign (C#14). And following the recent trend I rode the route the other way round. Success too, I managed to find the sign and then after taking the obligatory photo set off southwards for a glorious ride across the Fens along the side of the River Great Ouse as far as Queen Adelaide. Now there’s a place name to conjure with. I’ll be back to find out more. 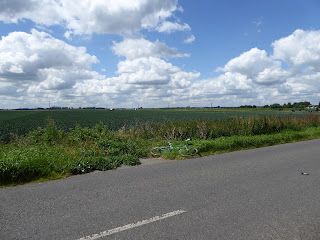 The riding, under blue skies with cotton wool white billowing clouds, was simply outstanding. A light tail wind meant that I maintained a steady speed before turning and riding gradually eastwards back to the Brecks and home. Once again I found the immense scale of the fenland landscape simply breath taking as I could see for miles and miles in every direction.

All too soon I was back on ‘home ground’ and reflecting on a great day’s riding. And thankfully no more encounters with Bambi either.

Posted by Captain Century at 12:28