Today I was on a bit of a mission! When planning a ride I usually try to include a specific focal point - a place to visit, or a 'new' bit of countryside, or sometimes a curiosity. Well, today my ride achieved all three of these goals. My main objective was to find a rather unusual sculpture that I had spotted a couple of years ago. A bit of research on the Interweb helped me to pinpoint its location. So that became my initial goal. Plotting the route gave me the chance to include a few new lanes and as it was a lovely sunny day I thought I could ride out to the coast at Aldeburgh as well.

So under a lovely blue sky, a warming sun and a nice gentle breeze I headed east towards the coast passing through Framlingham and then by that wonderful crinkle cranke wall at Easton (see 11 April blog). I was soon beyond the A12 road and into countryside that really did have a coastal feel to it. Everywhere felt and looked fresh - is our summer really here at long last. I do hope so; the heavy grey overcast skies and northerly winds have been a feature of our weather for far too long. And besides, riding under clear skies with the swish of rubber on warming tarmac is just the best way to cycle!

I was soon in bustling Aldeburgh and then turned to ride parallel to the coast towards Thorpeness with the House in the Clouds (I'll write about this on another ride) and Sizewell Power Station (I won't be writing about this) on the horizon. By the time I got to Thorpeness (about 50 miles from the start) it was pretty warm so I stopped at the village shop for an ice cream and a cold drink. The woman running the shop asked where I had come from and then gave me what can only be described as an unbelieving stare which brought any attempt at further conversation to a rapid end!

Feeling refreshed, I headed off to Leiston and then on to Middleton where I hoped to complete my mission. Sure enough, as I approached Middleton there he was - a magnificent and slightly larger than life steel cowboy! But there was more to come because by chance its creator, Paul Richardson happened to be there unloading a mini digger. So introductions were made and Paul told me a bit of the background - the cowboy was originally displayed on the platform at Manningtree station, with an American Indian sculpture on the opposite platform. Paul said I was welcome to have a look around his yard at the some of the other sculptures there. And what a delight they were! There's lots more information about Paul and his work on his website (click here). So thanks Paul for some great work and the chance to see it. 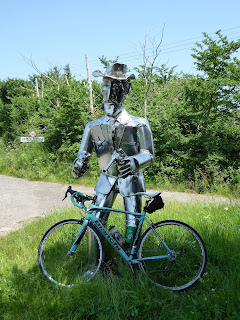 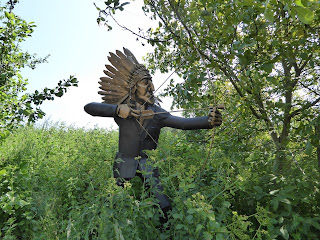 I could easily have lingered longer but I needed to get underway again before my legs seized up! So from Middleton it was a easy spin across to Dunwich which is gradually disappearing under the sea (I'll be back here to look around a bit more). From Dunwich I turned westwards for the ride home. And along the way I was able to ride along some lanes that were new to me. All to soon though I was back across the A12 and into the heart of Suffolk with a great ride home via Stradbrooke, Hoxne and Eye.

What an enjoyable day!

Posted by Captain Century at 18:09