Well hello there. First up apologies for the silence. I realise it’s been 3 weeks since I last posted a report here. You might even have thought that I had gone to sleep, or worse still, given up riding! Well, neither’s true. I haven’t been asleep, apart from the standard nightly 8‑hour quota, and I certainly haven’t given up riding. Since I lasted posted a report on 2nd September I’ve ridden about 800 miles – mostly shorter (50ish miles) with a few sessions on my turbo trainer in the garage.

The shorter rides have all been local ones and pretty routine so I didn’t want to bore you with inconsequential trivia! Hah! Whilst turning the cranks on the turbo I’ve watched a couple of episodes from Season 3 of Y Gwll (Hinterland for those who don’t speak the language of heaven). Y Gwll is a bit like a Welsh version of the acclaimed Scandi-thriller, The Killing and is set in Aberystwyth and the surrounding countryside. I know the area quite well as I used to work out of an office in Aber in the early 1980’s. Our office was just a few doors along from the building which is used as the police station in Y Gwyll.  So, it’s quite fun to watch and certainly makes alleviates the potential boredom of pedalling hard and going nowhere!

I’ve also been really busy for the last few weeks. Some work for clients – yes, I do actually do some work from time to time for a small and select group of clients who keep me in inner tubes, chain oil and other riding essentials. I’ve also been working on the final stages of the top-secret project which is now close to completion with the launch looking likely at the end of November. Much of this has involved working with a designer. I’ve learnt the hard way that a Pantone can manifest itself in several shades depending what the colour is being applied to. Anyway, I hope to be able to sign-off the final design in the next few days and I am expecting the near-final prototype very soon too. So watch this space as my lips are sealed. 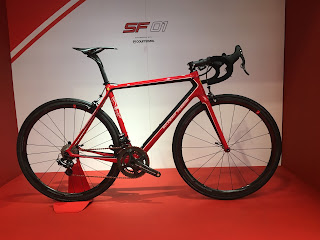 A couple of days ago I went to the cycle show at the NEC in Birmingham. This is a chance to get close to and sometimes handle the latest bike porn. It’s also a good opportunity to catch up with Uncles Andrew and Pasq and Aunt Lucia on the Bianchi stand. This year the Bianchi display was splendid with the product full range on display. Several of the bikes were being shown off in the new 2018 colour schemes and equipment configurations. There were lots of people milling round the large stand admiring and, in one case literally drooling over the bikes. I was pleased to see that celeste was still the defining feature of the stand although black seems to be the contrast colour of choice for 2018. Also on display was the SF01. This is the result of a new collaboration between Bianchi and another iconic Italian company, Ferrari. The SF01 is based on the Specialissima and comes with high end components. The frame is finished in Ferrari red and despite being a celeste addict, I have to say that it does look rather splendid. The influence of Formula 1 oozes from the bike. 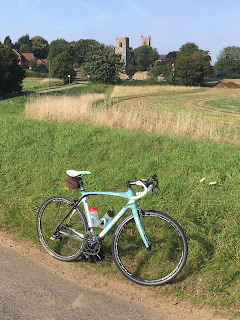 For today’s ride I went out through Stradbroke, Halesworth and Beccles returning via Loddon, Newton Flotman and Banham. It was a lovely sunny day with a bit of wind. Although, officially speaking it is now autumn, today was one of those days where summer seems to have had a last hurrah. I’m hoping for several encores. The signs of autumn are evident though. For me two key pointers are browning trees leaves and sugar beet being harvested. I saw plenty of both. I stopped in Loddon to refuel and then as I passed by Shotesham I spotted two church towers about 100 yards apart. With my curiosity piqued investigations revealed that one was a ruin and the other was still intact and in use. Post‑ride investigations on the Interweb revealed that the ruined one, St Martin’s, is thought to have been abandoned in the 17th century. The other one, St Mary’s hosts a monthly service. I also discovered that Shotesham has two more churches, All Saints and St Botolph’s. The latter is also a ruin, thought to be abandoned at the same time as St Martin’s. Why there were so many churches in such close proximity remains a mystery.

Whilst riding today I spent quite a bit of time reflecting on recent events in the cycling world. The last few weeks have been phenomenal. First up was the Froomedog who added the Vuelta a España to his Tour de France victory. He is only the third rider to have achieved this feat and the first to do it since the Vuelta was moved in 1995 to take place after the Tour. In many ways, the Vuelta is my favourite Grand Tour. It always feels to me like a riders’ event ‑tough and gritty with a little less of the razzmatazz that accompanies the Tour and to a lesser extent the Giro. The Froomedog's victory was richly deserved through a combination of canny attacking and support in depth from his team who defended the lead when it was being threatened.

The Vuelta was without doubt made even more exciting with the repeated attacks by Alberto Contador. Unfortunately he was ill during the first week of the race which put paid to his overall GC aspirations. But that didn’t stop Bertie/El Pistolero from lighting the touch paper once he was back to full strength. This was his last race before retiring and as a home event he obviously wanted to do something special for his supporters and fans who each day lined the roadsides with an almost a religious fervour. His solo victory on the penultimate stage at the top of the fearsome Angliru climb was truly magnificent and richly deserved. The sight of Bertie riding round the finishing circuit a few yards ahead of the peloton on the final day’s stage in Madrid brought a tear to many a fans eyes. 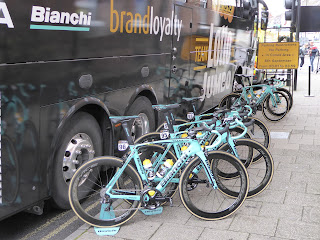 September was also the time for the Tour of Britain which this year started in Edinburgh and over seven stages made its way to Cardiff. As the 6th stage was local one I made my way over to the start at Newmarket to have a look at the teams and their bikes. One of the great things about road cycling is that it is still possible for spectators to wander freely amongst the team buses and get close to the riders and their bikes. There are a few barriers immediately around the start and finish areas but otherwise there are few, if any obstructions to impede a close-up look-see. I had a good gander at the Lotto NL Jumbo bus and the team bikes. Can I just say at this point that the final result of the Tour couldn’t have been better. It was won by Lars Boom. Why is that so good? Well Lars rides for Lotto NL Jumbo and the team rides Bianchi XR4s. Passione celeste!

In my little mental wanderings on today’s ride I also reflected on another phenomenal achievement. In my post for 3 July I commented on Mark Beaumont who was setting out to break the record for riding around the world. He was aiming to complete the 18,000 miles in 80 days a la Jules Verne’s Phileas Fogg. Well on 18th September he rode into Paris 17days, 14 hours and 40 minutes after setting off. What a truly outstanding achievement. You can find out more about this epic ride on his website (click here). He usually writes a book about his rides so I ‘m looking forward to it and maybe even a filum? Chapeau Mark, Chapeau. My humble little rides pale into insignificance alongside those of my namesake. Andon that note – good bye readers. I’m hoping it won’t be another three weeks before I communicate with you again…
Posted by Captain Century at 18:30