Today I hooked up with Daren (Nairo) Morgan for a ride up to North Norfolk. Several weeks ago I had noticed some road signs to a couple of intriguingly named villages which I hadn’t visited before so they became today’s goal. More about them when we get there! We planned to start and finish in the town of Watton and had agreed to meet at 9:00am sharp. Nairo was quite insistent about the timing as he had to get home for an Easter Sunday family lunch. I suspect that he might have either overslept or, more likely, had engaged in some pre-departure faffing because while I was sitting in the car park at 9:00am I received a text from him saying “20 mins away! It’s raining.” Oh well a few extra minutes to observe the early morning rituals of the good citizens of Watton.

When Nairo arrived he brought the rain with him. This year has certainly been very wet – the fields are drenched, the roadside drains are struggling to cope with the runoff so that the roads themselves are often covered in large puddles, sometimes masking the bike riders nemesis – potholes. With less than total enthusiasm we got our bikes ready and set off in steady drizzle. I have recently invested in a new rain jacket – a Castelli Idro. Although it wasn’t cheap, even after managing to source one at a substantially reduced price, I can confidently say it is the best rain jacket I have ever worn. Light, close fitting, fully waterproof and fully breathable it has transformed wet riding for me. Gone are the days of a rain jacket that traps sweat and eventually is as wet inside as it is outside. One of its best features is that when you take it off, you give it a quick shake to remove any residual water droplets and it’s ready to be rolled up to store in my jersey pocket as if it has never been used. I am going to be interested to see how it lasts.

All was going swimmingly until we arrived at the village of Bradenham where we almost had to do a bit of swimming ourselves. The ford was in full flow so we had to pedal through it with water flowing above my quite deep wheel rims. Then as we descended gently to Scarning we arrived at a much deeper flood with no chance of riding through it. We had to double back to detour, adding a mile or so to the route.

We whizzed through Dereham and soon passed North Elmham with its ruined Saxon Cathedral before arriving at Guist. On the west side of Guist is Sennowe Hall, built in 1774 and remodelled in 1907 by Thomas Albert (‘Bert’) Cook the grandson of Thomas Cook who founded the well-known travel firm. Bert tired of running the family business and left it in the hands of his two brothers while he decamped to Norfolk to engage in a more relaxed rural lifestyle. I know this because I once had a customer there. 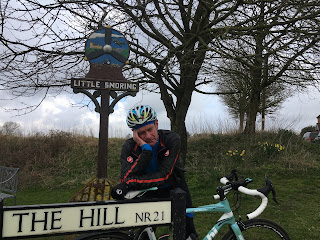 Crossing over the main Norwich to Fakenham road at Guist is almost like entering a new country. This is a quiet area with a strong sense of wilderness despite its proximity to Fakenham. Turning west just after Wood Norton I began to get quite excited as my main goal for today’s ride was approaching. We passed by Fulmodeston and Kettlestone and then we were there – at the village of Little Snoring! What a lovely name and what a lovely place. We paused to take a photo before heading on to Little Snoring’s big brother – Great Snoring. Both villages were remarkably quiet – with chirping birds the only sounds we could hear. 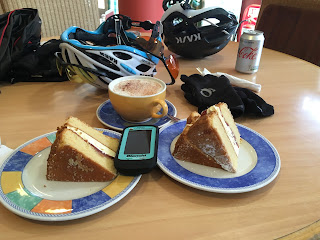 So, from my perspective it was mission accomplished. Daren on the other had a quest of his own – Norton’s Café in Little Walsingham and an appointment with Victoria. We soon arrived there and Daren wasn’t disappointed. He had been raving about their Victoria Sponge ever since our last visit (23 February 2018). On that occasion I had a lump of Nelson’s slice (sic) so this time I thought I would see if Nairo was right about the sponge. So the order went in – one cappuccino (me), a can of coke (Nairo) and two slices of Victoria Sponge. My slice turned out to be nearly twice the size of Nairo’s which didn’t go unremarked. So much so that our server dished up a second slice for Nairo (look closely at the photo) who was now a happy chappie. I had a quite smile to myself as I remembered that the only way out of Walsingham is uphill! And for the record, Victoria was every bit as nice as Nairo had claimed!

Suitably refreshed, or over-refreshed in Nairo’s case, we set off for the return leg. We had to make another detour as the two fords over the river were impassable. This is definitely not the season for taking shoes off and wading! Eventually, after riding along some pretty sketchy roads we managed to re-join the route. By now the Infinito which I was riding today was caked in mud. Fortunately, neither of us had a puncture which was my greatest concern.

One we were back on a decent tarmac road we soon passed through the edge of Fakenham and with the benefit of a light tailwind were making good speed. At this point the weather did its worst and instead of another rain shower we got caught in a lively hailstorm. That certainly brought a glow to my cheeks and not because of the riding effort! As we rode along I started thinking of today’s Tour of Flanders which I guessed was going to be quite a challenge for those racing it. This type of Belgian racing is proper hard riding. I even began to dream (hallucinate) that I was in the race. Eventually the hail stopped, my rain jacket having done its stuff, and we were able to resume our conversation.

I thought I rather excelled myself at this point because I looked across at Nairo and said, “There you are, you don’t have to be in Belgium to ride like a Belgian.” I’m guessing that this must have impressed him (he laughed at the time) because he’s nicked my words of wisdom as the title for his Strava post for the ride. Being the decent sort he is I am pleased to see that he’s attributed the words to me. Thanks Nairo!

The last 10 miles were uneventful and we arrived back at the car park in Watton, damp but happy. Let’s hope we are in for some drier weather – soon. The way things are though I wouldn’t be surprised when I come back from the US of A in July that a hosepipe ban is in force. These days, anything can happen and probably will.

Posted by Captain Century at 19:15