The organisers of most sportives are at pains to emphasise that they are personal challenges and not races. I have even seen one or two organisers giving some riders a telling off when they are seen to be behaving like racers. Of course it’s pretty difficult to strike the balance when riders have been given a timing chip and are riding against the clock and also trying to achieve a high place in the overall standings. The official line is that sportives take place on open roads being used by other people. And I have a vague recollection that somewhere in the Highway Code it says that racing on public roads is not permitted.

The Tour of Cambridgeshire is rather different though. First and foremost, it is billed as a race – a Gran Fondo (Big Ride). There is a special category for riders holding licences to race against each other. The ‘Sport’ category is open to those who want to have a stab at riding fast (i.e. racing) in a bunch with other cyclists. Unlike a sportive when riders are set off in small groups, Gran Fondo riders all start together rather like a marathon. It’s still a ride against the clock but with everybody setting off at the same time it has a race feel to it.

The first Gran Fondo was held in 1979 in Italy and they have since grown in number and spread across the world. The Tour of Cambridgeshire, which was first held in 2015 (I rode it) is also one of the qualifying events for the UCI Gran Fondo World Championships which will be held in Albi, France in September. The first 25% of finishers in each age category are eligible to ride for their country at the Worlds.

Two other things set the Tour of Cambridgeshire apart from sportives. First the size of the field is much bigger with up to 8,000 riders taking part. The second point is that it takes place on fully closed roads. With the number of riders taking part, closed roads are the only way the event could run. All this means that the organisation and rider experience is rather unique. 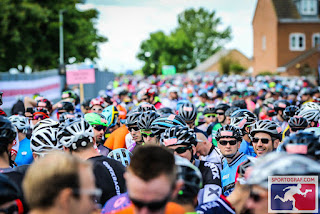 We gathered together in the starting pens at Peterborough Arena at 11:00am. Then it was a long wait until the actual start – I rolled out at just after 12:30. Fortunately it was dry and warm so the wait was mostly a case of being bored and trying to think up better ways to organise the start and avoid the waiting around. Standing around there was certainly a real buzz in the air. 8,000 riders packed tightly together are unlikely to be quiet! Slowly, ever so slowly we eased towards the start line and eventually rolled out of the Showground on to the main road. Ahead, behind and all around me were masses of tightly packed cyclists. From above we must have looked like a swarm of bees like to see in cartoons. The pack split up into smaller groups of 100-200 riders fairly quickly as people found their natural rhythm. 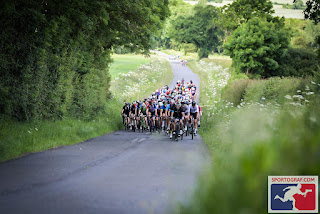 The early stages of a mass start like this are quite risky. A combination of riders not used to being in a large group; riders moving forwards and backwards through the peloton; and the road conditions – some quite narrow and undulating roads early on mean that speeds oscillate significantly. Close concentration is absolutely required to avoid collisions and crashes. I was fortunate to escape unscathed; for others sitting or lying at the roadside their event was already over. After about 20 miles it had settled down and most people had coalesced into groups of similar ability. Heightened road awareness was still critical though as groups still caught or were caught by each other. When groups are passing through each other the inevitable change of rhythm risks further collisions.

One of the great things about the Tour of Cambridgeshire is the public support it receives. In every village local people were at the roadside cheering us on. Heading up a short rise at Alconbury there was quite a large and vocal crowd which always gives me a boost and I try to respond by turning up the style, or at least my unique version of style! 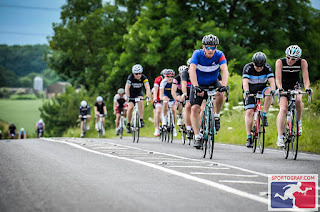 Today was also pretty windy so as we headed gradually east into the Fens speeds picked up significantly. And the benefit of riding in a group meant that the effort involved was significantly less than riding solo. Going so fast I eschewed the feed stations and decided to ride the whole event non-stop. My only real mistake was on the long straight towards Pondersbridge where a few seconds loss of concentration meant that I was quickly off the back of the group I had been riding with. No matter how hard I tried, riding into the headwind, I just couldn’t latch back on. I got within about 30 yards but simply couldn’t close the door so I tried to limit my losses until we turned out of the wind. Wise decision because as the group slowed for the turn I closed up and was able to tuck myself back into the bunch. 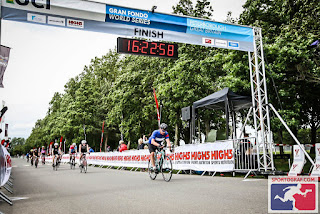 One of the real highlights of the event is riding through Yaxley. By this stage the riders have largely thinned out as the distance takes its toll on less fit riders. The crowds in Yaxley are usually the largest and having spent most of the day at the pub, are pretty vocal. Again good for a mental boost. The final few miles retraces the first part of the route in reverse before sweeping across a couple of roundabouts. Then it's into the finishing straight where I even managed to get the jump on the group I had been riding with.

Having collected a (non-alcoholic) beer it was then a long wait to see if I had qualified for the Worlds. I reckon that I actually spent more time standing around before and after the event than did riding! I completed the ride in 3:45 at an average speed of 21.2mph – my fastest time ever in the event. And for the record I missed the cut by 10 places; I was just over 2 minutes too slow! Oh well, maybe next time ……..