Yesterday’s century ride was really enjoyable so on the basis that you can’t have too much of a good thing I decided to do another one today. Having ridden north east towards the edge of the Broads I decided to go in the opposite direction today and ride south westwards into Cambridgeshire. I left home at almost the same time as yesterday and as I was to discover this was only the first of a few coincidences. I was feeling pretty good too – both physically and mentally. My good mood was boosted by Geraint Thomas who continues to wear the Yellow Jersey. I suspect his days are numbered though as the Tour approaches the mountains (the Vosges come first) I am sure that he will have to revert to his more usual role of domestique in support of his team leader, the Froomedog.

Getting around Bury was a bit of challenge since I was riding at the peak of the early morning commuter rush. The traffic jams now seem to start nearly ten miles to the north. The congestion was made worse by some roadworks on Tut Hill (lovely name) which didn’t seem to be correctly synched to the traffic flow. This wasn’t a problem for me as I was able to ride past the queue despite some motorists playing games by pulling close to the kerb to try and block my progress. Well that’s what it felt like. I simply pulled out and rode up the middle of the road giving a big smile to all those that I passed. I received several scornful looks in return. (Get a bike!) Do I sound like I’m gloating here? Probably. Do I care? Definitely not! 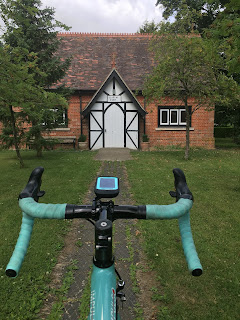 Once I reached Westley I was free of traffic and had the road pretty much to myself. As I got closer to Cambridgeshire I began to dodge up and down the lanes (have a look at the flyby) as I picked my way over the small undulations in attempt to squeeze in as much climbing as possible. Reaching Weston Colville I paused to take a photo of the Reading Room. This was founded in 1885 by William Henry Hall, the village squire, and Sedley Taylor who I think was a Professor at Trinity College, Cambridge. Taylor wrote about the science of music and profit sharing in industry. The two philanthropists were good friends who shared a vision of free education for all. Reading Rooms were established by the Victorians as small libraries and with periodicals for the local men to peruse. The reading material was often censored. Women were not allowed in the Weston Colville Reading Room until 1925 when a local branch of the Women’s Institute was inaugurated. The Reading Room subsequently became the village hall and is now widely used.

From Weston Longville I continued to meander around for a few more miles until I reached Balsham where I turned northwest onto a long, largely downhill straight towards Fulbourn with views of Cambridge beyond. I topped up my water bottles at the shop in Fulbourn and made the mistake of looking at my iPhone which had been making noises for the last few miles. I could see that I had received several emails and other messages (didn’t read them) but what caught eye was a message on my home screen “The Met Office has issued an amber warning of rain.”  As soon as I had read the message, the sky darkened considerably, the temperature dropped and the wind picked up. Damn and blast, it seemed that I was going to get a soaking. Fortunately for me the rain didn’t fall and the wind was behind me so I was able to sustain an excellent pace over the next 30 miles until I arrived at home.

Looking at my ride stats I discovered that the distance and elevation I had covered today were almost identical to yesterday. And my average speed was about the same too. Co-incidence or consistency? I like to think it’s the latter.

Posted by Captain Century at 18:30