Having gone north yesterday into Norfolk I decided today to head east for the coast at Aldeburgh and Southwold. I’ve ridden this route once before (see blog for 28 November 2016) so I was interested to see how today’s experience would compare. After adding my £4 to South Norfolk Council’s coffers I headed out of the car park from Diss bound for Stradbroke, Framlingham, Saxmundham and Leiston. I made excellent progress albeit with the hint of a headwind. 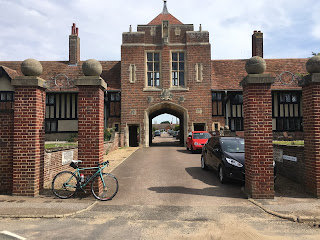 I soon reached Aldeburgh and rode out to the southern end of the town before turning north and riding along the seafront towards Thorpeness. It was pretty busy with people around the boating lake and in the various cafés dotted around the village. I had thought of stopping for a coffee but everywhere was far too busy for my liking so I kept going. As I was leaving the village an impressive gateway and some alms houses and an impressive gateway caught my eye so I stopped to get a picture. The alms houses were built around 1926 (so they are not as old as they might appear) by Glencairn Stuart Ogilvie as part of a much bigger scheme to establish Thorpeness as a holiday village. This rather unique, for the time, transformation of the former fishing village includes a boating lake with Peter Pan islands, a fairy-tale cottage on stilts, mock-Tudor houses and other amenities. The Ogilvie family were friends with J.M. Barrie, creator of Peter Pan, hence the islands on the boating lake – a sort of Never, Never Land. 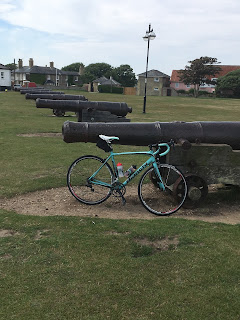 From Thorpeness I rode back to Leiston and stopped to say hello to the metal cowboy standing on the roadside just before Westleton (see blog for 8 June 2016). Then resisting the temptation to dip down into Dunwich, I headed straight for Southwold which, like Aldeburgh, was busy with summer holidaymakers. I stopped briefly to look at the cannons on Gun Hill. They were apparently given to the town in 1746 to protect local shipping from raids. During the First World War, it is claimed that the Germans believed that Southwold was a ‘fortified place’ which risked bombardment from the sea. To avoid this, the guns were buried. They were also hidden for the duration of the Second World War. 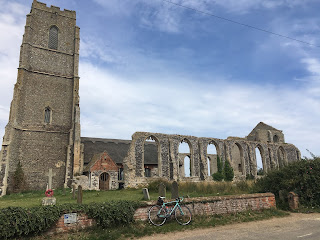 Despite the temptation to linger on the seafront I was on a mission so I headed north to my main objective for the day at Covehithe. The last time I was here I had spotted what looked like a very large ruined church. Judging by the number of cars parked nearby and the people walking around I suspected it must be significant. So today, with time in hand, I went to have a look for myself. What a surprise. With a declining congregation, the cost of maintaining the rather large building was prohibitive so apart from the tower it was demolished in the 1670’s and the materials were sold. A new, smaller church was then built inside the remains of the old one. Amazing!

Having completed my mission I headed back to Diss via Beccles, Bungay and Harleston. The wind had picked up noticeably and fortunately it was blowing from the east so I made excellent time as I sped along the Waveney Valley. This was my third consecutive century this week and at the end ‘the legs’ felt good so who knows I might go for a fourth tomorrow. Or I might not …!

Posted by Captain Century at 19:18