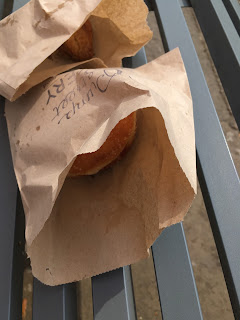 Today was a day that had been spoken about for quite a long time. Daren (Nairo) Morgan had noticed my penchant for riding to Orford. He was keen to find out for himself what the attraction of the ride was. And he also wanted to sample one of those doughnuts that I rave about. With the prospect of reasonable weather we were soon off and riding – Nairo on his Intenso and me on my Infinito. Or rather we weren’t quite off and riding because within the first mile came the cry “I’ve forgotten my heart rate monitor” and we had to turn around and return to the start so that Nairo could reclaim this essential item. Suitably equipped we set off again and this time made it out of my village and onto the open road.

I had planned the route to give Nairo the full 5-star experience and had added in a slight deviation to skirt the north and east of Ipswich so that we could cross the River Deben on the ferry to Bawdsey. What I hadn’t anticipated was a steady south easterly wind which meant it was in our faces for most of the outward leg. Nairo is a faster rider than me and also has a tendency to start off much quicker than I do. My approach is to ride at a steady, or even sedate pace that I can sustain for the whole day without fear of blowing-up. Consequently, with Nairo setting the pace into the wind, my legs were gently asking questions about what was up. As much of the route was new to Nairo I played the part of the good tour guide, pointing out places of interest as I rode along behind him. It took me a while to work out that much my commentary was lost to Nairo – the wind blew it away behind me.

We were going quite well as we passed through Debenham and Framsden. Shortly after Framsden Nairo’s bike developed a clicking noise – loud enough for me to hear. Now this is something that happens from time to time. I ride with Look pedals which are well-known for the ‘Look Click’. Another common cause is minor slippage of the rear wheel.  Loosening the quick release, jiggling the wheel and then retightening the quick release sometimes solves the problem. Occasionally it hints at bearing trouble in the bottom bracket which can be more terminal and is not something that can normally be fixed on the road. Nairo doesn’t ride with Look pedals – he favours’ Shimanonos so that ruled cause one out. At this point I should remind you that I have issues with riding an Italian heritage bike with anything other than Italian components. Nairo is much less fussy in that department.

When it comes to noises though it’s the reverse. I am much more forgiving and excel in the art of selective deafness. That’s one of the “benefits” of parenting – my selective deafness reached world championship standards during my children’s teenage years. Nairo on the other hand can’t stand a noise – he’s inherently an adjuster and a tweaker so anything mechanical making noises it shouldn’t is an invitation to stop for an adjustment or a tweak. Or sometimes, an adjustment and a tweak. And that’s exactly what happened as we approached Otley – a roadside pause and a rear wheel tweak. Unfortunately, it made no difference. In fact quite the opposite because following the tweak, or was it an adjustment, Nairo’s Intenso started making a new sound – a short of swish or whoosh, rather like something rubbing together. The click continued unabated. Both sounds only happened when he was pedalling. Freewheel and it was the sound of silence.

We carried on for a while – I was leading now and behind me I could sense Nairo getting a bit wound up. He was not a very happy rider. Leaving Grundisburgh it all got too much for him and so another roadside stop with a tweak and an adjustment was necessary. And the result? No change – click, swoosh, click, swoosh, click swoosh with every pedal revolution. Perhaps fortunately, as we turned to pass between Ipswich and Woodbridge the road surfaces became a lot rougher so that added another level of noise and one which seemed to mask the click and swooshes. And I think Nairo was becoming resigned to a noisy ride.

I soon had my own mini-mechanical to contend with though. Although it was overcast it was also very humid so we were both quite sweaty cyclists. We decided to stop in Trimley St Mary and rehydrate with a can of pop. Suitably quenched I clipped my right foot into the pedal and pushed off. As I clipped my left foot into its pedal, in addition to the usual loud click of contact, the pedal decided it was time to part company with its spindle. As I careered across the road, fighting to avoid bodily injury, Nairo, who was behind me, was in fits of laughter. Poetic justice perhaps for what might have been some of my less than helpful comments earlier about tweaking and adjusting. Fortunately, my mechanical incident wasn’t terminal and I was able to reattach the pedal and get going again – silently! 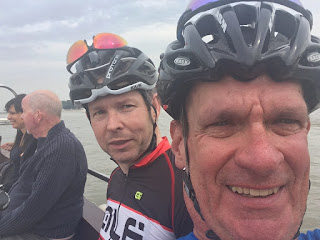 We made our way down to Felixstowe Ferry and crossed over to Bawdsey Quay before heading on to Orford. With a quick spin down to the Quayside at Orford we then headed back into the village for a late lunch stop at the Pump Street Bakery. I had been bigging-up the quality of the doughnuts to Nairo so I was hoping they hadn’t sold out. Although there were no raspberry ones left there was a nice stack of rhubarb filled ones so our order was placed. This being Nairo’s first visit he went the whole hog and snaffled a sausage roll as well. I was a bit more restrained – for once. I also discovered that this was Nairo’s first ever visit to Orford – by any mode of transport. So that was another first!

With the noticeable headwind most of the way down here we were looking forward to a wind assisted ride on the final 50 miles home. Unfortunately for us, Mother Nature had other ideas and whilst we had been lunching in the shelter of the village, the wind had turned to become a westerly. In other words, it was going to be a headwind home. Drat! The return leg took us back through Snape, Saxmundham, Framlingham, Stradbroke and Eye. This was only Nairo’s second century of the year so he was showing some signs of wear – brought on by a combination of miles, wind and yes, clicks and swooshes!

By the time we arrived back at my house we had ridden 114 miles which for Nairo was another first – the longest distance covered in a single ride. Sitting in my garden I asked him if he had enjoyed it to which he replied “I’ll need to think about that.” Well, that may be. I certainly had a grand day out.