It’s been just over a week since my last century ride so, with the prospect of dry weather today, I thought I’d better get back in the groove. But where to go? I’m running out of new places to ride centuries when they start and finish at home. A look at my road map of East Anglia is usually where I begin my planning. I colour in the roads I’ve ridden so it is easier to spot those that I haven’t been on before. What’s that you say? Obsessive – mmmmm. Compulsive – perhaps. Disorder – definitely and emphatically not!!

After studying the map for a while I noticed that there were a few roads east and north of Kings Lynn that I haven’t ridden. I decided to head towards Sandringham and then carry on to the coast road on the edge of Hunstanton and follow it as far as Wells-next-the Sea before turning south and heading gradually homewards. As century rides go this was going to be one of my longer ones at around 120 miles.

After a good breakfast, I was underway at 7.45 am heading for Watton and Swaffham. Then I carried on to West Acre where I turned on to the first of today’s ‘new’ roads. I then continued north west crossing the busy A148 road and entering the Sandringham Estate lands. It was immediately apparent that this was some special countryside. Everywhere had the appearance of being well-managed. The fields looked highly productive, the hedgerows were immaculate, and, to my forester’s eyes, the woods were in tip top condition. The various estate houses and buildings were all well-maintained. Although everywhere seemed to be in pristine condition there was also a strong sense of productive countryside. This was very much a working landscape. I suppose the owner has a rather unique influence and her eldest son is well-known as a pioneer of organic farming and environmentally friendly land management. 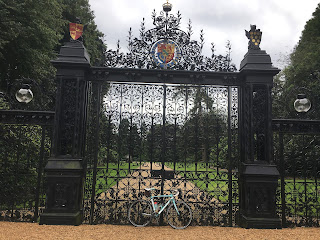 It was mid-morning as I was riding through the estate so I thought I might call in to see if I could blag a cup of coffee and perhaps have a catch-up with HMQ. So I turned towards ‘the big house’ to try my luck. The chap on the rather splendid gates told me that I was out of luck as the lady of the house had just taken the corgis out for their morning exercise and he had no idea when she would be back. Funnily enough when I last tried dropping in on her a couple of years ago at Balmoral, her Scottish holiday home, I was told just the same thing! I wonder if she’s deliberately trying to avoid me?  Hmm. 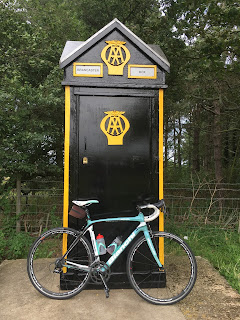 No matter. I wasn’t offended as she does have a pretty busy schedule so I guess opportunities to have a goss with the subjects are few and far between. So, onward. Maybe I could drop in for a sandwich with Desmond MacCarthy. I’ve been watching his series on BBC2 – Normal for Norfolk. In terms of property management Desmond has a very different approach to the folk at Sandringham. He once famously said that there’s lots of money in his place and most of it belongs to the Bank! Desmond is rather distinctive person. Instead of eyebrows he sports a couple of hairy caterpillars. A look at my map revealed that breaking bread with Desmond was going to have to wait awhile as my knowledge of North Norfolk geography was a bit off. His place was further along the coast beyond Wells where I intended to turn inland. The good news is that there is a nice cluster of roads around his house that I have yet to ride. So, Desmond, I will be back. 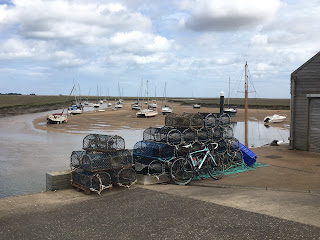 In my humble opinion the coast road is one of those roads that provides total enjoyment if you are a cyclist. The road between Hunstanton and Cromer is rarely more than a mile from the sea. It rises and falls across the small ridges of the land giving glimpses and hints of the sea. When the wind is in the right direction it can also be a fast ride. The succession of small villages, some very attractive, others rather more nondescript, but all calling out to the passing tourists, provide lots of interest. The only downside is that it is usually quite busy and its twists and turns can mean that in the war of motorist versus cyclist, frustration and even occasionally a spot of road rage erupts. Unusually today, the road seemed quite quiet. Maybe all the tourists are on holiday!  So the ride today was full-on enjoyment as I passed through Holme-next-the Sea, Thornham, Brancaster and Burnham Overy Staithe before reaching Wells-next-the Sea which was bursting with people all enjoying its delights.

I decided to forsake the opportunity to refuel here as any possible place I saw had a lengthy queue of people waiting to make their choices. So with no realistic prospect of a fresh Cromer crab sarnie (or similar) I headed south and inland, stopping briefly at Co-Op on the edge of town for a rather more mundane egg roll which did exactly what it said on the packet. The ride from Wells to Fakenham, Dereham and Attleborough was on roads that I know quite well so I just concentrated on tapping out the miles. I had one minor excitement when my Garmin and I had a disagreement about the best way to go through Fakenham. (I won.) This was the third time the Garmin had got bolshie in Fakenham. Maybe it will eventually realise that I am the master of navigation – in Fakenham at least. 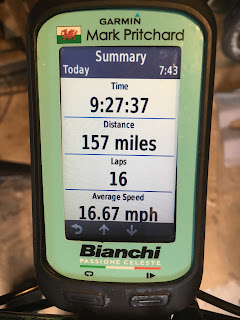 As I reached East Harling (120 miles), which I had passed through soon after the start of the ride, my legs still felt good so I decided to carry on for a while by throwing in an extra loop that would take the ride up to 150 miles. Apart from a heavy rain shower at one point the last leg was pretty comfortable going and I arrived home feeling surprisingly sprightly. As I pressed the stop button on my Garmin it told me that I had set a new distance record (157 miles) which was quiet satisfying; 152 miles was the previous longest distance recorded by the Garmin. And yes, I have ridden a longer distance in the past. My PB is 241 miles. But I did that (in 12 hours) about 40 years ago when I was considerably fitter than I am now. And in the interests of journalistic honesty I should add that after that effort I could hardly walk for a week!

Posted by Captain Century at 21:28