Day 1, Livorno to Colle di Val d'Elsa – And We’re On Our Way 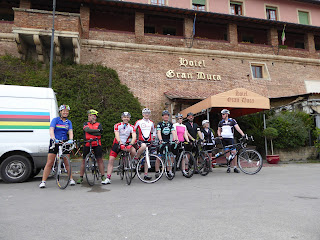 After a good night’s sleep and and an excellent breakfast it was time to be reunited with my bike. A few minor tweaks to the handlebars and a test ride to ensure my gears were working sweetly then it was time to pose for the group photo. Everybody seemed to be happy, perhaps with a touch of mild apprehension about what lies ahead. All too soon we were underway riding through the streets of Livorno amongst quite busy traffic. A minor altercation with a lady commuter cyclist reminded me to ride on the right. Although I didn't quite catch what she said there was no doubting her meaning!  The first 30 minutes or so were quite challenging as the roads were fairly busy. But fortunately we were soon well away from Livorno on quieter roads and in the open countryside. 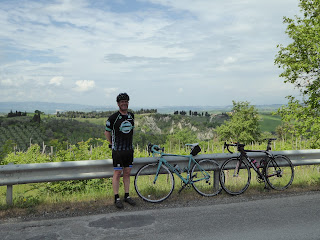 Very quickly the countryside changed and we were amongst some gently rolling hills, surrounded by olive groves and vineyards. Quite a few motorists gave us a friendly toot and a wave so clearly cyclists are appreciated much more here than back at home. Gradually the hills got higher and the got climbs longer as we rode through archetypal Tuscan scenery with lots of very attractive hilltop villages.


We soon reached Casciana Terme the history of which is linked to a romantic legend about the elderly Countess Matilde di Canossa. She used to have a bent old blackbird which, over time, started flying further and further away and returning more sprightly than before. The Countess discovered that the blackbird was diving into a pond of hot water which seemed to rejuvenate it. So too she started to bathe in the waters which soon cured the infirmities of old age and her gout. 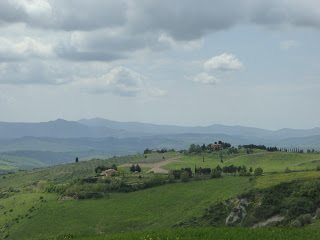 Leaving Casciana Terme we approached Volterra which is positioned on a hilltop at 1,700 feet above sea level. The climb up to Volterra was quite long (5 miles plus) with some fairly steep stretches – especially on the hairpin bends, and there were a lot of these! The views over the surrounding countryside were stunning.

Volterra's history goes back some 3,000 years to Etruscan times. Its relative isolation on the hilltop has limited the development of the city which is why it still boasts a spectacular medieval feeling. The town is well known as the city of alabaster which has been used over the centuries to make pots, goblets and ornaments. The translucent nature of the mineral gives the artefacts a unique appearance. 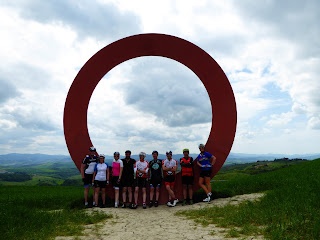 A fast descent from brought us to a strange 'O' shaped metal sculpture where Amanda and Martyn were waiting with to refresh us. Their was no explanation about the sculpture - Google Maps refers to it as the "Mysterious O". 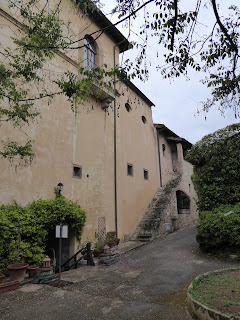 Then it was a fast blast, and a bit of an up and down roller coaster ride to Colle di Val d’Elsa and our hotel for the night. Colle di Val d'Elsa is a medieval town in three parts, known historically as 'Piano', 'Borgo', and 'Castello' and more recently as Colle alta and Colle bassa (High and Low Colle). Our hotel was rather unique as it was a converted Renaissance-era abbey, once owned by Cardinal Giuliano Della Rovere who went on to become Pope Julius II.

Posted by Captain Century at 06:09