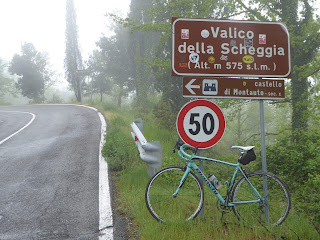 As I would discover, the word of the day would be “epic”. We awoke to grey skies and a mixed weather forecast. The key question was how far could we ride before the rain started? We all rolled out of Arezzo through the old town and were quickly into the valley of the River Arno. Gradually the hills came into view, shrouded by low cloud. Then it was onto the first main climb of the day. Five miles to the summit of the Vallico della Scheggia at 1,887 feet above sea level. Not a particularly steep climb, averaging about six percent, though a series of hairpins winding their way upwards through the oak forest. Exhilarating riding though.

I paused at the top to listen to a group of men who were engaged in a very lively Sunday morning discussion. Although I couldn't understand what they were saying it was pretty clear that they were putting the world to rights in that uniquely Italianate way with lots of hand and arm movements. And their views were being loudly and forcefully made. After my spot of eavesdropping it was time to set off for a rapid descent through some fast, sweeping hairpin bends where I was able to lean the bike hard over and maintain my speed. The smooth dry road surface meant that I was able to get into top gear and go full gas – especially towards the bottom of the hill when the road straightened and I could see further ahead. Epic riding indeed! 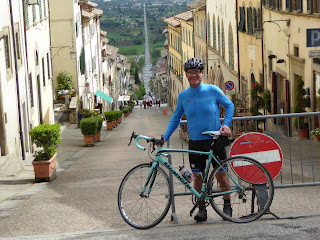 After a few lumpy miles, we arrived at Anghiari with a spectacular view down to the valley below and an amazingly straight road that we were going to ride on. The stretch downhill was closed to traffic with a small, but busy market in the square. Once on the valley bottom a tailwind meant that I was able to get on the drop bars, wind the gears up and enjoy a nice bit of time trialling until I arrived at the first of the day’s feed stops where Martyn and Amanda were ready and waiting with some of Amanda’s lovely, and by now near legendary boiled fruitcake. Just what the hungry cyclist needed. 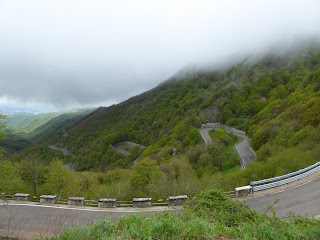 All too soon it was time to set off for the day’s main event – the climb to Vallico di Bocca Trabaria at 3,500 feet above sea level. This was classic Tuscan climbing. The road wound upwards though an amazing series of hairpin bends. Looking up was a fairly daunting sight as I could see the road heading unrelentingly ever higher. Apart from the left hand hairpins, where riding into the centre of the road was the best strategy to reduce the gradient, the climb wasn't too steep at around an average of five to seven percent. But what it lacked in steepness it made up for in length – about ten miles from bottom to top. So it was a case of getting in a low gear and tapping out a steady rhythm with the occasional out of the saddle session to stretch my leg muscles and ease my back.

About an hour after starting I reached the top and stopped to record the moment and then decided to press on before I cooled down as it was pretty cold by now. Within 100 metres of starting the descent it started raining. And not just a shower, this was rain of biblical proportions. The sort of rain that Noah built a boat to escape from. Within minutes the road surface was covered in free flowing sheets of water and was testing my riding skills to the limit. Not being able to pedal for fear of going too fast and crashing meant that I started to cool down pretty quickly. I was really glad of my wind and waterproof Castelli Gabba foul weather jacket (other makes are available readers). After about 30 minutes of descending I finally reached the valley below and pretty soon the rain stopped. I was then back on dry road surfaces which meant I could up the pace again and start to warm up a bit. 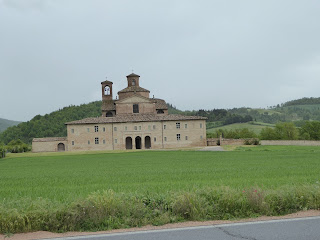 In my haste, hunched over the handlebars, I completely missed Amanda and Martyn who were waiting with hot drinks and food. When I was about 15 miles from the end of the stage it finally dawned on me that I must have passed them! So after stopping to text them that I was alive and (almost) well, I pressed on. I passed through Urbana and then as I climbed out of the valley the rain started again. If I thought the rain coming down the Trabaria was heavy then this latest storm was the equivalent of a tropical monsoon. Visibility was down to just a few yards and the bottoms of my wheels were now completely immersed in the surface water. Fortunately, I was soon at Urbino and was able to quickly find the hotel.

The hotel manager, Guiseppe, was my saviour. We overcame our language difficulties and I learnt that the rest of the group were abandoning the ride for the day. The bikes were being loaded onto the support van and Guiseppe was organising a taxi to bring the gruppetto in. The formalities of showing my passport and registering my arrival were swept aside and within minutes I was in my room. And Guiseppe even had a wry smile at the puddle of muddy water that I had left on his highly polished marble floor. In my book Guiseppe was definitely 'Mio Salvatore'. In no time at all I was in and out of the shower, dry and tucked up in bed keeping warm until the van and my dry clothes arrived. Although I was the only rider to finish today I took no real satisfaction from this. Instead I was just pleased to see Chris my room mate, and the rest of the group, arrive safe and secure. And when we sat down for dinner, everyone had their own unique story to share.

So there we are – an epic route with epic climbing and epic weather.