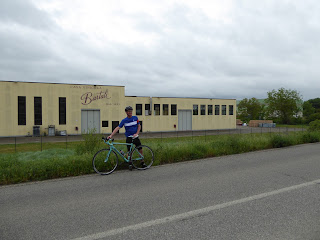 After a very efficient breakfast and checkout service we were soon rolling out of Colle di Val d'Elsa under grey skies heading for Arezzo about 50 miles away. For me the first highlight came after five miles when I stopped so that Matt could take a photo of me in front of the Bartali Winery. Gino Bartali was a legendary racer who won the Tour d France twice (in 1938 and 1948) as well as winning the Giro d'Italia three times. His feat of winning three consecutive mountain stages in the 1948 Tour de France has never been equalled. Today the winery is run by his descendants. Standing there and reflecting on his achievements was, for me quite a humbling experience. 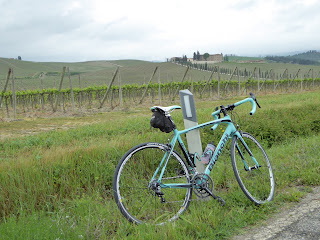 Back on the road we headed into 'Chiantishire'. Large vineyards dominated the view over the increasingly rolling, hilly landscape. Gradually the road got steeper as the first main climb of the day arrived - five miles uphill to Castellini-in-Chianti. Not that steep, except for some of the bends, but reaching the top in by now heavy rain, was a welcome relief! Then it was an exhilarating descent to Radda in Chianti. This stretch of road will be used in a couple of weeks time for the individual time trial of the Giro d'Italia. The riders will be going the other way and, I am certain, will be riding much faster than us. 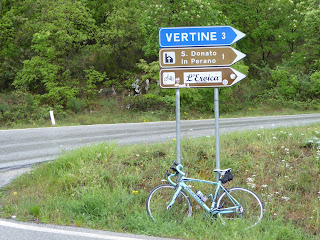 In addition to the forthcoming Giro the other cycling highlight was seeing several signs for L'Erocia which was started in 1997 by Giancarlo Brocci. He admired the traditional values of cycling so much that he wanted to reconnect others to the heritage that has inspired so much Italian history, literature, culture, and music. L’Eroica also became a Foundation for the protection and preservation of the last gravel roads in Tuscany. These romantic concepts led to the idea of L’Eroica, an event that initially saw 92 “hunters of feelings and emotions”, as its creator Giancarlo Brocci defined them. Today, L’Eroica continues to spread the authentic roots of an extraordinary sport with a great soul. It enables people to rediscover the beauty of fatigue and the thrill of the conquest: the heroic cycling of legends like Gino Bartali and Fausto Coppi. It’s a cycling philosophy that spreads respect and creates deep bonds between the competitors. Today, several similar events are held in other countries, including the L’Eroica Britannia in Derbyshire.


From now on it was a case of rain hard, ride hard with a couple of welcome stops to refuel courtesy of the ever-smiling Amanda and Martyn. We had one more lung bursting climb followed by what, for me, was one of the best ever descents. Long, with sweeping curves on a generally excellent road surface. How I wished it was dry - I could have easily touched 60mph - I could only manage 52mph. Well there's a good excuse to return and try again. 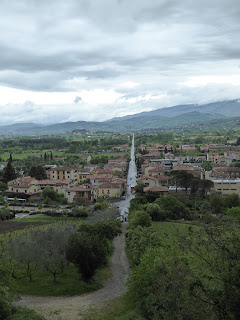 The last leg was a generally flat and fast ride in to Arezzo on a fairly busy main road. After negotiating Arezzo's version of gridlock we were soon at our hotel for the night, bags waiting in our rooms and with a hot shower beckoning. 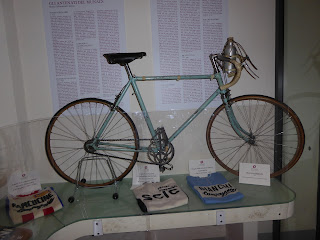 Our relatively early arrival meant there was time to have a look around Arezzo, a city which is as old as Alexandria in Egypt. For me, much of today was a celebration of cycling's heritage - Bartali, the Giro, and L'Eroica. So it was rather fitting that in a small local history museum I stumbled across a temporary exhibition with some vintage bikes ridden in the Giro.

Posted by Captain Century at 16:23