“Bev and I are at the Crown if you are looking for food, drink and Bianchi talk.” Well that was an offer that I couldn’t refuse! Bev and Chris are two members of the BOCUK (Bianchi Owners Club UK) that I belong to. Until now we’ve only met virtually, through social media conversations. But already I feel that I know them quite well. So the chance to meet them for real was an added bonus.

This all came about because there was a BOCUK ride in East Kent the following day and I had decided that it would be better to stay over locally the night before rather than get up at stupid o’clock and thrash down the M11 and M2. A wise move as it turned out because the nearby M20 was closed after a lorry had somehow managed to demolish a footbridge over the motorway. Anyway, I can report that the food was good (I had some tasty ribs), the beer was great (a local brew) and the Bianchi talk was outstanding. And for those readers who don’t quite get the Bianchi thing we did talk about other stuff as well. 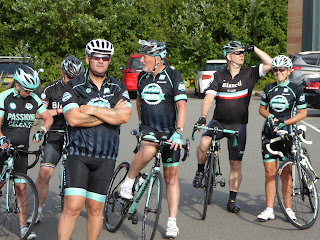 Fast forward a few hours. It’s 8:30 the following morning in the car park of the Premier Inn at Ramsgate. Now Premier Inn car parks look pretty much the same everywhere – especially earlyish on a Sunday morning. One word best describes them – grey. Well, here in Ramsgate something was happening. Rather like a chameleon, a transformation was taking place. Small isolated specks began to appear and coalesce into a rich sea of colour. And not just any colour but the richest colour of them all – celeste. By 9:00 two dozen of us were ready to set off on a route round East Kent. For me this was a first as, apart from passing through Dover, I haven’t been to the area before. So I was looking forward to enjoying some new countryside in great company.

Our route initially took us westwards along a cycle path parallel to the busy A299 before turning south through Minster and past the amusingly named Plucks Gutter. I almost felt at home here as the countryside was pretty flat with an almost fenland feel to it. We soon reached Wingham and turned east heading gradually towards the coast.  I spotted an apple orchard which I imagine along with hop fields is one of the county’s archetypal sights. Today was very much a social ride so there was lots of chatter amongst our small peloton. And as this was also a ‘no-drop’ ride we paused occasionally to allow everyone to regroup.

In no time at all we were into Sandwich and riding past the Royal Cinque Ports Golf Club. The direction of the wind meant that there was virtually no chance of any of us being hit by a wayward tee shot so that was a bit of a relief. (Note to readers: I used to be rather expert at wayward tee shots so I do know what I am talking about.) 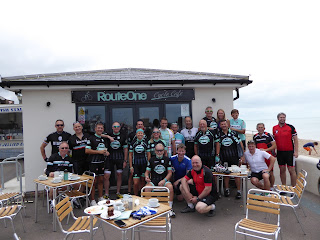 Leaving the golf course behind we arrived at Deal for what is always the high point of any ride – the café stop. The RouteOne Cycle Café was our choice of venue and truly excellent it was too. They had obviously gone to great lengths to make us feel welcome to the extent that their name boards were painted in celeste! Our impressive collection of Bianchi bikes leaning against the sea wall created a real stir of interest and admiration amongst the many passers-by. Most of us were able to pass this off quite nonchalantly, but I am certain that everyone got a buzz from the interest shown by our admirers; well the admirers of the bikes if not the riders. For the sake of completeness I should report that the coffee was excellent and the chocolate orange sponge cake was even better. I’m just relieved that cycling is a high calorie sport. …. 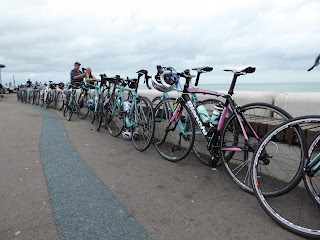 Resisting the temptation to linger and overstay our welcome we then retraced our route slightly to ride up the coast through Ramsgate, Broadstairs and Margate. Pedalling along the coast line gave the ride a completely new and delightful feeling. With some impressive chalk cliffs and a few ups and downs this really did round out the East Kent experience. The only downside was the volume of traffic. But you can’t have everything. From Margate we headed westwards to Westgate before turning inland to arrive back at our starting point – the Premier Inn car park. 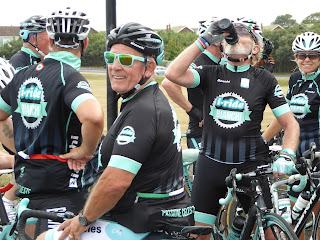 So how do you sum up a ride like this? Well, partly it’s the quality of the route and Ian T who planned it did us proud. Very proud. But for me, more than anything it’s the people I ride with. Once again with BOCUK I really did feel that I was riding with my extended family – people I’ve known for a while but never met and who in mere minutes forge a really strong bond.

Posted by Captain Century at 19:29