After the excitement of yesterday’s ferry ride I thought I would go on a rather more subdued ride today. But what to do? Where should I go? As I left home I still didn’t have any idea of where to go. Perhaps I should just ride around aimlessly until I had notched up the required miles. That did seem a bit pointless though. Then it struck me! I would ride the four counties route again (Suffolk, Norfolk, Cambridgeshire, Essex). (see C#2.) Only this time I would go the other way round. At this point I was slightly off piste but I quickly worked out a cunning plan to get me back onto the route.

So off I went making good progress and I was soon back on course. Although I had left home under heavy, lead-grey skies the sun soon broke through and the temperature began to rise sharply. This looked like being one hot day. The only downside was a very high wind which gusted quite strongly. Several times I had to grip the handlebars tightly to avoid being blown over by the crosswinds. The strong wind meant that as long as I was moving I did not notice the temperature. But as soon as I slowed it became apparent that it really was pretty hot. The other giveaway was that I was drinking a lot. So a stop to refill my bidons was going to be necessary.

Arriving at Clare in south Suffolk I called in to the local branch of the Co-op. Over the last few years the East of England Co-op seems to have re-invented itself and today provides all the essentials that the thirsty and hungry cyclist needs without too much razzmatazz. So I propped my bike up against the shop front and headed inside to get a bottle of water and a can of coke.  At the till I joined the queue behind a fellow cyclist and we acknowledged each other with a cherry hello and a smile. 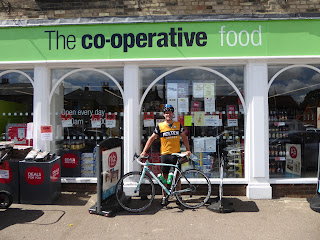 I emerged from the Co-op to discover said cyclist examining my Bianchi which he approved of and had spotted that it was equipped with Italian (Campagnolo) components. I then quickly discovered that my fellow cyclist shopper was riding with a friend and that they had come from Cambridge and were heading for Lavenham. I let slip, or even perhaps a minor boast, that I was on a mission to ride 60 centuries and that I was blogging the rides. So details of my blog were duly recorded on my fellow rider’s smart phone as we passed the time of day over cold drinks. My cyclist acquaintance also kindly took the photo of me posing outside the Co-op.

It was soon time to set off so we said our farewells and I was on my way. As I rode out of Clare I realised that I didn’t know my photographer’s name. But, if you do read this blog, then thanks for taking the pic and I hope you both enjoyed the rest of your ride as much as I did.

Musing on this brief encounter caused me to think what a nice lot we cyclists are. In my experience, cyclists are generally a very friendly bunch. And riding a bike is a great leveller. Most cyclists acknowledge each other with a friendly nod, wave or a hello as they pass each other. And the stories of riders stopping to help out those in trouble – a puncture or a mechanical – are legion. For me the social aspect of cycling is one of the greatest enjoyments. For sure there is a serious, competitive side. But time and time again, those I have met on the road, or ridden with at events, are the people who have really made the ride. And sometimes, through the shared experience and effort I have made some new friends on the road.

But there are risks as I have found out. Once while riding along I noticed a rider at the side of the road with his bike lying on the verge. I slowed and called out: “Do you need any help?” “No thanks” was the rather curt reply. At that point I realised the stop was natural not mechanical! Just as well I didn’t offer to lend him hand!!
Posted by Captain Century at 19:10