Wow, what a night! I’m referring to last night, the final night of track cycling at this year’s Olympic Games. Talk about edge of the seat viewing – quite literally in the case of Jason Kenny and the keirin final with two false starts and a finish that is best described as achieved with millimetre precision. With a total of 6 golds, 4 silvers and a bronze, the Manchester Medal Machine has certainly come good on the track this year. And of course not forgetting the Froomedog who won a bronze in the time trial last week. So it was with a feeling of great pride that I set out today to practice basking in the reflected glory of our cyclists.

With the prospect of a lovely sunny day, a ride to Orford on the coast seemed to be the perfect route for my basking exercises. And just to ring the changes I decided to ride it the reverse way round.

As I rode along I was thinking how much competitive cycling had changed since I first started riding seriously. Back in the late 1970’s I joined the British Cycling Federation so that I could obtain a racing licence. At that time, the BCF as it was known, was a fairly small organisation with very few full-time staff. Based in Leicester, it was largely run by people who had a reasonable knowledge of cycle racing and training techniques. To me it seemed that it was run in a typically British fashion – lots of enthusiasm and commitment, but always lacking a slight professional edge. Now, don’t get me wrong, I am not trying to be critical or judgemental. Instead I am telling it as I saw it.

Most of the people involved with the BCF had come up from the club scene where there was a strong tradition of amateur and semi-professional road racing and time trialling. There were very few riders who earnt their living wholly from racing. One or two managed to make the huge leap across to Europe in the hope of following in the footsteps of Tom Simpson and winning a place with a continental pro team. Robert Millar was the first person I remember achieving this. He went on to win the polka dot jersey in the 1984 Tour de France. A few others made the jump but for various reasons, and not always down to them, didn’t last. My recollection of our track racing achievements is virtually no-existent. Apart from the track at Leicester I think most racing was confined to outdoor concrete tracks like Herne Hill. On the continent there was a very high profile winter programme of now legendary six day races. Again, I can’t recall any British riders featuring prominently. (But I bet one of you knows different!)

With the benefit of lottery fuelled investment and a sea change in approach, British Cycling has transformed itself. The results speak for themselves. There is an attention (obsession) to detail that has become legendary. And in the best of British traditions the secret squirrel department of British Cycling, set up by Chris Boardman, has led the world in terms of technical innovation. Only in Britain could the national governing body for a major sport have a secret squirrel department! But all this has meant that the athletes, our riders, have been able to focus and develop their craft and realise their potential. To watch an elite British cyclist today is to watch an athlete at the very top of their game.

This cycling revolution has achieved a lot more besides boosting the performances of elite riders. Witness the hundreds and thousands of people who have been inspired to start or restart riding. Up and down the country, cycling clubs are reporting substantial increases in their members. It is not just for racing; for many it is the social enjoyment of riding with others that is the reward. And the growth of the sportive market has provided a new outlet for the non-competitive cyclist seeking a personal challenge.

Interestingly, as I passed through Framlingham this morning I noticed lots of other cyclists on the road. Enquiries revealed that the CTC (Cyclists Touring Club) were holding their annual week-long celebration of their founding (in 1878) based on Framlingham College. Now the CTC is another interesting organisation that is re-inventing itself. It has recently renamed itself as Cycling UK. This has certainly caused a few ripples amongst the membership, not all of whom have bought into the idea. Now the CTC, as I’ve always and will probably continue to know it, is a great organisation catering for a very different market to British Cycling. (Cycling UK / British Cycling – that’s going to confuse a few folk I suspect.) I’ve never been a member, though I do hold a Tour Leader’s Qualification from them. Most of the riders I passed, and there were a lot, seemed to be what are best described as senior citizens. And more power to their legs. I think it’s great that older people can get out and enjoy their riding, facilitated by the CTC. 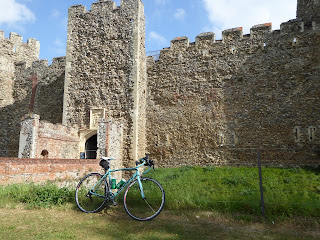 Well, enough of this pontification. What about today’s ride? As I’ve already mentioned I passed through Framlingham and made a small detour to look at the front of the castle. This is a rather spectacular place originally built by the Normans by 1148. It has passed through many ownerships, including Pembroke College, University of Cambridge from 1636 to 1913. Today it is owned by English Heritage who run it as a tourist attraction. 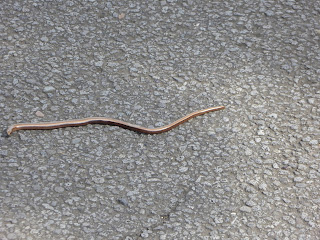 Soon after leaving Framlingham I spotted a slow worm basking on the tarmac. Unlike last week’s grass snake (C#30) this reptile, which is neither a worm or a snake but a lizard, responded to my exhortations and slithered off to the verge and the cover of long grass. So I was quite chuffed with my reptile count. 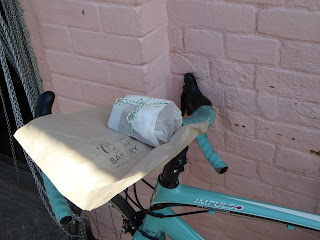 By now the sun was out and it was getting quite warm so I was glad to reach Orford for a brief stop to refuel. The Pump Street Bakery provided a very tasty egg sarnie and a caffeine boosting coffee. My bike had its usual donut. In fact, one of the ladies behind the counter asked me if the bike wanted a donut; I didn’t have to order it myself. Believe that if you will!

The rest of the ride was very enjoyable, I detoured from the ‘standard’ route to visit Gibraltar but was unable to find a sign to get a photo as proof of this. Then it was past the entrance to Helmingham Hall with its rather splendid gates before heading through Debenham and thence back home.

Like many cyclists I use a Garmin to record my rides and upload the data to Strava to see how I’ve done. Apart from getting kudos (sort of Facebook likes) from mates and unknown Eastern Europeans which is always good for the ego, Strava checks your times against your previous rides and those of other riders and awards you little gold, silver or bronze trophies where you have performed sufficiently well.  My count today was 43 trophies, including 13 Personal Bests. So as well as basking in the reflected glory of Team GB I think I might enjoy a little glory of my own!

Posted by Captain Century at 19:08