Today was a day to do something different – the Tour de Môn. In the mid 1970s I was a student at the then University College of North Wales, UCNW as it was generally known, in Bangor. Most of my time there was spent perfecting the art of being a student. And no, I’m not going to elaborate; you can use your imagination. Suffice to say that I didn’t do much riding during the three years I spent in Bangor. Most of my time, when I wasn’t ‘studenting’, was spent hill walking in the nearby mountains of Snowdonia. But what riding I did was great. North Wales is an excellent place for bike riding, even with the hills or perhaps especially because of the hills. So, for the last few years I've tried to fit in at least one ride in North Wales each year.

I’ve ridden a number of sportives here, all organised by Always Aim High Events, a local promoter. One of these which caught my eye a while ago is the Tour de Môn, or Tour of Anglesey. When I was a student, living on Anglesey was a mark of style. It didn’t matter if you actually lived in a hovel or a sheep shed, just living on ‘The Island’ was what counted. One of my friends lived in an abandoned windmill. I can remember going to a party there one weekend and then returning the following weekend because the party was still going. Wow! But that’s enough of these student antics.

For me, the notion of being able to ride all the way around an island is a great proposition. And, strictly speaking, the Tour de Môn involves going round two islands – Anglesey and Holy Island. So that’s two for the price of one. Excellent. 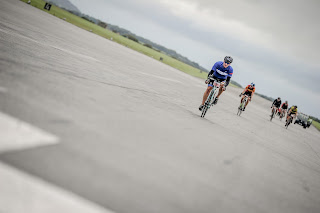 I set off at 7:00am from Holyhead and headed out past Holyhead Mountain – the route didn’t go up it as that would have needed a mountain bike. But I went over its shoulder and then after a few ups and downs was soon crossing over to Anglesey proper and heading towards its airport. Yes, there is an Anglesey Airport which boasts a tarmac runway, not just a grass strip. I think the airport is probably closed on Sunday's because the organisers had laid on a one mile sprint straight down the middle of the runway! Well, that could have been fun but riding into an exceptionally strong headwind rather took the edge off it as well as giving my legs a bit of a roasting.


Leaving the airport I then headed south west through Newborough with distant views across the Menai Straits towards Caernarfon. On a clear day, I would have been able to see the mountains of Snowdonia but today they were shrouded in dense low cloud. A sharp left turn had me riding parallel to the Straits and into, wait for it, Llanfairpwllgwyngyllgogerychwyrndrobwllllantysiliogogogoch. Try saying it! And if you want to know what the 58 letters translate to, well you can google it. Otherwise, just refer to it as Llanfair PG which is what most people do. 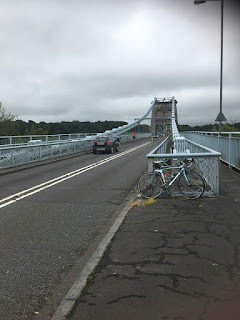 From Llanfair PG it was a short ride to Menai Bridge and a chance to ride across Brunel’s Suspension Bridge, round the roundabout on the mainland and back over it to Menai Bridge. The last time I rode over the bridge was in June 1978 soon after completing my finals. I also have fond memories of long evenings spent on the terrace of The Antelope, a rather fine pub which overlooks the bridge on the mainland side. When I was a student the suspension bridge was the only road onto Anglesey. Consequently, bank holiday weekends were plagued by legendary traffic jams. One incident, which made the national news, involved a replica AA sign placed at the A5/A55 road junction several miles away. The sign simply read “Anglesey Closed”. (I know nothing M’Lord!) Oh dear, these student insights do rather seem to be slipping out!


Leaving Menai Bridge I headed further along the Menai Straits to Beaumaris complete the first 50 miles. Then the tough riding began. I turned northwards, headed upwards into some lumpy countryside and also straight into a pretty fierce headwind. Gradually my heart rate increased, my breathing got more laboured and my legs started to ask some pretty serious questions about what I was doing and why. Happily the physical demands of riding were more than compensated for by the number of people out in the various villages I passed through, all shouting encouragement and ringing cowbells. One chap even had a vuvuzela - remember those?

Next stop was a detour inland to Parys Mountain which is basically a mountain that has been quarried away for copper ore. There’s some sort of heritage trail there now so I’m guessing that the copper mining has ceased. I clearly remember my last, and only visit to Parys Mountain. It was on a geology field trip in April 1976. I was there as part of one of my uni courses. Whilst our lecturer shared the intimate details of copper bearing geology a group of us spotted a burnt out car. Anyway, to cut a long story short, we lifted the car up, carried it to a pit, and tipped it over the edge to send it crashing down into the orange tinged lake about 100 feet below. As you can imagine it was a fairly noisy event. Incredibly, the lecturer appeared to keep up his discourse without interruption, acting as if nothing was happening. In my book, that takes a certain something. 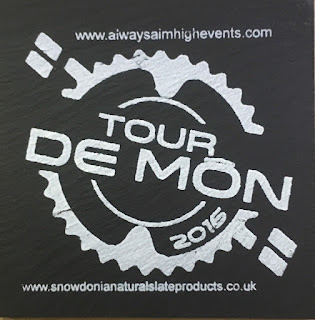 But enough of the student antics and on with the ride. From Parys Mountain I headed back towards the coast and into that wind which still hadn’t relented. Then it was a grind back to Valley before crossing over to Holy Island to retrace the route back to Holyhead and the finish. There was a great crowd at the finish, a mix of riders’  friends and relatives as well as a good number of other spectators. This time, instead of being given a finishers medal I received a rather fine engraved slate coaster. A nice touch to commemorate a great day in North Wales and the County of Anglesey.
Posted by Captain Century at 18:34