Have you ever meant to do something important and then completely forgotten about it? Well I had one of those moments today. As I was driving my car towards Colchester to start today’s ride I had a nagging feeling that there was something I had forgotten. I mentally revisited the kit I had packed to check I’d got everything. Riding solo without a pump is guaranteed to cause mayhem. So, Garmin (yes), phone (yes), camera (yes), route map (yes), tools (yes), spare inner tubes (yes), drinks (yes) and just to check you’re awake and reading this – pump (yes).  I didn’t bother to check off the bike as if I had actually forgotten it I wouldn’t be writing this blog and you'd be none the wiser, haha! So no luck. I knew it was something important but whatever ‘it’ was, was lurking on the edges of my consciousness, frustratingly just beyond my grasp.

Arriving in Colchester I got ready and double checked my kit – still all ‘yes’. But as I was none the wiser about what was troubling me I set off and made my way through the busy Colchester roads onto the B1025 heading for Mersea Island. The plan today was to ride round some of the Essex Creeks and Marshes, which is another if those rides in Chris Sidwells book.  One of the great things about riding in a new area is that there are usually plenty of surprises, and mostly quite nice ones too. 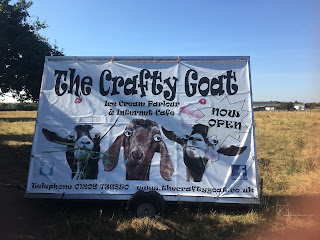 The first ‘surprise’ came after only a few miles near the village of Abberton. Riding along quite quickly I passed an intriguing banner so I stopped for a look. The Crafty Goat is an Ice Cream Parlour and Internet Café. Now the real reason for stopping apart from common curiosity is that my daughter Megan has a ‘thing’ for goats so I wanted to get a picture to amuse her. Unfortunately, as this was the start of the ride I felt it was too soon to sample their wares. But if I ever do this route again I might go the other way round so it’s near the end as I’m quite partial to an ice cream or three.

As I rode away I had one of those light bulb moments. What had been troubling me on the drive down suddenly became apparent. I was about to cross over The Strood, an 800-metre-long causeway that links Mersea Island with the mainland. Chris Sidwells notes on the route strongly advise riders to check the tide times before crossing over. Blast! As I approached I worked out that the tide was probably coming in but didn’t yet seem that high so I thought I could probably get to East Mersea and back before I got cut off. Ho hum; fools rush in where angels fear to tread and all that! 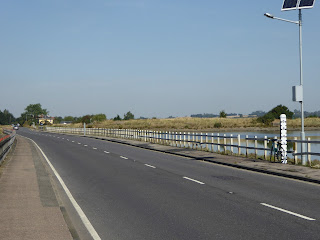 The lane to East Mersea gradually got narrower and narrower until I literally reached the end of the road – which I had expected. So I had to turn around and retrace my steps. Riding along the island was quite an interesting experience because there was definitely a different feeling to the place compared to mainland Essex. Not something I could put my finger on. Merely a slight sense in the airwaves.  I made it back to The Strood in good time to discover that my fears were groundless. There was no way today that the tide was going to cut me off. But the water depth markers show that at certain times there must be some pretty impressive high tides.

I then headed along the north side of the Blackwater estuary to Maldon. Coming into Maldon I encountered a short but rather steep hill to the start of the main shopping street. From there it was downhill and east towards Bradwell on Sea which is a very pretty small village close to the imposing, now pretty well decommissioned nuclear power station. From there I turned back to ride across the Dengie peninsula. That’s a name I love – it has a really earthy sound to it. Try saying it. Go on, you know you want to! Throughout the ride I could see the coast across the marshes and creeks but very rarely got close to it. And there was the familiar tinge of ozone in the air to remind me that I was near the sea.

After a quick pause to top up my water bottles at Burnham-on-Crouch I continued westwards to South Woodham Ferrers. Although I was on a B road it was pretty busy so the riding was not particularly enjoyable. I then headed roughly northwards along more busy B roads to Danbury which was nicely wooded with some small hills which broke up the monotony of flat riding. 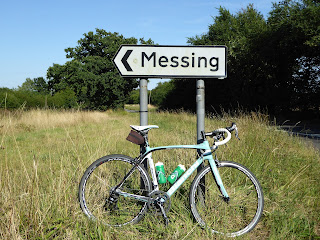 From Danbury I headed to Tiptree which I had been looking forward to.  Unfortunately, it didn’t really live up to my expectations. I have long enjoyed those tasty jams and marmalades that Wilkin and Sons make.  For as long as I can remember I have been aware of their distinctive black and white bottle labels which, en-masse, make for an interesting display. And as I child, I always associated their small, single serving jars with a special treat. I can still remember having afternoon tea with my Mum and Dad on the Brighton Belle train. Ooooh what a delight that was. So I was perhaps expecting too much as the part of Tiptree I saw was pretty uninspiring. But I will concede that I must have ridden past the heart of the village so I’m going to put it in the fridge so to speak and come back for another taste. From Tiptree it was a pretty uneventful ride back to Colchester. On the way I passed a sign to Messing which made me smile. We do seem to have a way with place names.

All in all, this was quite an enjoyable century ride, if perhaps a slightly underwhelming one. I had been expecting (hoping) for rather more atmosphere as I rode around – perhaps similar to that created by the late author P D James in her series of novels featuring the detective Adam Dalgliesh, many of which were set on the remote and exposed coast of East Anglia. And the volume of traffic on the roads meant that I had to concentrate quite hard with less time to look around at the sights I passed.
Posted by Captain Century at 20:12