I have a large scale map of East Anglia which I sometimes use to help plan my routes. I also mark it up to show the roads that I have ridden on. This helps to identify areas and roads that I haven’t ridden on. Not that I’m on a quest to ‘collect’ all of East Anglia’s roads. But then again ………. Looking at the map I realised that there was a corner of Suffolk that I have never visited, by bike or any other means. So as the weather forecast was promising I thought I would head out and investigate. The bit of land in question is the Shotley peninsula which sites between the Orwell and Stour estuaries with the ports of Felixstowe and Harwich on either side. I’d also been told that it was quiet an attractive part of the county.

So on a crisp, chilly morning with the prospect of some autumn sun I rolled the Impulso out of the garage and prepared for the le grand depart. I should mention that the Infinito is with Dr Mick getting a new headset and the Oltre is showing early signs of winter hibernation. So there was backchat to contend with.

As I rode south east towards Ipswich I could see the Mendlesham Transmitter Mast looming large. This sits alongside the A140 near the village of Mendlesham. Well it’s not going to be anywhere else is it? That would be plain stupid! The mast is visible from quite some distance, especially at night when its red lights are on – I can see it from Stanton where I live, which is about 12 miles away as the crow flies. The mast was originally built for the ITV network but now supports a range of other services including DAB radio. When it was built in 1959 it was the tallest structure in Europe at 305 metres (1,000 ft.). It lost that distinction to another mast, ironically one of its own relay’s, in 1965. I’ve quoted these ‘facts’ from a website that seems to be dedicated to radio masts (yawn). So readers, before you start bombarding me with messages to say I’m wrong let me come out and admit t! My own research tells me that the Eiffel Tower, completed in 1889, is 324 metres (1,063 ft) tall and held the world record until the Chrysler Building in New York was completed in 1930. Anoraks out there will of course point out that with the addition of a radio mast in 1957 the Eiffel Tower leapfrogged the Chrysler Building by 5.2 metres (17 ft). But whatever. No one can disagree that the Mendlesham Mast and the Eiffel Tower are big; very big!

Anyway, on with the ride which next took me through Ipswich. I’ve been there many times by car and train but have never ridden through the town and today I was going to go right across it. Fortunately, the chosen route seemed to approach Ipswich by the back door, so to speak and before I could say “chainring” I was riding past the train station and rapidly approaching the quayside at the head of the Orwell Estuary. A very painless and traffic free experience.

Now talking of big structures I soon arrived at the Orwell Bridge. This is an impressive feat of engineering. The Bridge was opened in 1982 and has a main of 190 metres which, at the time of its construction, was the longest pre-stressed concrete span in use. The total length is 1,287 metres, with a width of 24 metres and an air draft of 43 metres. Pilings were sunk 40 metres into the river bottom. So by any stretch of the imagination it is big. The design capacity of the bridge is over 70,00 vehicles per day and I have read that this was exceeded in 2015. When it’s closed, either due to high winds or accidents, many of Ipswich's roads are brought to a near-standstill.  And do you know what? Now I’ve ridden under it I quite fancy riding over it. I wonder if that’s possible – perhaps on Christmas Day? Mmmm.

Leaving the Orwell Bridge behind I passed the Suffolk Food Barn which my eldest daughter tells me has a good café. It was bit early in the ride for a stop (maybe if I do the ride in reverse sometime) but it looked fairly popular as the car park was nearly full at 11:00 on a Sunday morning. As I rode along the road I kept getting glimpses through the trees of the River Orwell which was chock full of boats of all types – dinghies, sailing yachts and cruisers. All too soon I arrived at Shotley and turned the corner to Shotley Gate with a view across the estuary to the Port of Felixstowe. Now this is a massive operation. Nick and Michael, who I sometimes ride with, work there. I’m not totally sure what they actually do (Nick’s and engineer and Michael’s a manager) but I do know that it involves cranes and boy, there are a lot of very big cranes there. And I’ve read somewhere that Felixstowe is the world’s biggest exporter of empty cardboard boxes – more than one million tonnes in 2013. Wow. 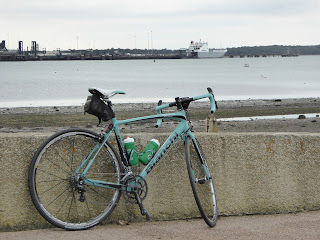 After gazing at Felixstowe, I retraced my steps or, more correctly my tyre tracks to the other end of Shotley Gate where I could see across the Stour Estuary to Harwich. This is the destination port for ferries sailing to the Hook of Holland. In addition to people, Harwich also receives tankers and other general cargo. The port also had a shot in the arm as the support base for several off shore wind farms whilst they were under construction.

From Shotley I headed back inland parallel to the Stour Estuary. Although not that isolated geographically I had a strong sense of riding in some quite remote and isolated countryside. The quite narrow lanes and gently undulating land made for quite a lonely feeling. That soon passed though as I emerged at Holbrook, which is noted for the Royal Hospital School I rode past the front of the school and made a mental note to return as the buildings were very striking and I’m guessing that there’s a huge amount of history that I could blog about. So, until the next time.

The final part of the ride took me through the edge of Dedham Vale which was looking magnificent as the hedgerows are starting to put on an impressive display of autumn colour. I do hope that the frosts and winds hold off awhile so I can enjoy my favourite season to the full. Heading towards Hadleigh I had a ‘Garmin moment’ when said device decided to stop providing me with turn by turn directions. When I eventually realised I discovered that I had strayed off my intended route. Infuriatingly, the Garmin was showing the correct route on the map screen and even more infuriatingly was telling me that I now had 223 miles to ride to my destination. And, the further I rode the greater the distance got. So I gave up using the Garmin for navigation and followed my own compass. And I have to tell you that (a) I didn’t get lost; (b) didn’t add any extra miles; and (c) had a cracking ride to the finish. So there!

Posted by Captain Century at 18:10