Today was going to be the first day in the Hautes Pyrenees, what this tour is really all about. We slipped out of Jaca into a lovely early morning misty vista. By my reckoning today was going to be a superb one weather wise. The omens were good and I was sure that as the sun burned off the mist we were going to enjoy clear, blue skies and warming temperatures. Within a couple of miles we were onto the first climb of the day, reasonably short and sharp – just the sort of climb to warm my legs as a prelude to the main event of the day.

Once again, the countryside did not disappoint – we were riding through some lovely pine forests and the air was rich with the smell of resin. Although the roads were a bit rougher than we had become accustomed to they were relatively traffic free and so very enjoyable. Our ride was broken up with several photostops. There were so many opportunities that I began to wonder if we would actually reach our destination before sunset. Every corner we rounded seemed to throw up an even more spectacular vista. And in the background the high mountains were gradually growing closer and closer. Reaching the first feed station at 25 miles gave us a chance to pause and draw breath – not from the efforts of riding; more from an overindulgence of soaking up the scenery. 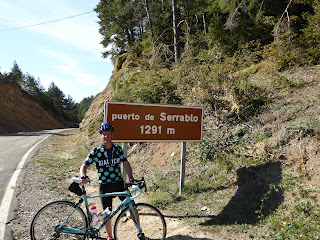 Suitably refreshed we set off again for the main event of the day, the ascent of the Puerto del Sarrablo. Over the next 22 miles this rose nearly 2,000 feet at an average gradient of 1.6%. The lower sections seemed almost flat but as we climbed higher and higher a few steeper sections reared up to test our legs. Reaching the top of the climb took me around 2 hours – and I rode it without stopping. (I’ve made a video of the ascent which I hope to post when I’m back home.) At the summit we paused to regroup and enjoy the most spectacular view so far. The view was enriched by the sight of a pair of Griffon Vultures circling effortlessly overhead. For me this was easily the high point of the Tour so far and I’m struggling to find the words to express my feelings. So you’ll just have to accept that it was beyond description!

Unfortunately we had to move on. If I thought the ascent was spectacular then the descent was possibly even more spectacular. For once I was able to shed my inhibitions and really enjoy the descent at speed. With an average gradient of about 8% and dozens of open sweeping curves I was able to wind it up and simply fly along – I’ve video'd the descent too so hopefully I've captured a sense of exhilaration that I felt.

Martyn and Amanda were waiting at the bottom of the descent with our lunch. By now the temperature was rising steadily so we were glad of the refreshment (that cool melon was yummy!). But we had to press on over the final 20 miles to Campo, our overnight destination. This final leg was hard; very hard. In temperatures that rose to 30 degrees, with absolutely no shade, the final 9%, two-mile climb of Foradada was quite a challenge. The longish straights added to the pressure and I could see the air shimmering ahead of me. This was very much a case of turning the cranks one revolution at a time and grinding it out! 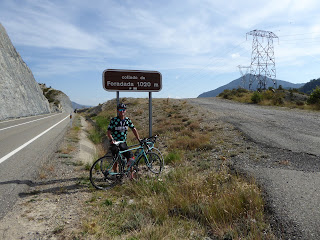 Eventually we reached the summit and then it was a very fast descent to Campo. I managed to touch nearly 50 mph before reaching the bottom – and I wasn’t the fastest by a long way! At last we reached Campo, a small, sleepy hamlet surrounded by the mountains in every direction. All that was needed now was a cooling glass of beer and I wasn’t disappointed!

Posted by Captain Century at 16:50

Email ThisBlogThis!Share to TwitterShare to FacebookShare to Pinterest
Labels: Tour of the Pyrenees 2016