Under rather grey skies and a cool temperature we gathered outside our overnight base in Pamplona to prepare for today’s stage. The route promised a steady ride with "no significant hills" (in the words of tour organiser Martyn) so it was a sort of transitional stage. We managed to find our way out of Pamplona without too much difficulty and were soon into open countryside. Ahead of us in the distance were the Hautes Pyrenees, which we will be riding in tomorrow.


The Elites were in good spirits and together we made excellent progress on some superb smooth road surfaces. I dropped off the back of the group at one point to take a photo and then indulged in a spot of time trailing to get back on.  It was pure bliss to spin along almost effortlessly at around 25-30mph for a couple of miles with the aid of a tailwind and the sound of my tyres swishing on the smooth surface. It made me realise how crappy the roads are back home. After catching up with the rest of the Elites we rode together to the first feed stop at around 25 miles. With a mug of coffee and a banana inside me I was fully recharged and ready for the second leg.

After about 30 miles we arrived at the only real climb of the day – in two parts at around 9%. We were riding on what was the former main road; a new dual carriageway had been built alongside us which carried most of the traffic. The surface of the ‘old’ road however was better than most of the equivalent minor A or B roads in England. 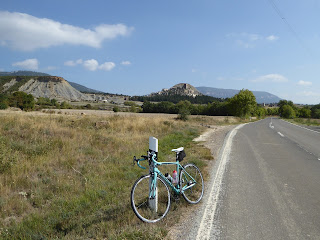 Getting over the climbs we then rode alongside a reservoir, the Embalse de Yesa, which was almost empty of water. Around us were spectacular limestone hills with some impressive cliffs. This was certainly very dramatic countryside. And the high Pyrenees dominated the background – a reminder of things to come over the next few days. This was the sort of country that I have seen before in spaghetti westerns. I could almost imagine Clint Eastwood, some Mexican bandits, a mule and maybe even a nun emerging from one of the many canyons we passed.


After topping up at the second feed station we then had a long and quite testing ride for the final 25 miles – all uphill at an average of 1-2% with a few slightly steeper sections. With a headwind and rising temperatures this was quite hard work. We shared the leading and so maintained a reasonable average speed. Arriving at Jaca we stopped for a cooling ice cream an McDonald’s – not quite PC for ‘elite’ cyclists, welcome nevertheless. Jaca sits in the shadow of some impressive mountains which I am sure we are going to get to know – intimately.

Posted by Captain Century at 15:56

Email ThisBlogThis!Share to TwitterShare to FacebookShare to Pinterest
Labels: Tour of the Pyrenees 2016