Since embarking on this 60 Centuries project I’ve written a few times about the Bianchi family and the special relationship we share with our bikes. So far I’ve met quite a lot of Bianchi cousins and even a few who could be long lost brothers and sisters. We mostly all share some celeste DNA, though, in the interests of diversity, some of our cousins have a preference for other colours. What unites us is the love; no the passion, for Edoardo Bianchi’s legacy which we guard jealously, value greatly and celebrate joyfully.

Well, today was a chance to meet some new relatives, a couple of uncles and an aunt. Now you may be thinking that I’m losing the plot and getting a bit carried away with myself here. But let me reassure you that I am still firmly grounded in reality. I think! On my list of potential century rides was one based mostly in Bedfordshire. A little while ago I discovered that Bianchi’s operation in the UK is based in Bedford which set a train of thought in motion. How about starting and finishing from their offices?

So at the Cycle Show in Birmingham a few weeks ago I called in at the Bianchi stand and met Aunt Lucia. We had met briefly before and she also played a vital role in getting me back on the road when my Nirone frame needed to be replaced just a couple of weeks before last year’s Lejog. Lucia introduced me to Uncle Andrew and I made my pitch. Andrew couldn’t have been nicer and asked me to get in touch with him by email to set something up. I also mentioned that I was planning to write a piece about the history and culture of Bianchi and he said he knew of another uncle, who was also a colleague, who would be able to look over my draft. And guess what? Uncle Pasq’s surname is Bianchi! How surreal. 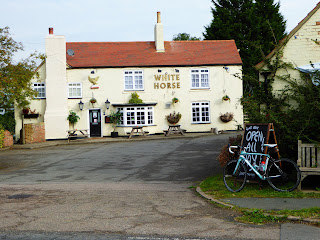 So today I headed over to Bedford and made my way to their offices. After some quick hello’s and bit of discussion about my intended route we gathered outside the office so Pasq could take a few photos to commemorate the occasion. With darkening skies, I was keen to make a quick start and we agreed to save the chat for my return. Getting through Bedford was very easy with the aid of some excellent cycle paths. Then it was north to Kimbolton before turning towards Rushden. Along the way I paused at Tillbrook to snatch a photo of The White Horse. I’ll be back here in a few weeks for lunch. It’s about halfway between where my sister and I each live and we meet here from time to time for a goss. If you like a good Sunday roast this is a great place to indulge. Although I was tempted to cross The White Horse’s threshold it was much too early in the ride to justify so, with slight reluctance I got going again.

Most of the ride now was through a succession of gentle ups and downs. None too steep or long but enough to give me a reasonable workout. This time last week I remembered that I was riding under blue skies with temperatures in the mid-20’s and climbing El Canto. What a difference a week makes. Today was much cooler at around 10°C, with a strengthening wind and some heavy showers in the distance. With an amazing stroke of good luck I managed to dodge all the showers.

Arriving at Ampthill I headed eastwards and although I was still on relatively minor roads, there was a noticeable increase in the volume of traffic, much of it due to the afternoon school run. One of my hopes for the ride had been to buy a Bedfordshire Clanger. This is a traditional dumpling, similar to a pasty, but shaped like a sausage roll with a savoury filling at one end and a sweet one at the other. Originally, Clangers were made with a suet crust but nowadays apparently a short pastry is used instead. It was very much a staple in the diet of 19th Century agricultural workers. Riding along the High Street at Meppershall I spied a traditional bakery so I thought my luck would be in. Entering the premises, the person behind the counter gave me a big smile. I bet she was thinking – hungry cyclist = big spend. So I popped the question: “Do you sell Bedfordshire Clangers?” “No” came the terse reply, accompanied by a scowl. “Oh, that’s a shame, any suggestions where I might get one?” “Not really, you could try in Bedford.” “Well, thank you very much.” And our little exchange ended with said bakery person wishing me “the best of British” in the most insincere tone I think it was possible to muster! So, no Bedfordshire Clanger for me. Not today at least.

Leaving the bakery and the baker behind me I headed on through Biggleswade (where I have since learnt I could indeed have bought a Clanger, not dropped one) and St Neots then I was soon heading back to Bedford and Bianchi HQ where my uncles and aunt were awaiting my arrival. After six plus hours in the cold, with a cold and riding into what felt like a headwind all the way meant that I was a tad locked up. A quick wash, a change of clothes and a with a warming coffee I began to feel half-human again. So it was with more than a little enthusiasm that I was ready to learn more about the family.

In a very short time, I learnt a lot from Pasq about Bianchi’s history. I’m keeping this under wraps for now as I want to write a ‘special’ on Bianchi’s history and development. Pasq has kindly agreed to give my efforts the once over – something I hope he doesn’t regret as, based on our brief discussion, I fear I could be a long way off the back of the peloton. Both Lucia and Pasq have long associations with Bedford so were quite amused by my Bedfordshire Clanger experience and had a lively discussion amongst themselves about where I could buy one. They also told me about another local delicacy – Chocolate Toothpaste. And readers, Google it if you want to know more. I fear that I will have to do a fast hundred here just to burn of the culinary calories on offer.

Andrew spent some time telling me about Bianchi’s operation in the UK. I learnt that they sell around 4,000 (road) bikes a year. That there are 90 dealers across the UK (chains like Evans are considered to be one dealership). The average Bianchi buyer is aged between 40 and 50; 35% are women. Although the facts and numbers are important; this is a business after all, what we spent most time talking about was Bianchi the Brand. I have often said that Bianchi owners share a language, much of which is not spoken but only felt and absorbed. Listening to Andrew was like having unique access to the Bianchi dictionary. At its simplest level, I can use words like reputation, longevity, affinity, passion, lifestyle as examples to articulate what the brand means. But there is always something else that you know is out there, just beyond reach, that is the unique ingredient in Bianchi DNA. It is something that many other bike manufactures strive to attain but, in my view, never quite manage. And it is the reason why true Bianchista’s get such a thrill from their bikes. At a few points during our conversation I really did feel that ‘Uncle’ Andrew had taken me through a door to another world.

But all good things come to an end and I was stunned to see that we had been chatting away for over an hour. At the end of a working day Andrew had been incredibly generous with his time. And to make the day even more special the Andrew presented me with a superb espresso cup and saucer as a memento of my ride. Grazie mille Andrew, Lucia and Pasq. Passione celeste!