The explosion in the popularity of cycling in Britain has over recent years seen a huge growth in the number of sportives that are organised round the country. Sportives aren’t races in the conventional sense; they are more a personal challenge against the clock. Riders often aim to achieve their best time for a given distance or achieve a new personal best distance. And many riders just want to have an enjoyable day out. A typical sportive provides three riding options – a short (30-40 miles) route, an intermediate route (60-75 miles) and a long route (100 miles +). 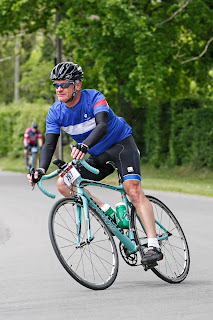 Sportives are very popular with charities as they provide an excellent opportunity for fundraising. Indeed, several charities organise events to support their own fundraising strategies. Other events are organised by cycling cubs or companies who run them as a business. Sportives can cater for just a few hundred riders or several thousand. They are normally run on open roads i.e. cars and pedestrians are around so the rules of the Highway Code (should) apply.

Although a sportive isn’t a race, that doesn’t mean that there aren’t any wannabe Bradley Wiggins or Chris Froome types taking part. Quite the opposite. And some folk post very fast times. I always enjoy looking at other peoples’ kit – from the latest high tech bike to the full-on replica team kit. And there doesn’t seem to be any relationship between the speed and ability of riders and the quality and value of their kit. Quite the opposite – it’s not uncommon for me to spot someone riding a state of the art full carbon frame bike with electronic gears and disc brakes, wearing a top continental trade team’s full kit and pedalling along at a steady pace. Whatever makes you happy! 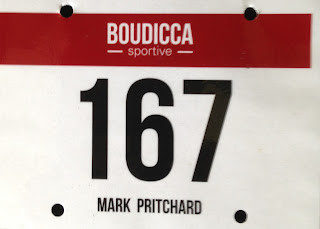 Today I rode the Boudicca Sportive which is a fairly small local event organised by a couple of folk and their company, Push Sport. The entry field is restricted to 600 for the three routes. This is the fourth year I’ve ridden it and I always enjoy it, which is why I keep coming back. The ambience is always friendly. Yes, there can be a competitive edge amongst some riders but the majority seem to be there to enjoy a great day out riding with friends old and new. And today’s ride was certainly no exception – a great route, well waymarked and three excellent feed stations (mmm – those fig rolls). Kind weather was a bonus too. So I say “chapeau” to Sara and Tim who work incredibly hard behind the scenes to make it all possible for riders like me to enjoy ourselves. And that's one quarter of my 60 centuries goal in the bag.

Boudicca was Queen of the Iceni, an East Anglian tribe in Roman times. In about AD60 Boudicca led a revolt against the Romans and destroyed Colchester. She then went on to attach London and St Albans, both important Roman locations. It is estimated that 70-80,000 Roman soldiers were killed by Boudicca's warriors in the three cities. This made Nero, the Roman Emperor consider withdrawing all his Roman forces from Britain. However, the Roman forces regrouped and eventually defeated Boudicca at the Battle of Watling Street.

And a little postscript. As someone who’s an experienced century rider and trying to complete 60 this year I was reminded how significant a milestone riding this distance is. As I was waiting to get a recovery drink at the finish I got chatting to the rider next to me. It transpired that this was the first 100 ride he had done and he was euphoric about it. So “chapeau” to my fellow rider – I hope this is the first of many you enjoy. See you next year?
Posted by Captain Century at 18:44