Having skirted round the edge of the Fens on a few occasions I thought I would take the plunge and go over there for a proper ride. It is a bit if a challenge though. Avoiding major trunk roads means that if I start from home I have to ride about 30 miles to get to the area (and 30 miles back). So that leaves about 40 miles to explore. Then, the road network in the Fens brings its own restrictions, particularly in terms of opportunities for crossing the various rivers and drainage dykes. I find the best way to plan a route is to find somewhere that looks interesting and work out a route there and back, ideally without returning on the same roads. My route planning tool of choice is a bit of software called Ride with GPS which is both simple to use and quite clever as you only have to click on odd points on the roads of choice and it does the rest by joining up the click points, working out the distances and height changes etc. I do need to be a tad careful as sometimes the software misinterprets my intentions and tries to go to places best avoided. This is usually because I’ve tried to cut corners marked too few click points. And editing a route doesn’t seem to be quite so simple, but that’s probably down to me.

So today’s point of interest was Denver, just outside Downham Market in south west Norfolk. The route seemed to offer a really good fenland riding experience – long straight roads across flat plains at sea level. And also the prospect of riding alongside one of the major rivers in the Fens, the Great Ouse, on what looked to be a really quiet minor road. Thereafter my chosen route took me back through an area of south Norfolk I have rarely ridden in and then back onto more familiar territory. 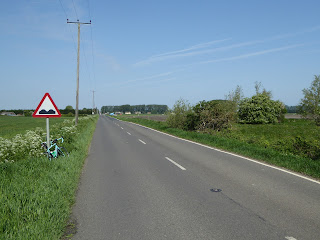 Arriving at the Fenland frontier I was greeted by the first landmark feature – a road which disappeared into the distance. A look at the map later on showed that it went arrow straight for 3.7 miles, starting at 10 feet above sea level and finishing exactly at sea level. Conditions were ideal: no wind, clear blue skies and cool temperatures. Riding this on a windy or hot day would be a real test. As I rode along a few things struck me. The scale of the landscape is immense and almost impossible to describe. I could literally see for miles and miles in every direction. The road ran along an embankment a few feet above the surrounding fields which added t the views. This is intensive farming country with a wide range of crops such as wheat, rape, peas, leeks and onions being grown. The rich, black soil points to the fertility of the area.

I noticed quite a few fields had machines, shelters and portable floodlights that were obviously there to support the crop harvesting work. What did surprise me was how shabby the various farmyards etc. were. Many were derelict and full of abandoned machines and scrap metal. And I saw quite a few houses that were little more than shells. So I guess it’s all about money here – if it doesn’t pay, it doesn’t stay. 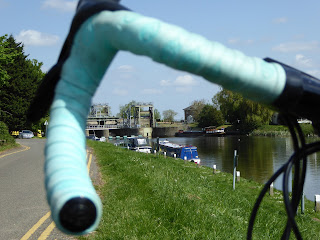 After a quick spurt up the main A10 road I reached Ten Mile Bank and then had a delightful ride along the side of the River Great Ouse until I reached Denver Sluice where I was able to cross back over the river. Getting across waterways in the Fens is not always as straightforward as you might hope. Denver is a fairly nondescript place with a rowing club, a sailing club and a golf club. The only notable feature that I could see was that it was the birthplace (1756) of Captain George Manby who, amongst other things, invented the first proper fire extinguisher. There’s a blue plaque on the outside of the house he was born in. I had hoped to get a photo of the village sign so that I could show I’d been to Denver. But I couldn’t find one. (I’ve subsequently worked out where I need to go so look out for an update in due course.) And if like me, you’re wondering if the ‘other’ Denver is named after this place I can tell you that it’s not. Denver, Colorado is named after a 19th century American politician.

Well it’s Friday the 13th of May which seemed like a good day to do my 13th century. After the sunshine and heat of Monday, today was a lot cooler, with little sun but unfortunately quite a strong, chilly north wind. The weather people are talking about a cold front coming from the north and making it sound like winter's on its way back. I hope this is just a blip because the sunshine of the last few days has meant that I’ve been able to wear a short sleeve jersey and bib shorts. So my cyclists tan lines have been coming on a treat,

I decided to head east towards the Waveney valley and Bungay, a route that I hoped would minimise the effect of the wind. Experienced cyclists will tell you that on windy days you should always ride with fresh legs into the wind first and return home with tired legs and a tailwind. Well that’s the theory but in my experience I seem to have an uncanny knack of riding in cyclone – headwind out, headwind home. I try to rationalise this as akin to riding in the hills. 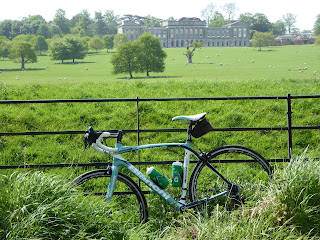 The first 30 miles or so were very enjoyable and I reached and passed through Stradbroke in good time. Then it was on to Halesworth passing by Heveningham Hall on the way. Heveningham Hall is a rather fine pile set in some fantastic countryside and I’ve made a mental note to return and look around a bit more. Leaving Halesworth I turned north and more or less directly into a fairly strong headwind. So that rather changed the riding experience. The next few miles are in an area that I’ve heard described as “High Suffolk”. As someone who’s lived in Snowdonia and the North Pennines, I do find the notion of “High Suffolk” quite hard to take on board. The highest point I’ve been able to find is a mere 175 feet above sea level. No matter, it’s an attractive area and I kept telling myself that I was being virtuous riding in the ‘windy hills’. 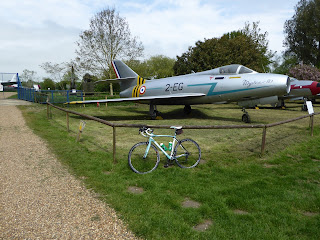 My goal was to get to the Norfolk and Suffolk Aviation Museum at Flixton where I’d heard there was a café. I thought this would be a chance to rest my legs at about the halfway point and maybe even enjoy a nice cake or a flapjack. Pulling in to the entrance of the museum I thought it was rather quite for midday. It soon became apparent why – during the summer the place isn’t open on Friday’s or Saturdays! I’m guessing that this is related to the availability of volunteers to run the museum. And in the interests of ‘balanced reporting’ I should tell you that admission to the museum is free. But nevertheless, being shut on Fridays and Saturdays. Hmmm.

From Bungay I gradually turned to a more westerly direction and for once that Suffolk cyclone didn’t work against me. I actually had the benefit of a tailwind for the much of the last 20 miles so I was able to crank up the pedalling rate up and make good progress. So on Friday 13th May my 13th century was in the bag, and apart from the closed café, without incident. Not that I’m superstitious.

Posted by Captain Century at 17:25