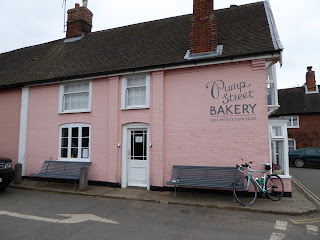 One of my favourite rides is to the Suffolk coast at Orford. And the best bit is stopping for a coffee and doughnut at the Pump Street Bakery. The doughnuts are world famous having been mentioned at the 2015 Oscars. In case you're wondering what I am on about, here’s the story.

Mat Kirkby, a local film director, won an Oscar for the best live action short for The Phone Call, starring Sally Hawkins and Jim Broadbent. He’s a regular at the bakery’s café and the doughnuts are a particular favourite. Rumour has it that Mat actually wrote some of the film script while visiting the bakery. The owner, Joanna Brennan promised Mat a free doughnut if he won an Oscar. So in his acceptance speech Mat credited the bakery as one of his inspirations. And the media ran away with the story, giving the bakery world-wide fame. 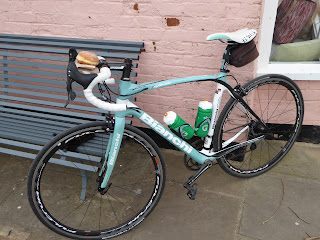 The doughnuts are freshly baked each day and are available with a choice of either rhubarb or raspberry jam. And very good they are too! So good that I usually buy two - one for me and one for my bike of course!


Anyway, that’s enough about doughnuts. And I’ll blog a bit more about Orford the next time I ride over there.

Saved by a leap year! Like all the best laid plans mine nearly came to an early end. My goal at this stage was to ride one century each month of the year. For one reason or another, coupled with some pretty unpleasant February weather I hadn’t managed to ride a century this month. But the 29th of February was a lovely sunny, if rather cold day so I was on the bike as soon as the morning frost had thawed.

My original plan was to ride one of my ‘standard’ routes at around 80 miles and then chuck in a loop at the end to take the mileage over the 100 mark. So I set off heading south west towards Lavenham and then on to Long Melford. Leaving Long Melford for Clare I noticed an Essex county threshold sign which got me thinking. I stopped to take a photo and wondered: how about riding the four counties of East Anglia? My standard route would certainly take me through Essex and into Cambridgeshire and I had already been riding in Suffolk. So that just left Norfolk. The other question was could I get a photo at each county boundary? 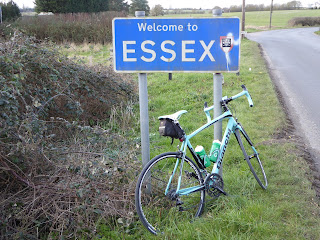 So that became the goal.  Within a few miles I was out of Essex and back in Suffolk and then as I was heading towards Newmarket up popped a Cambridgeshire sign. Three out of four counties and I was only about a third of the way round. Result! Approaching Newmarket I turned north into a landscape that defines this part of East Anglia. This is horse racing country and the landscape oozes intensive management and money. Stables and stud farms abound with their network of rich grassy paddocks and double fenced fields. This relatively small corner of the region is quite unlike anywhere else. 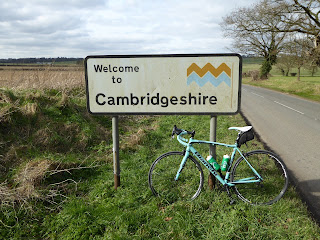 As I left horse country behind me I eventually dropped down to sea level onto the Fens. This part of the region is totally dominated, for now at least, by the US Air Force with the large bases of Mildenhall and Lakenheath. It’s almost like being in little America – three quarters of the cars are American models. As road users I can report that they are no more or less sympathetic to cyclists than British drivers. Arguably, with left-hand drive cars approaching from behind give you marginally more space. But they don’t trend to slow down and wait for a gap in the oncoming traffic. 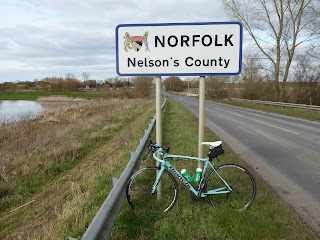 Reaching the River Little Ouse I crossed my final frontier at the RSPB Lakenheath Fen Nature Reserve. Something was going on there because there seemed to be quite a few twitchers all looking intently through their binoculars at something. Nobody was near me so I couldn’t find out any more. 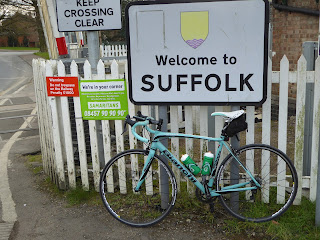 I eventually doubled back through Brandon where I crossed back into Suffolk – and got the final photo to complete the set. Then it was a steady 20 miles or so back home. So, what started out as one ride turned into something rather different. That readers, is one of the joys of cycling!

Well I rode my first century of 2016 today. 102 miles from home through Thetford Forest from south to north and then back home on more local roads with a few diversions to make sure that I crossed the 100‑mile threshold. Much of the route was on a fairly regular circuit for me so I decided to break some ‘new’ ground and ride through Brandon to Mundford; normally I ride round the edge of Brandon and through Santon Downham where I used to work in the early 1990’s.

The ‘new’ part of the route offered me a few distant glimpses of the Fens which at this time of year are a pretty bleak place. I found myself thinking of Mordor, from Tolkien’s Lord of the Rings. If the Fens in January are Mordor then the rest of the ride was very much a tour of the Shire, albeit a Shire in full winter hibernation. Today was also the first reasonably sunny day of the year, made slightly less cold by a south west wind.

This is a ride of many contrasts – mature forests, fens, heaths, farmland bearing the scars of the sugar beet harvest and supporting the seemingly exploding pig rearing industry. Although this wasn’t a ‘bad’ day, winter unless it's bright sunshine with crisp air is definitely not my favourite season.

Posted by Captain Century at 19:09