Two centuries on consecutive days – that’s a first I think! After yesterday’s outing to Norfolk I decided to go in completely the opposite direction and ride over to East Cambridgeshire. My goal was to explore some lanes south of Newmarket and north of Haverhill that I hadn’t ridden before. And with good sunshine all was set for a thoroughly enjoyable outing. However, I had something of a false start as I suffered a rear wheel puncture after riding only six miles. Fortunately, there was a handy car pub car park so I was able to get in there, remove the punctured inner tube and replace it with a fresh one. And about ten minutes later I was underway again. 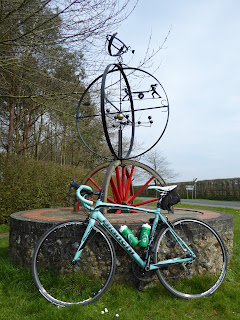 I rode to the west of Newmarket and on almost to the outskirts of Cambridge before turning east and crossing over the A14 and A11. This is gently rolling country with an underlying geology of chalk. A glance at a geological map shows that the chalk is an extension of that found in the Chilterns and it extends northwards past the Wash into Lincolnshire and East Yorkshire. Sorry for the details, it’s the onetime geography student in me that’s trying to escape. So the ride around here is a real delight with lots of attractive small scale valleys and over gentle ridges between them. I really enjoyed meandering around here for a couple of hours with no fixed route, just a general direction of travel.

Approaching the end of my meanderings I arrived at the village of Woodditton which boasts a rather splendid artwork. Despite searching on the Interweb I’ve been unable to find out anything about it. I’ll have to go back and ask someone as I feel there’s an interesting story to be told.

A lovely sunny day today led me north into the middle of Norfolk. Once I leave Watton I usually enjoy a sense of the ‘new’. This is because getting to Watton involves riding through countryside that I visit regularly. Here I should say that whilst I’m blogging about my century rides I also do a lot of sub 100 riding too. This means that the roads closer to home are much more familiar to me. Not that they’re boring; quite the opposite because I enjoy seeing how things change over time – with the different seasons, or perhaps as someone’s house building project develops. I am rarely short of enjoyment, entertainment and interest. But getting further afield brings with it different experiences. 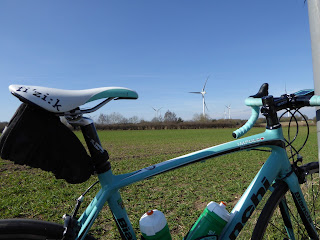 Today’s first landmark came as I approached a windfarm just south east of Swaffham. The road passes almost directly underneath one of the turbines and the shadow of its blades played across the tarmac. And the swooshing sound of the slowly turning blades is very distinctive. These are very large objects indeed, though I am told by those in the know that compared to the turbine farms in the North Sea they are not that big after all. Well, as I posed my bike for a photo they seemed pretty big to me. I wondered where the electricity they produce actually goes? 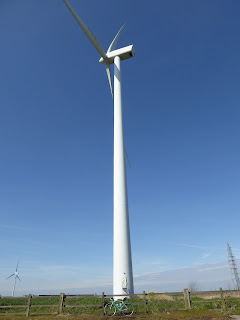 Passing through Swaffham I headed northwest towards the valley of the River Nar. That sounds like the title of a good book or film – ‘Into the Valley of the Nar’ – hmmm. Has an idea just been born? Probably not so I’ll stick to what I know about. The defining features of this part of the ride are long, straight roads. Many date back to Roman times. The countryside here is quite rolling so the straightness isn’t immediately apparent. But a glance at the map tells a different story.

Arriving at West Acre, one of the things of note is the theatre. It’s located in a converted Chapel with a studio seating 80. It hosts a range of in-house productions, visiting companies, concerts, workshops and other events. Their summer season, from May to August, has been running since 1990. Audiences are drawn from across East Anglia and beyond. The Theatre Company had won widespread acclaim and quite a few awards. Its patrons are Stephen Fry and Sir Anthony Gormley, so this is indeed a serious establishment. The parallel charitable foundation is dedicated to developing community participation in the performing arts and the involvement of young people. I always enjoy seeing how communities develop successful, distinctive and creative ways of enriching their lives.
Posted by Captain Century at 21:32