The choice of my route today was dictated by two things – the wind direction and the search for a crinkle crankle wall. So I headed out for the Waveny Valley towards Bungay and then Halesworth. With a south westerly wind I made good time and reached Bungay (35 miles) in under 2 hours. My hope was that as I eventually turned westwards for home, the wind would east as the weather forecast hinted.

I’m not sure what set me on the search for a crinkle crankle wall – I think I may have read something in the local newspaper. A search on the interweb uncovered a whole industry seemingly devoted to the subject. I discovered that Suffolk has more than double the number (50) of crinkle crankle walls than the rest of England. Now, I imagine that some of you might be wondering what on earth is a crinkle crankle wall. So let me explain. 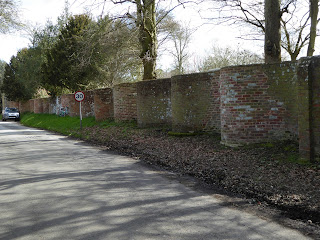 In simple terms, a crinkle crankle is a wavy or zig zag wall. Their chief advantage, apart from looking nice, is that they can be made just one brick thick. Build a straight wall one brick thick and the chances are that without buttressing it will fall over fairly soon. So the curves of the crinkle crankle provide strength and use far fewer bricks. 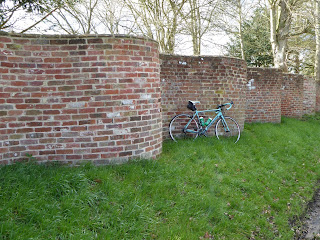 It is though that in Britain they first appeared in the mid 17th century when Dutch engineers were employed to drain the fens. In the Netherlands the design is called slange muur (snaking wall). Further afield, Thomas Jefferson constructed a crinkle crankle at the University of Virginia, enjoying both its aesthetic and economic benefits.

Leaving Halesworth I rode south to the village of Bramfield where I’d heard there was a good wall to be seen. And I was not disappointed. This was also a slight deviation from my usual route in this area so I had the added pleasure of enjoying some new lanes and some new views. Having a sight or place to aim for on a ride adds interest so I’m going to see if I can find some more crinkle crankles over the coming months. Apparently there’s a particularly good example in the village of Easton near Wickam Market – so watch this space.

Oh, I almost forgot! The wind did ease so I had a easy ride home.

Today was one of my more ‘routine’ rides which takes me through much of Thetford Forest. Having worked there some years ago, I always enjoy coming back to see what’s going on from a forester’s perspective. And please be re-assured, I don’t ride round singing “I’m a lumberjack and I’m OK ….” Those days are largely behind me now – the lumberjacking I mean; I have been known to sing from time to time – usually after a quantity of alcohol has been consumed. Anyway enough of this nonsense. 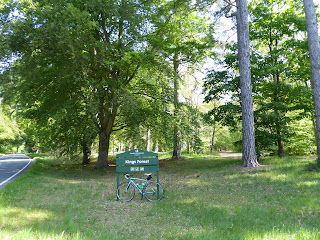 Thetford Forest really is an amazing place. I first went there in 1978 soon after I started working for the Forestry Commission. The main focus was commercial forestry, the growing of Corsican and Scots Pine to produce timber. About 300 people were directly employed by the Commission. There was even a mill in Brandon solely devoted to the production of pit props for the then National Coal Board. Producing timber for the mines was a strategic activity for the Commission. Most of the foresters were also keen conservationists and knew about the needs of some quite important and rare species which they protected in the course of their ongoing work. Most of this went on quietly behind the scenes with little fanfare or recognition. Most foresters preferred to get on with the job rather than talk about it. The forest was open for people, mainly locals, to enjoy and a network of waymarked trails and modest car parks were provided. From time to time, ‘special events’ – guided walks to see deer for example, were laid on. It was all pretty low key and informal though.

Today, the situation is very different. Timber production is still a key activity and generates valuable income for the Commission. But the forest is now much more than a simple wood factory. It is internationally recognised as a habitat of great importance, supporting many rare and endangered species. Conserving and enhancing the environment is often the starting point from which decisions about timber production are made, as opposed to the other way round. And perhaps the most significant evolution and the most visible one has been the explosion of use of the forest for people to enjoy. Opportunities for quiet walks and picnics are still available aplenty. But now the forest hosts a huge range of other activities for people, locally and from further afield, to enjoy. And perhaps one of the most significant has been the rise in the popularity of cycling. A rich network enables everyone, from families looking for traffic-free riding to mountain bikers seeking highly technical and challenging riding, to enjoy themselves.

So as I ride through the forest I see the trees but I see much more too. And the buzz of a chainsaw, the cry of a bird, or the laughter of a family all set against the swish of my tyres on the tarmac, invariably brings a smile to my face. Long may it continue.

Posted by Captain Century at 18:23