Having had a look at new, to me, parts of East Cambs a few weeks ago I was keen to return and see some more. And today seemed like the perfect day as it was sunny, with a light breeze and the prospect of the temperature rising into the mid-twenties. Quite possibly the warmest day of the year so far. 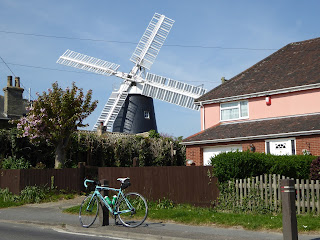 I made excellent time and paused in Swaffham Prior to look at a rather fine windmill. Originally built in 1857, the mill was mothballed in 1947 and restored to working order in 1991. It is now possible to flour made in the mill – either from the mill directly or from a several local stockiest. The mill is actually one of a pair, a sister mill across the road is in a rather more derelict state. Talking of two’s, the other notable feature ofd Swaffham Prior is its two churches in the same churchyard – Saint Mary’s and Saints Cyriac and Julitta’s. 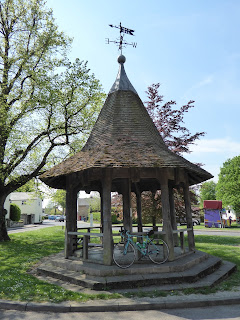 Leaving Swaffham Prior I then headed over in a south easterly direction through Fulbourn on the edge of Cambridge eventually reaching Linton where I turned north for Balsham. By now the sun was fully out and it was getting quite hot so I was glad of a shelter in Balsham where I could take some shade and enjoy a cold drink. Across the road a travelling fair was set up ready for an evening’s fun.

Then it was time to head broadly north east, towards Bury St Edmunds and home. All in all an enjoyable if unremarkable ride. And with a first hint of summer – hopefully a nice long dry one to come.

I had been suffering from cravings for a while so I decided to put matters right. A ride to the Suffolk coast and a Pump Street Bakery doughnut were at the top of the menu. When I’m down this way I always like to head over to Bawdsey Quay which involves a short detour of about 10 miles. One day I plan to ride to Felixstowe and then cross over to Bawdsey using the ferry. But I haven’t yet managed to plan out a route to get round Ipswich on quieter roads.

Today was a lovely sunny day so there were a few people on the beach soaking up the rays. On the way down to the quay I had passed on of those massive water sprayers irrigating a field of sugar beet. This was the first one I had seen operating this year so I wondered (hoped) if it was an omen for a fine summer. 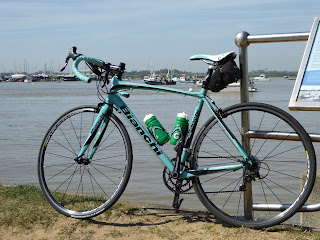 Bawdsey is the place where radar was developed and tested in the 1930’s. One of the people responsible for the invention was Robert Watson-Watt, a descendant of James Watt, the inventor of the steam engine. Inventing things must run in the family. The radar station has a number of open days during the summer.

Next, I rode over to Orford which was as busy as ever. A quick ride down to the quayside to take a few photos then it was back into the village for that doughnut. And a very good doughnut it was. So good that the bike had one too! 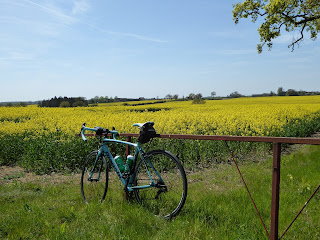 Resisting the temptation to linger and have another doughnut, I headed off to Saxmundham and Framlingham in lovely sunshine. All around me the fields were covered in the luxuriant greens and yellows of spring. This is riding at its very best. 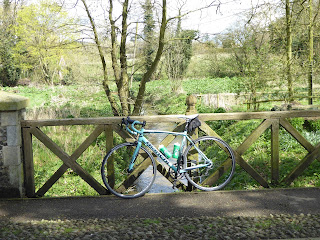 I have recently been reading Mark Taylor’s book, Edmund – The Untold Story of the Martyr-King and His Kingdom, who is something of a local hero, despite very little being reliably known about him. In 869, aged 29 he was killed by invading Danes. He was subsequently buried in Beadoriceworth (now Bury St Edmunds). Twenty years later he was declared the patron saint of England, to be replaced in the 14th century by St. George. Ironically, the very Danes who killed him came to worship him on account of a number of mystical happenings associated with him. And today, there’s a campaign underway to reinstate St Edmund as England’s patron saint. 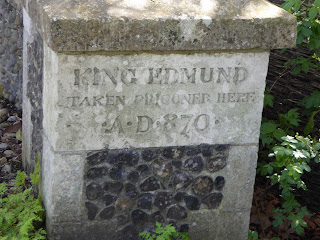 After refusing to surrender to the invading Danes he took flight and it is claimed was eventually captured while hiding under a bridge Hoxne. Legend has it that a newly married couple saw his gold spurs and gave away his location to his enemies. And according to the legend, St. Edmund put a curse on any couples who cross the bridge on their way to get married. His death, it is said, involved the Danes tying him to a tree and flogging him. He was then shot at with arrows and had spears stuck in him until he looked like a hedgehog. Then he was decapitated, his head thrown into a bramble bush and his body left where it lay. Sometime later his body and head were recovered and when placed together they became whole again. So today I decided to focus my ride on a visit to Goldstone Bridge at Hoxne where Edmund met his end.

Hoxne has one other claim to fame, the Hoxne Hoard. Discovered in 1992, the Hoard is the largest collection of late Roman silver and gold discovered in Britain. Nearly 15,000 gold silver and bronze coins together with 200 items of silver tableware and jewelry were found. Today the Hoard is on display in the British Museum

Today was a lovely sunny day so I decided to repeat my ride of 2 April and this time ride it the other way round. There was a real sense of spring in the air today and the distinctive yellow of oil seed rape crops was starting to show. The countryside really did look as if at long last it was waking up from winter hibernation. New shoots were showing on the oak trees and many of the hedgerows had a lovely green tinge from their flushing leaves. So I was more than happy to pedal around, not thinking about much in particular, and just enjoying the scenery. 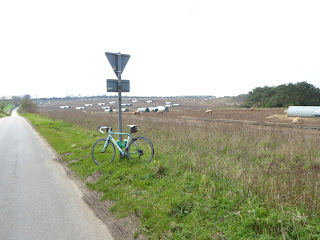 The one thing that did strike me was how significant the pig rearing industry has become in this corner of the country. Pig rearing has always been a significant activity but, and maybe it’s just my imagination, I sense that in the last couple of years the industry has grown to a totally new level. Many of the fields are now full of pigs and the assorted paraphernalia. The animals themselves don’t generally seem to be in any discomfort and appear quite happy to bury their snouts in the soil in search of whatever they can eat. One very striking feature is that fields with pigs in very quickly lose any surface vegetation and take on a scorched earth appearance. Consequently, there seems to be a regular rotation cycle to enable the fields to recover. For the most part the pigs are oblivious to my passing, just occasionally one might look at me rather disdainfully. Piglets on the other hand often seem quite interested in me, provided I’m not too close as I ride past. And they can be quiet interesting to look at, especially very young ones who are often quite playful with each other. So there you have it, Lejog Mark’s take on pig farming. 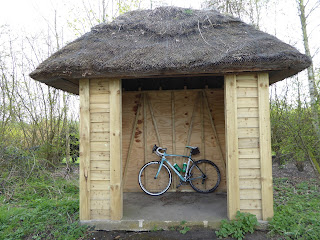 There was one other minor feature of note today – a new bus shelter, complete with its own thatched roof. This seemed to be entirely in harmony with the surroundings and certainly much nicer than the more usual prefab concrete block versions. So much nicer in fact that my bike was keen to try it out.

Today’s ride reprises a familiar theme. Having ‘discovered’ the world of crinkle crankle walls (C#5, 30 March) I was keen to see some more. My interest was piqued by a conversation with Mick Madgett who owns Madgetts Cycles in Diss. Allow me to digress for a moment. The shop has been in the Madgett family for three generations. I would describe it as a traditional bike shop – what it lacks in flashy modern presentation is more than made up for by the depth of knowledge that Mick and his team have couple with a quality of service that is second to none. And no, Mick isn’t paying me to write this. The two Bianchi’s I currently own came from Madgetts and have been serviced and repaired there as well.

Well back to today’s theme. I had called in at Madgetts and Mick commented that he had seen my blog about crinkle crankle walls. He mentioned that there was a particularly fine example in the village of Easton, near Wickham Market. He also told me about one in Eye, which I must have ridden past many times without noticing. So that largely determined the choice of today’s route. 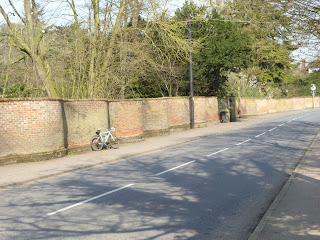 Arriving in Eye I immediately spotted the wall and was amazed that I hadn’t spotted it before. It runs along the front of Chandos House which was once owned by Sir Frederick Ashton, choreographer with The Royal Ballet. The property was well known for its weekend parties when the cream of London’s theatre and ballet stars would visit. Dame Margot Fonteyn was a regular visitor apparently. So this reminded me that I must ride with my eyes open in future to avoid missing out. 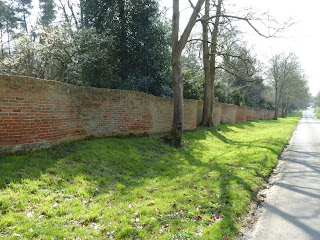 Having ‘ticked off’ the Eye wall I rode on to Easton which is between Framlingham and Wickham Market. This was a magnificent sight and is claimed to be the longest crinkle crankle wall anywhere –it was 2.5 miles long at one time; the longest continuous section is now about 0.75 miles. The wall achieved a certain notoriety in 2013 when a car crashed into it and demolished a 20-foot long section. Around 6,000 bricks were knocked over and 3,500 of them were cleaned and reused. The wall was eventually repaired at a cost of £20,000. The motorist has yet to be apprehended. As an aside I discovered while reading up about the wall that Easton Hall, the seat of the Duke and Duchess of Hamilton, was demolished in the 1920’s and rebuilt in the USA as a ranch house. Wow!

In a small celebration of crinkle crankle and in order to ensure that I crossed the 100 mile threshold today I followed a particularly wavy route for the last 20 miles of the ride.

Posted by Captain Century at 17:07