A Day of Two Halves

I took the Impulso which I'll be riding Lejog on over to Madgetts for a tune up - the headset, new cables and the rear gears needed some adjustment now that they've done a few miles following the recent rebuild. Chatting to the team in the shop I was reminded how lucky I am to have such a great bike shop on my doorstep. They may not be flashy, in the modern sense, but their service is outstanding and the enthusiasm and knowledge of the team is second to none. They are all bike mad and I sometimes wonder how they manage to get any work done amongst the chatter. I got some interesting comments about the hills on the last stage into John O'Groats which set me thinking. So, as cyclists say - Chapeau Madgetts! 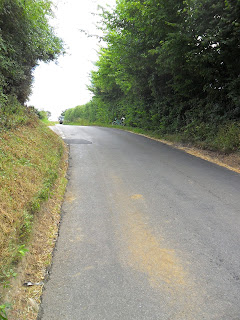 After lunch I took the Impulso out for a test ride. Everything was working perfectly and the gear changes were as smooth as silk. Now Suffolk is not a particularly hilly place - there are a few little bumps if you know where to look. So following this morning's chatter I went looking. My ride round south Suffolk would best be described as slightly lumpy - enough ups and downs to break the rhythm but nothing too testing.

Non cyclists don't really 'get' our liking for hills! But the sheer exhilaration of conquering a good climb is second to none. So I've been looking at the climbing bible - Simon Warren's 100 Greatest Cycling Climbs - and discovered that the Lejog trip involves at least three of them (reports to follow). One of my sponsors has offered me an extra £5 if I can beat the target time for one of the climbs. Hmm.

Posted by Captain Century at 20:15