Most days when I go out riding I follow a pre-planned route. This is normally because I have a certain amount of time available or because I can anticipate the likely effort involved. But from time to time I like to ring the changes and set off with no clear idea of where I'll go and just follow the road as the mood takes me. When I go for a random ride like this I do try to explore a lane or two that I haven't ridden before - which is not as easy as you might think.

Well today was a 'random ride day'. Feeling a little sluggish after yesterday's 100 I took it a bit easier. Nevertheless I had a great time and on the way I passed Gedding Hall which is where Bill Wyman (original bassist with the Rolling Stones) lives. This is a rather splendid 15th century pile which he's lived in for over 30 years. A bit of googling shows that he's also been quite a benefactor to the local community over the years. 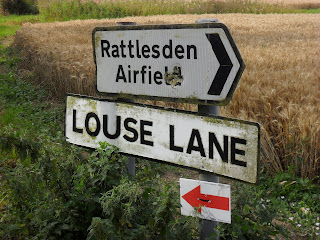 The 'new' lane explored today was the oddly named Louse Lane! I did wonder why the good old woodlouse should have been commemorated in this way. The Rattlesden Airfield sign looked like it has been used for target practice with a fairly serious gun. Unless someone wants trying to knock out the Woodlice.

After about 30 miles the sun shone so I felt pretty good and my legs had certainly loosened up by the time I got home. Then it was back to more mundane domestic matters.

Great too to see that some sponsorship funds are coming in following yesterday's emailshot. Huge thanks to all who have made such generous donations to help me support Prostate Cancer UK.
Posted by Captain Century at 18:59