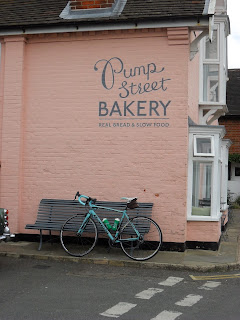 I managed to get a 100 mile ride in today. I decided to head down to Orford to visit the Pump Street Bakery and sample their excellent donuts. So excellent that they even got mentioned at this year's Oscars Awards ceremony by a local film maker. (Read about it here.) I also made a slight detour to pop down to Bawdsey Quay.

One of the things I really enjoy while riding is the chance to see some interesting wildlife. Because riding is a fairly quiet activity I can often get quite close to wild animals before they see me. Today I saw a female roe deer which did a handbrake turn when it registered that I was about 20 feet away! I also spotted a rather sluggish adder near the roadside. But the highlight of the day was a sparrowhawk which I recognised from its call.


I also 'enjoyed' a spot of road rage while passing through Framlingham. A young lad in a souped up Vauxhall Nova decided to overtake me at speed in a narrow road. He was so focussed on me that he didn't spot the Range Rover approaching him and had to slam on his brakes - squealing tyres and a bit of burnt rubber meant that he only just managed to stop in front of the Range Rover. The driver of the Range Rover, who was blocking the way ahead, and was a rather posh (judging by her voice) and stoutly built lady then got out and gave the lad a full on ear-bashing. He didn't know where to put himself and couldn't escape because I was right behind him, closely followed by a builder in a van who was laughing like a drain!

Going through the various villages I mused on the changing circumstances of that English village institution - the pub. More of that another  time - maybe .......!

Posted by Captain Century at 18:23