Click Here for Route Flyby
Well after my awayday in Lincolnshire and the recent excursion to north Norfolk I was back on familiar roads today. I’ve noticed that if I don’t get over to Orford about once a month my bikes get a bit uppity. So in order to maintain calm in the bike shed it was an Orford day. This was the 6th visit of the year.

I awoke to some splendid sunshine and after downing my breakfast was on the road by 8:00am. As it was likely to be a hot one today, I passed on my usual riding fuel of porridge and opted for some whole grain cereal with fruit instead. I figured this would keep me going until I arrived in Orford. I made excellent progress, aided by a light tailwind, through Debenham to Woodbridge. Ascending the small rise to I caught up with another rider and we had a brief chat for a while before parting company. 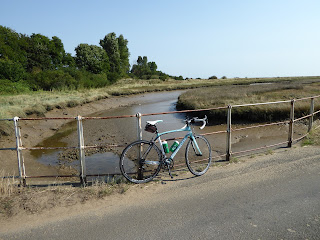 To ring the changes, I decided that today I wouldn’t go down to Bawdsey Ferry. Instead I thought I would go and have a look at Shingle Street. So when I reached Hollesley I turned coastwards down a narrow lane and across some salt marshes soon reaching my goal. The small hamlet of Shingle Street sits on a fairly exposed bit of the coastline and I reckon that it could be quite an exhilarating place in winter if there was an easterly gale blowing. And in those conditions, probably not the place to be with a bike. Today, it was blue skies, shimmering sunshine and a hot wind blowing inland. And it was quite busy too – lots of twitchers lurking with their massive telescopes and other paraphernalia.

Over the years Shingle Street has achieved a certain notoriety, especially amongst conspiracy theorists. The speculation has been fueled by the withholding of certain classified government documents many years after they would normally have been put in the public domain. In a nutshell the claim is that in 1940 German forces attempted to land on the coast here and were defeated. Reports abound of burnt and charred bodies in uniform washing up on the coast for some days afterwards. Estimates of the numbers vary considerably with some stories of a mass grave being dug on the beach or further inland. Well, whatever the truth, whole books have been written on the subject and the Internet is full of speculation. Google it if you want to know more. 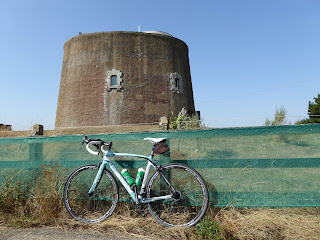 Did I mention that in December 1980, aliens landed just up the road in Rendlesham Forest? No? well that’s more Google time if you’re really that interested. And on a more down to earth note, there is a rather splendid Martello Tower here which can be rented out as a holiday cottage.

Anyway, be that as it may it was time to head over to Orford and the Pump Street Bakery to satisfy the Bianchi’s donut craving. I must tell you that my little diversion to Shingle Street was met with some scorn by the Bianchi who thought that I being deliberately difficult and keeping it from its desires. Anyway order was soon restored and we set off homewards.

The ride back was completely uneventful. But what I did notice was the strength of the wind. It does seem to me that 2016 has been a windy year. Nothing too fierce apart from the usual storms and gales. But pretty well every day I’ve ridden it seems that there has been a constant blow. In today’s warm temperatures it was like riding in Suffolk’s version of the Mistral. And when it’s in your face it does take the edge of the pleasure of the ride. Of course given the speculation about Shingle Street and the Rendlesham aliens I couldn’t help wondering if the wind was the wrath of a bigger force. No, we won’t go there. Goodbye!

Posted by Captain Century at 19:10