Writing about last Saturday’s ride I commented that Daren (Nairo) Morgan seems to be acquiring a taste for these century rides. He denies this, quite emphatically. So it was something of a surprise to get a text from him yesterday: “Now that I’ve fully recovered and ready to look at my bike again I wondered if you were planning any rides this week?” So I replied: “Am thinking of another century ride on Weds but haven’t decided where yet, maybe south Suffolk. Are your legs twitching?” Well that was all encouragement he needed. And I think I’m right about him acquiring a taste for century riding but perhaps he’s not quite ready to announce it yet.

So on what can best be described as a bonus day weather-wise i.e. bright warm sunshine we met at my house and set off on a tour round south Suffolk with bits of Cambridgeshire and Essex thrown in for good measure. Rather than ride a specific century route, I had joined together sections from three of my favourite rides which I hoped would give us an enjoyable and varied riding experience.

We initially headed west towards Newmarket before turning back eastwards for Clare, Long Melford and Sudbury. From there we headed south to Boxford and then turned north to Hadleigh and Needham Market and finally headed north west back home. It turned out to be a very enjoyable outing, marred only by that infernally strong wind and, in my case, a mechanical. I had changed my gear cassette to give me a slightly lower range of gears but unfortunately the cassette didn’t seem to want to mesh with the chain and kept slipping – despite making some adjustments along the way. So I’m going to have to revert to the higher geared cassette while I figure out what the problem is. But on a positive note, today my Garmin behaved exactly as it should do, unlike Saturday’s experience.

We had decided in advance to have our lunch stop at the attractive village of Boxford where I had previously spotted a promising café. Boxford is a very pretty village with a mixture of traditional half-timbered and clay lump buildings. The River Box (surprise, surprise) runs through the village which has two grocers’ shops – Boxford Stores and Village Stores – almost directly opposite each other. There’s also a butcher’s and, somewhat surprisingly for such a small rural village, Carmen’s Designer Shoe Boutique. The boutique is next door to the Coffee Box, which was the café destination. 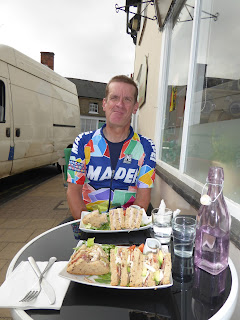 When we arrived at the Coffee Box it seemed to be doing a good trade. Daren asked if we could get a sandwich and was told that we could have whatever we wanted as they made them up to order. And they made then up as they went along! So Daren chose a chicken, bacon and avocado number whilst I opted for tuna mayo with red onions on wholegrain. As it was such a lovely sunny day we sat outside whilst our order was prepared. During a somewhat lengthy wait we watched village life pass along the busy main street. Most of the locals were pretty friendly giving us a nod or a cheerful hello. Eventually, our sandwiches arrived and we were in for a treat; triple deckers with green salad and optional dressing. So this was not going to be a light lunch. But certainly a very tasty one. Whilst taking the photo, the owner appeared to enquire if what we thought of the sandwiches – “good or bad?” “Excellent” was our heartfelt and unanimous response to which the owner said that they liked to do things properly! By now the sun was at full strength and I could feel my arms and legs warming considerably. How pleasant for the end of September. But after a ‘rest’ of nearly an hour it was time to set off again. With full stomachs I certainly found the next few miles a bit of an effort to regain my riding rhythm. 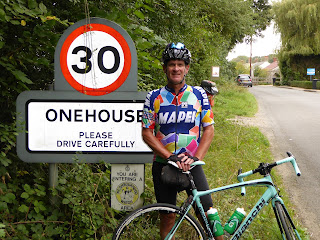 Nearing the end of the ride we passed through the hamlet of Onehouse. Now Onehouse, which is actually pronounced ‘Wunnuss’, was first recorded in the 11th century and is a translation from Old English of ‘āna’ and ‘hūs’ – the single or isolated house. Not surprisingly, today there are several houses!

Posted by Captain Century at 22:51