Click Here for Route Flyby
For most of my rides I follow a pre-planned route or a route that I’ve ridden before. I have a number of ‘standard’ routes that I ride quite regularly. And this has certainly been the case with my century rides. Today I broke the habit and instead of following a planned route I decided to ride a random one. Basically I set off and made it up as I went along – trying to ride on roads that I haven’t visited for a while. And in the end it all seemed to work out quite well. I’ve put the map of the trip up on the page so you can see where I actually went. 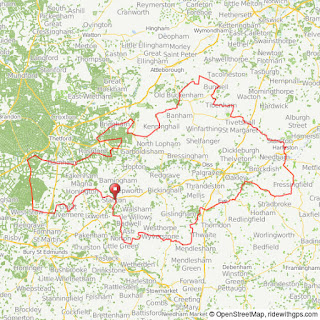 Normally I also write a bit about the route and the ride interspersed with anything else that takes my fancy for a little. Well again I’m going to be different and the only thing that I’ll say about today's ride is that in my quest for a photo I stopped at Old Buckenham to capture some amusing Norfolk dialect.

When I’m riding, apart from either looking at the scenery or other road users, I tend to do a lot of thinking. Much of this is pretty random stuff that you don’t want to know about. But today was perhaps a little different so, at the risk of inflicting a stream of consciousness on you, I’m going to share some of these thoughts.

Listening to the radio at breakfast I'd heard that some Russian hackers had got into WADA’s computer files and helped themselves to the medical records of several athletes, including Sir Wiggins and the Froomedog. This set me thinking about cycling dopers (which don’t include the aforementioned riders). Inevitably, I landed on Lance Armstrong and then thought that life was too short to spend it pontificating about cheats like him. So just let me say that when it all came out I felt incredibly let down and betrayed – as a keen cyclist and supporter of the sport. 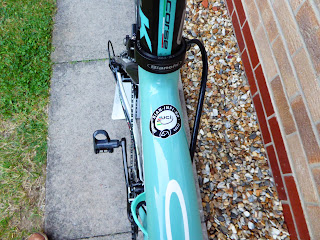 I quickly moved on and started thinking about where the boundaries lie, or perhaps should lie, between fair competition and the (over)use of technology. When I started cycling the frames of choice were made from steel tubing – Reynolds 531 or 753 being the best. Now, we have carbon monocoque frames which are both incredibly light and strong. Frames are designed to maximize aerodynamic efficiency. To set the boundaries, the UCI, Cycling’s world governing body, has established some standards and competition frame designs are approved by them. My Bianchi’s all carry the UCI approval sticker.

Components have improved beyond all recognition. Gone are the days of clunky, imprecise manual gear change mechanisms. Today closely indexed gear systems, often with electronic controls are the norm. And instead of 10 gears today’s bikes have 20 or 22 close ratio set ups to maximize the output and efficiency of pedalling. Clothing too has evolved. My early riding days were done wearing wool clothing, usually fairly loosely fitting which would double and triple in weight if it rained or when (not if) I stared to sweat. Today aerodynamic lycra is the norm and the materials used are usually breathable and fast drying if not water repellant.

Fuel has also changed. In the ‘good old days’ I often used to carry a jam or peanut buttie in my back pocket together with a banana. (I still carry a banana from time to time as some things are hard to beat.) Nowadays scientifically developed gels and energy bars are the norm, designed to refuel riders quickly. Whole books have been written on the subject.

Ideas about training have changed too. Today’s riders have access to huge amounts of data to record and assess their efforts in real time. Heart rate and power output are the watchwords. My first cycling ‘computer’ was a small odometer which fitted on to the base of the front fork and mechanically recorded the distance ridden. The clicking of the gadget was a sort of reassuring sound of progress. Effort and the like was ‘measured’ in terms of tiredness – during the ride and after.

So my thoughts were very much along the lines of where is the limit for what is a physical sport and test of strength – rider against rider? Is cycling getting too technology driven for its own good and is the massive investment made in the technology forcing riders down the doping route in order to perform and reap the rewards for their teams and sponsors?

One of my cycling icons is Barry Hoban who I had the honour to meet a couple of years ago. I remember reading the story of him working in Yorkshire then riding over the Pennines in the evening to compete in track races in Manchester and then riding back to Yorkshire after the track meet was finished. Apparently he rode his fixed wheel (i.e. single speed) track bike all the way there, turning the rear wheel around to get a higher gear for the track and then reversing the process before riding home. Now of course I’m not advocating that for today – I’d probably be lynched if I did. But it was the sort of approach to riding that really inspired me and I like to think that when I’m at a tough point on a century ride and struggling I can call on Barry for some inspiration. 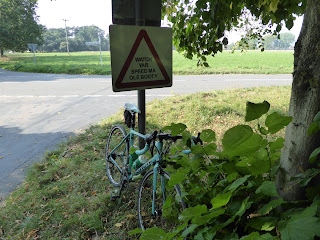 So my conclusion is we mustn’t forget that ultimately the challenge is about athletes competing against each other so that the best one wins. Technology can and does help, but it is always the athlete, the cyclist, who has to be supreme. And, as I was reminded by the Norfolk prose in Old Buckenham: “Watch Yar Speed Ma Ole Booty”. Although of course, they meant it for a rather different reason!
Posted by Captain Century at 19:37