Tuesday through Thursday of last week record-breaking temperatures were being recorded. I know this as I sweated through them. By Friday and Saturday things had turned nasty with heavy rain and high winds – not the weather for riding. Today was what I would describe as yer average autumn day – cool, light winds, overcast skies. But also good for riding. So it was relief here that I could get in the saddle again. 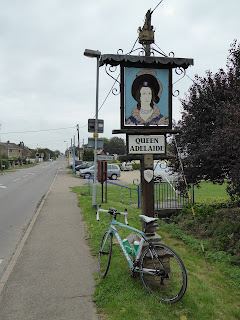 A few weeks ago on My Deer and Denver ride (C#22) I had ridden past Queen Adelaide, the place, not the person. This had piqued my interest so I decided to head over there today and find out a bit more. One of my mates, Daren (Nairo) Morgan had told me I had to go and photograph the level crossings. So, that was the plan.

Getting over to Queen Adelaide was easy enough and I made good time in lights winds and on drying roads. I got a tad annoyed as I reached the edge of the Fens near Mildenhall when I had to ride through some pretty mucky and smelly water which sprayed both me and my bike. So a cleaning session is on the cards back home. As I rode towards Prickwillow I could see the outline of Ely Cathedral to my left through the morning haze. This was a very impressive sight and I could imagine the pilgrims of old feeling mightily relieved when it came in to their view.

Reaching Prickwillow I turned left and was quickly at the sign for Queen Adelaide – and a level crossing. After getting the requisite photo for Nairo I pedaled on and after less than a quarter of a mile I reached another level crossing and took another photo for Nairo. Setting off again I managed to ride 600 feet before reaching – another level crossing! So another photo stop. All this stopping and starting wasn’t helping my average speed though. Looking at the map on my Garmin my heart sunk as I realised that a quarter of a mile further on the road crossed another railway line. This was getting silly! I rode on to discover that there was no level crossing, just a bridge. Relief. Job done.

As far as I can work out, all the level crossings and railway lines are part of some sort of system that enable trains travelling on the three lines that converge at Ely, to turn around. The rails looked shiny so they appear to be still in use. Hmm.  All the trains that I’ve ever seen around these parts are capable of travelling in either direction without turning round. I’ll leave it at that and if any of you are of the trainspotting persuasion then you either probably already know the reasons or can go and delve on the Interweb.

But let’s get back to Queen Adelaide. She was the wife of King William IV who reigned between 1765 and 1837. The Queen hailed from Germany and I was curious to find out what her connection was with this small hamlet in the Fens. My own bit of post-ride research revealed that there was no connection whatsoever. The hamlet of Queen Adelaide, which was established in the 19th century is named after the village pub which was built when the railways arrived. So there you are.

From Queen Adelaide I then rode north to Littleport which did make me wonder if it had at onetime been near the sea; highly improbable. In fact the name is a translation of the Old English for Little Market Town! Littleport achieved a certain notoriety when Battle of Waterloo veterans rioted in 1816 when they couldn’t find any work.

Leaving Littleport I continued to head north across the Fens along the splendidly named ‘Ten Mile Bank’ which runs along the west side of the River Great Ouse. From time to time the air was filled with the pungent smell of onions as fields of them were ready and waiting to be harvested. I also passed by loads of fields growing maze, which also looks nearly ready to be harvested. As I rode along I was buzzed by a low flying plane. Now, I have a fairly vivid imagination so my thoughts immediately turned to Hitchcock’s ‘North by Northwest’ and the scene where Cary Grant is chased through a cornfield on the Prairies by a crop dusting plane. Like I say, I do have a vivid imagination. My aircraft however continued onwards in a straight line until it disappeared over the horizon.

The remainder of the ride took me gradually east from Downham Market and across the Brecks before I turned south to head for home. There was even a hint of some warm sunshine, but it didn’t last. So I fear that autumn is upon us and am guessing that my days of riding in short sleeves and bib shorts are numbered. I would dearly like to be proved wrong on that score though.

Posted by Captain Century at 20:04