Click Here for Route Flyby
In a few weeks’ time I’ll be in northern Spain riding The Tour of the Pyrenees. This is likely to involve some pretty serious hill climbs so I thought it might be a good idea to get some training in. Watching the tv highlights of the pros climbing in the Pyrenees on the Vuelta probably won’t do much for my legs – sadly. So after careful consideration I decided to head over to Lincolnshire as the focus for today’s century series.

Pah! You’re probably thinking what a wimp. Lincolnshire’s all flat fens (and poachers) and there aren’t any hills. Well think again readers for I know differently. In the late 1970s I lived in the city of Lincoln and did quite a lot of training and racing, including some timed hill climbs. So there is a gradient or two. Perhaps not on the grand scale of the Pyrenees but, if my memory is correct, enough to make the leg muscles twinge and raise the heart rate. And anyone who has ever ridden the Lincoln Grand Prix won’t forget the cobbled climb of Michaelgate.

Now readers, indulge me in a little diversion for the benefit of any non-cycling readers who may not appreciate the subtleties of hill climbing. Hill climbs are classified on a 5-point scale with 1 being the hardest and 4 the least hard. Note I’ve referred to the least hard and not the easiest. Gradient and length typically determine which category individual hills fall into. As a rule of thumb a Category 4 climb will involve a mile or so at an average of 6% or 2-3 miles at an average of 4% or less. By contrast a Category 1 climb will be 3-7 miles at 8% or greater or 7-10 miles at about 6%. But these are broad indicators and other factors can come into play. Got it? Fine.

What’s you say? I’ve mentioned 5 categories but only described 4. Well I was just wanted to be sure that you were still with me. Yes, there is a 5th category. A category which strikes fear into the heads and hearts of even the best riders. The 5th one is the legendary Hors Category (Above Category). I’m going to leave it to you to work out what it means because even thinking about it makes me grimace and raises my heart rate.

Well thank you readers, that’s all with the explanations for now.

Today’s adventure started in Horncastle which is the southern gateway to the Lincolnshire Wolds (See, more hill references.) I was a bit later starting than usual as the drive over here had been quite slow. I think every farmer in south Lincolnshire had decided to bring their tractor on to the A17 for a test drive. But the sun was shining as I set off so that was encouraging. The first street sign I noticed as I left was ‘Langton Hill’ so that was a good omen. And sure enough I was soon going up. Vindication!! 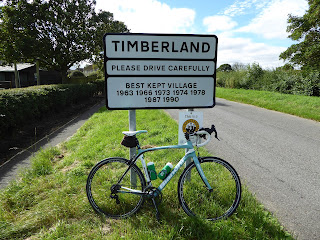 After cresting Langton Hill, I headed steadily westwards through Woodhall Spa and Martin before reaching Timberland. Now something strikes me as odd as this is the edge of the Fens and there isn’t a forest or a wood anywhere near the place. Even single trees are collectors’ items hereabouts. So the name does seem to be a bit odd. But what I struggled to fathom were the plaudits on the village sign – study the fine print in the photo readers. Has this place been stuck in a time warp for the last 25 years?

From Timberland I meandered around the lanes still heading broadly westwards. The meandering was in an attempt to revisit some of the roads that I used to train on when I lived here. And as I rode I replayed past road races and criteriums that I had competed in. I can remember going flat out on closed roads in the centre of Grantham for about 45 minutes with a large bunch of riders just hoping that either I didn’t get knocked off or slip on some pretty ferocious cobbles. I can also remember several races on active RAF airfields, usually in grey, damp, cold, windy conditions in spring or autumn. Fortunately Biggles and Algy were given the day off when we were racing. 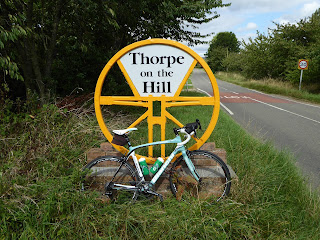 Gradually I got closer and closer to The Edge. No, not Bono’s mate. I’m talking about the Lincoln Edge, also sometimes known as the Lincoln Cliff. This is an escarpment that runs north-south through the middle of Lincolnshire overlooking the River Trent valley.  I got right up to the Cliff’s Edge (haha) before turning north to ride along it for a few miles. I was hoping to find the road we used to use for club hill climb time trials but my memory failed me so eventually I just turned left and headed down to the valley. Then I rode on to Thorpe on the Hill (see, I told you so) before heading round the west side of Lincoln. 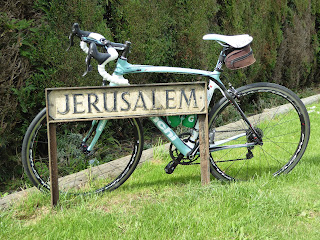 Another road sign caught my eye so I made a slight detour to visit Jerusalem. From there I headed over to Saxilby where I stopped to refuel before turning east and riding straight and then up The Edge.  Then it was an easy spin across to Market Rasen where I once worked before turning south to head back to Horncastle. One final bit of business entailed a visit to New York for the obligatory photo. Jerusalem and New York in a few hours – wow. I must be getting fast. 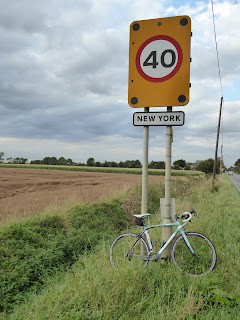 So there you have it, a day of hill climbing training. What’s that? How many feet did I ascend? Well, you don’t think I’m going to give out my training secrets do you? Well, I’m certainly not. But what I can say is that I’ve now been able to add a 6th category to the classification. Sous Category or Under Category. And I’m all made up by that.
Posted by Captain Century at 23:30