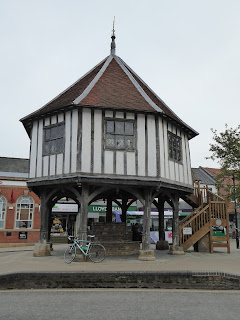 With a second day on the trot which promised fine weather I decided to go for it and ride another century. With the increasing likelihood of inclement weather as the year rolls on, grabbing any fine day is a must. Like most folk, I prefer not to ride in the rain. I decided to head northwards into mid Norfolk on the Ride of the Three Hams Route (C#23) which I last rode in mid-July. And to ring the changes I decided to ride it in reverse. Now as I’ve already written about the route a couple of times I’m not going to repeat myself here today. Suffice to say that I paused in Wymondham for the customary photo stop – of the rather fine Market Cross which was built in 1617 after the previous one was destroyed by fire. So that’s it, no more about today’s ride!

Instead I want to chat about something that’s both very close to my heart and absolutely essential to my continued pedaling success in this Century Series. So readers, today I’m going to sing the praises of the Local Bike Shop (LBS). I hope you enjoy, and can relate to the tune.  With the relatively high annual mileages that I do it’s inevitable that my bikes take a pounding and need quite a lot of tlc. Now, I can do most of the routine basics but I’m not especially mechanically minded so having the back up and support of my LBS is pretty critical.

My LBS of choice is Madgetts Cycles in Diss.  I’ve been visiting them on and off since I moved to East Anglia in the early 1990’s and over the past few years as I have increased my riding they have seen quite a lot of me. Madgetts is best described as a traditional bike shop. It’s not a flashy place, with lots of bright lighting and polished chrome displays. Quite the opposite. But what is (thankfully) missing in glitz is more than made up for in other ways as I’m going to tell you. It shares similarities with the first ‘proper’ bike shop that I can remember visiting as a teenager when I lived in the Chilterns and was getting into ‘serious’ cycling. So I feel comfortable there.

Now here’s the thing. Madgetts first opened its doors in 1924 and Mick, the present owner is the third generation of his family to run the shop. In fact, its roots go back further than that to the 19th century when a family ancestor used to run a cycle repair business. So that in itself says something – this is a business that’s been in it for the long haul. They stock a range of bikes. I’m pretty sure that there are people who got their first (kiddy) bike there, perhaps as a Christmas present, and over the years, have come back time and time again as both they and their cycling needs grow and evolve. I wouldn’t be surprised to learn that there are customers now buying bikes and bits there for their own children who were bought stuff by their parents. As I said, this is a long-term business.

Like most cyclists I do buy some gear off the internet – either special items or consumables where cost is a consideration for me. But in recent years I have bought my all Bianchi’s from Madgetts as I am strong believer of supporting local businesses where I can. But money isn’t everything, as they say. Ultimately, it comes down to relationships. And for me this is where Madgetts have the edge. Their knowledge and the quality of their service is, in my opinion, second to none. Let me back this up with two examples.

Last year, a few weeks before I rode from Land’s End to John O’Groats, I thought it would be a good idea to get my Via Nirone completely stripped down, cleaned and rebuilt with some essential replacement parts. In the five years since I had owned it the Nirone and I had travelled about 25,000 miles. And we’d had a lot of fun together. So I took the bike over to Madgetts and Mick said it should be ready in about a week. Well, by the time I got home a couple of hours later there was a message on my answerphone from Mick asking me to call him. 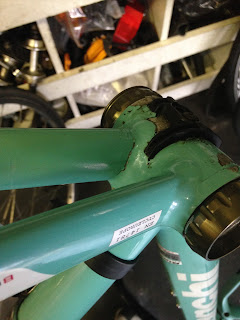 When I called he said there was good news and bad news. The bad news was that the frame had an irreparable crack on the bottom bracket where the chainstay was joined. My heart sank. Apart from the loss of a dear old friend I now faced the cost and hassle of having to get a replacement. Well not so, because the good news was that Mick told me the frame was covered by a 5-year warranty and he’d checked his records and could confirm that the warranty still had 17 days, yes 17 days, left to run! Phew. But what really put the icing on the cake was that Mick had already photographed the crack, emailed Bianchi UK with the information and a replacement frame would be sent from Italy in the next few days. Well, to cut to the chase within a fortnight I was riding on a brand new Impulso frame (the Nirone no longer being available) and fine tuning my Lejog preparations. Now that’s what I call service!

But it isn’t just about service, it’s also about knowledge and Mick and his team have it by the bucket load. Shortly before I went to ride in Tuscany earlier this year I was checking and adjusting my gears after fitting a new cassette to the rear wheel. Try as I might I just could not get the rear derailleur to engage the lowest gear on the cassette. So in desperation, and with more than a degree of embarrassment, I made the trip to Diss. Mick, who was there on his own working on a bike had a look at the problem and within seconds had worked out the cause. The gear cable, where it attached to the shifter in the brake hood, had become frayed. So no matter how hard I pushed the changer paddle all that was happening was that the cable was stretching. Now that’s what I call knowledge!

I’m guessing we all have our favourite bike shops and our reasons for liking them. Mick and his team, Tony and Sean, are all cyclists. So there’s a natural affinity there backed up by solid professionalism borne of decades of experience. I’m looking forward to benefitting from many more years of their knowledge and service. Chapeau Madgetts!

Posted by Captain Century at 19:49