Click Here for Route Flyby
My recent ride to Beccles (The Gateway to the Broads, C#35) sparked a thought or three. How about a ride round the Broads themselves? I’ve ridden in parts of the Broads several times but I’ve never done a ride that was pretty well all in them. So I thought I could plot out a route and hey presto a ride would unfold. Simples. 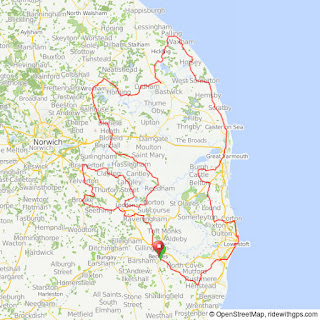 Wherever possible I like to ride on minor roads or B roads, avoiding A roads which tend to be busier - well maybe not in the more distant extremes of East Anglia. The Broads are formed around a number of rivers which flow generally eastwards into the North Sea at Great Yarmouth and Lowestoft. The area is very low lying, with some parts below sea level. As I started to plot the route I quickly discovered that the major challenge, if I was going to stick to those quieter roads, would be finding places to cross the rivers. After a bit of trial and error, well actually quite a lot of it, I had the makings of a route. As you can see from the map. Routing up the coast was easy; once I got inland amongst the Broads I was going to have to weave around a fair bit to find those crossings and achieve the necessary hundred miles. Eventually I had a route plotted and loaded onto my Garmin.

So, setting off from Beccles the first small challenge was to find the start of the route as I had parked a little distance away. (Note to self: next time start and finish the route from the car park!) After a couple of wrong turns I eventually escaped from the clutches of Beccles and was heading south east under hazy skies and light winds with the prospect of a hot day developing. Pretty quickly I was into the edge of the Broads which I could sense more that I could actually see. Then I was into the centre of Lowestoft with my first sight of the sea. Leaving Lowestoft I turned inland to keep away from the busy A12 before reaching Great Yarmouth.

I can clearly remember the last time I rode in Great Yarmouth. It was on Stage 1 of the Tour of Britain in 2012. Well, not the ToB as ridden by the professionals but a sportive for people like me which was run on the full Stage the day before. It began in Ipswich, made its way up the coast turning inland just beyond Great Yarmouth and then heading west above Norwich to Dereham before turning back to finish at the Norfolk Showground on the edge of Norwich. A total distance of 130 miles. And the reason for it sticking so clearly in my memory was that I rode in a group of about 20 riders with a full police escort. The Police motorcyclists used us to fine tune their procedures for the start of the real race the following day. Now I have to tell you that riding through places like Lowestoft and Great Yarmouth on a Saturday morning accompanied by a couple of dozen motorcycle outriders who stopped all the traffic, did wonders for my ego. And I reckon added at least 5mph to our average speed. Sadly, soon after leaving Yarmouth our escorts must have decided that they had had enough because they left us to our own devices. But the memories are great! 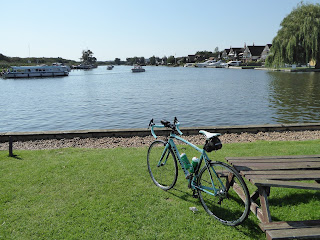 From Yarmouth I continued up the coast but didn’t actually see the sea. I resisted the temptation to head down any of several lanes signposted “To the Beach”. Inland, the terrain was pancake flat and I could see occasional views of the Broads with their distinctive grazing and flood meadows. And in one or two places I went below sea level! I soon arrived at Sea Palling where I turned inland to get right amongst the Broads. I stopped at a very busy Horning to get a photo of a typical Broads view before crossing the River Bure at Wroxham and heading south east to my next goal, Reedham. 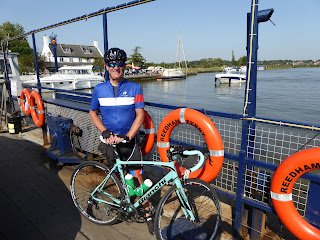 Reedham is unusual in the Broads as it has a ferry crossing over the River Yare so I didn’t want to miss out on that. It’s a chain ferry which can carry three cars at a time (or many more bikes). There’s been a ferry crossing here since the early 17th Century and it is the only river crossing between Norwich and Great Yarmouth, shaving 30 miles off the journey. So I paid my £1 and enjoyed the short ride.


From Reedham, with a brief stop at Loddon to get some water, I then rode along the southern side of the Yare valley back towards Norwich to load up the mileage. Turning south east again I should have had a relatively uneventful ride back to Beccles. I say “should have had” but it wasn’t quite like that.

Firstly, and in an attempt to avoid going back into Loddon and riding the same roads again, I thought I had plotted quite a crafty route to the south. Well, perhaps it was a bit too crafty. Let me say that a very pleasantly smooth tarmac road became a bumpy tarmac road with grass growing down the middle which after a couple of miles led to a stony, gravelly, brambly track for about a quarter of a mile. This was what some cycling commentators call a “technical section.” Fortunately, with a bit of walking and bike carrying round some brambles I got to the other side unscathed. Apart from the risk of falling off, my main concern was avoiding a puncture – changing a tube in the heat of the afternoon sun would not have been fun.

Anyway, with the technical section behind me I was soon back in the groove and riding at a reasonable pace again.  I arrived at the busy A143 which I needed to cross. A suitable gap in traffic appeared so I set off. Whilst I was waiting a white van arrived on the other side, signaling that it was going to turn right. Now on the basis that (a) I was there first; (b) had the right of way as I was the one crossing straight over and not turning; and (c) critically the white van driver had nodded, smiled and I’m pretty certain beckoned at me I figured that I was good to go. Fortunately, I kept my eyes on the van driver, trying to hold eye contact because she suddenly came forward, forcing me to take extreme evasive action, before she stopped again with a loud squeal of her tyres. Luckily, I managed to stay upright, avoid physical contact and was even able to share my knowledge of certain highly descriptive Anglo Saxon terms. To which I can report that eye contact was most definitely NOT returned. The irony was that the white van had the NHS logo on it – which, had physical contact been made, would have been interesting at the very least.

So unbattered and unbruised I headed off back to Beccles and I can report that the final few miles were unremarkable in every respect.

Posted by Captain Century at 22:19