There are some things you’ve just got to do, so today was a doing day! A couple of weeks ago I planned a route to a special site that I just had to visit. Now, not knowing the Los Angeles area or having any experience (at that time) of riding on its roads, choosing the route was a bit of a challenge. My tool of choice for route planning is Ride With GPS which is pretty easy to use; you just select a starting point and then click on the roads you want to follow to reach your destination. The trip I wanted to make involved riding about 25 miles right across the heart of Los Angeles and I had absolutely no idea of which roads would be suitable for the ride. All the more so because I also had little idea of the ‘rules of the road’. Well, I did know that they drive on the other side of the road here and they don’t seem to have roundabouts. Beyond that I was in the dark.

With Ride With GPS on my screen I also opened up Google Street view together with an LA cycling map. The latter showed that there were lots of opportunities – dedicated cycle paths and cycle lanes on various main roads. Unfortunately the ‘map’ was a diagram, not a true scale map so that only partly helped. Anyway, to cut a long story short, after a couple of hours of plotting and a certain amount of cursing I had what I thought was the ideal route for crossing the cities and minimising exposure to traffic. So, as they say “I was good to go”.

Last night I met Pete Wilson, who hails Miles)from Troon in Scotland and will also be riding to Boston. We had previously exchanged a few emails and had spoken on the ‘phone so it was good to put a face to a name. When I mentioned today’s plan, Pete was keen to join me and I was delighted as I knew it would be good to have company whilst riding across new terrain.

We had a bit of a false start before setting off when I discovered that I hadn’t actually downloaded the route onto my Garmin. There was no way I was going to ride blind across LA. Fortunately, I’ve brought a back up Garmin with me and that did have the route on it so after nipping back to my room to get the back up we were soon underway, heading for the coast and the cycle path north that I rode in Monday. Arriving at Venice Boulevard we turned north east. Now Venice Boulevard is a pretty busy road, a bit like Edgware Road in London if you know it. What Venice Boulevard does have that makes it suitable, is a dedicated cycle lane. It runs dead straight for 6 miles with, as we discovered, lots of crossroads complete with traffic lights which involved quite a lot of stopping and starting.

This part of the ride was pretty dreary as we passed through  what would best be described as a low rise concrete jungle. Tightly packed housing areas interspersed with small fast food malls and budget shops plus an assortment of warehouses, depots, breakers yards and so forth meant that the view was rather less than inspiring. But it was the quickest way to make progress and with a tail wind we rolled along easily. Eventually we reached our turning point and decided a coffee stop was needed. We found a suitable place and I was able to introduce the CV to a ritual much beloved by its siblings. Yes, the CV enjoyed its first donut (note American spelling)! 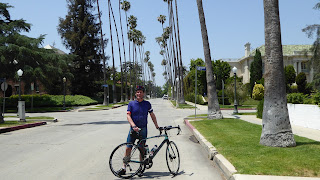 Suitably refreshed we turned north west and in the distance, through the haze we could just make out our goal.  With a couple of turns onto minor side roads to get through Hollywood without putting our lives at risk on the exceptionally busy roads, we entered an area which was a total contrast to where we had been. Now we were amongst some spectacular designer houses set in quiet side streets lined with towering palm trees. This was clearly where the rich people live. Yes, the rich people, but not the very rich people – they are tucked away even further inland in the hills.

Eventually we reached the final stretch and the main event of today’s ride – a sharp 14% climb complete with hairpin bends up through Beachwood Canyon. The sun was shining so we were glad of the shade provided by the trees lining the road. Suddenly we crested the hill, the landscape opened out and following a short descent we arrived at our destination – a close up view of the iconic Hollywood Sign. This is one of the defining sights of the area. Originally constructed in 1923 to advertise a local property development, when it read ‘Hollywoodland’ it has remained in situ ever since and become one of the most visited sites in the area. The metal white letters are each 45 feet tall and it was built at a cost of £15,000 (equivalent to about £225,000 today). The sign fell in to disrepair and in 1978 was restored following a public campaign led by Hugh Hefner (Playboy magazine founder). Nine celebs paid for one letter each – Hugh got the ‘H’ (no surprise there); Alice Cooper paid for the penultimate ‘O’ as a tribute to his friend Groucho Marx.

After posing for photographs, we retraced our route back to El Segundo. We both agreed that despite most of the ride being uninspiring it had been completely worthwhile. And for me, it was another thing to cross off my bucket list. You can see our route by clicking here.

Posted by Captain Century at 07:12