Today was a big day for several reasons as you will discover if you read on. We left Las Vegas in the usual cool early morning air. The weather forecast was telling us that today was going to be hot and within half an hour I could feel the temperature rising. The Route Sheet and Paula’s commentary at the Route Rap gave an indication of what we were going to face. The key words were “No restrooms or services for 74 miles.” Written in bold which is usually a clue for some pretty serious hazards along the route. So it seemed that today’s comfort breaks might involve a rattlesnake check…! 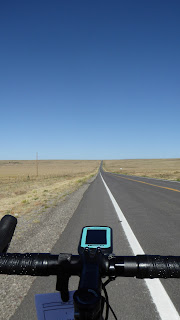 Like our last two stages, we left Las Vegas heading upwards. Unlike the last two stages the ascent was very gentle – almost imperceptible. We were still at 6,500 feet so my lungs got their early morning workout. One thing I noticed immediately was the greenness of the vegetation so I guessed there must be marginally more rainfall here. I did see more damp watercourses and even a few streams with water which reinforced my thinking. This was cattle country and what country it was. Emil, who I was riding with at the start said it reminded him of being at sea – vast oceans of scrub grass stretching for miles in every direction. I spotted a couple of buzzards (I think) circling above the roadside looking for breakfast, but no albatrosses.

As is often the case when I’m riding with on good roads with few hazards or traffic, my mind tends to wander in random directions. Emil’s comment triggered vague memories of some Coleridge’s Rhyme of the Ancient Mariner:

The fair breeze blew, the white foam flew
The furrow followed free;
We were the first that ever burst
Into that silent sea.

I tried to sing the lines that I could remember to the tune of Jerome Moross’s soundtrack to the film ‘The Big Country’. Now readers, bear with me. This might seem a pretty avant-garde thing to do or even rather eccentric behaviour but what I’m trying to convey here is what I was seeing and how it made me feel in my heart. Riding through some amazing territory, the sweeping strings and pulsating brass of the soundtrack just seemed so right. Today I felt like a pioneer, exploring a vast new landscape, soaring along just above the tarmac like the albatross over the ocean. The long, long straight roads punctuated with gently rolling hillocks were just so invigorating. 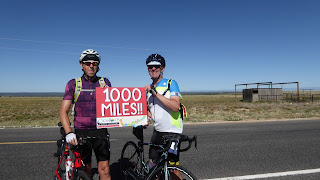 In seemingly no time at all we reached the first SAG and I was snapped out of my reverie. Standing by the roadside waiting for riders to arrive was Paula. And I her hand was a sign, a very special sign. For today we had all completed the first 1,000 miles of the tour. A landmark moment and I was thrilled to see the joy and happiness on the faces of my fellow riders. So I’m just going to say “Well done us!” I was so happy that I even tried reprising my little ditty but fortunately no one heard me. 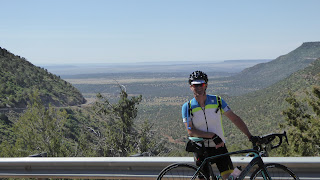 With an air of satisfaction we rolled out of the SAG and continued on our way. At around the 35 mile mark we swung round a bend and, totally unexpectedly, the most magnificent view to the plains below opened up in front of us. This marked the start of a stupendous descent, dropping over 1,000 feet over the next 5 miles. Enough of a drop in altitude to make my ears pop. Ahead of us lay a vast plain, framed by rust-red tree covered cliffs. And stretching away as far as my eyes could see, was the road we would be following. I experienced something that I’m not that well known for – speechlessness.

Reaching the bottom of the descent we carried on along a smooth, gently downhill trajectory and with a good tailwind we spun along at an easy 20-25mph. With a small uphill bump we reached the second SAG where we enjoyed an early alfresco lunch, including those yummy peanut butter and jelly sarnies that I told you about a few days ago. Just the fuel for the hungry cyclists. With the temperature building, it was hard to resist the temptation to linger and snag a second sarnie but we needed to press on and make as much progress as possible before the temperature rose too high. 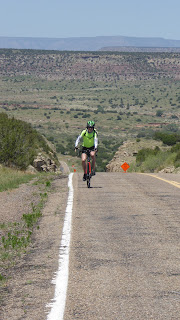 Ahead of us lay something that several riders had mentioned in rather hushed tones over breakfast. A climb known as The Wall. No one seemed quite sure what it would involve and attempts to zoom in on the route profile didn’t help much. Just the name seemed to be enough to invoke a tremor in some of my fellow riders. What was certain was that we would reach The Wall at mile 67. Pete and I were riding together at this point and ahead of us we could see some cliffs rising steeply to, we guessed, about 1,000 feet. There even seemed to be a road line. Surely not. And, indeed not. The road turned at the last minute and we rode parallel to the cliffs before eventually turning towards them and a cleft in the rock face. I could then see the road rising up and it didn’t look to severe, about 700-800 yards for perhaps one third of a mile. Not a particularly testing ascent. What I did discover was that it wasn’t the gradient that was the issue, it was the heat. As I rode up the narrow, very hot gorge I felt like a piece of toast in a toaster. Fortunately I popped out the top just nicely crisp and not burnt!

There was a nice surprise at the top because I met Phil, one of the riders, and Rick and his wife. Rick doubles as the tour mechanic. Phil was leaving the tour today, getting a lift from Rick and wife. Rick will be back in about a week’s time. I had chatted with Phil over breakfast and he seemed a bit subdued. Partly I sensed because he was leaving and also because he wasn’t sure if he would have the time to ride as far as The Wall. Well he did and I was pleased to see him again, to shake his hand and wish him well. Chapeau Phil! 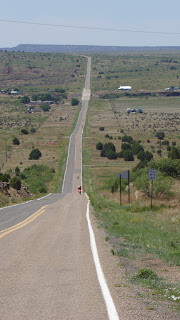 Emerging from the toaster, another 10 miles took us to the final SAG of the day and, that rare facility on today’s stage – Restrooms! They temperature had risen significantly now – my Garmin was suggesting 35C/95F (40C/104F in direct sunlight) – so I sought out a cooling ice cream and an ice cold drink in the store. The final 30 miles to Tucumcari were tough – long, rolling straights (one measured 10 miles), heat which collected in the furnaces between the hillocks, no shade and a hot side wind. This was very much about riding within my limit, especially as we have another long at tomorrow.

The final ascent in the full heat of the day was quite a challenge – physically and mentally. Pete and I eventually arrived at the top in Tucumcari with our water bottles empty and we landed on the first gas station we passed like crows landing on carrion, much to the amusement of the cashier and the apparent disgust of at least one customer who clearly wasn’t a connoisseur of hot, sweaty, lycra clad cyclists!  Then it was a short pedal to our hotel where I rode straight in through the doors to the reception desk to check in. An ice bucket full of cold bottles of beer was ready and waiting. Then after I had whetted my whistle it was time for a shower.  This had been quite a tough and long (110 mile) stage but a rewarding one. And once I’d showered I felt pretty good. NO, I actually felt really good. So good that more words from the Rhyme came to me:

Swiftly, swiftly flew the ship,
Yet she sailed softly too:
Sweetly, sweetly blew the breeze –
On me alone it blew.

Chatting about the ride after dinner I learnt that much of the country we had ridden through today was seen in the film ‘No Country for Old Men’ starting Javier Bardem, Josh Brolin and Tommy Lee Jones. So if you want to get a better feel for the scenery watch the film. I have and it’s really rather good.