It was over a year ago that I finally took the plunge and booked my place on what I hope will be a stupendous adventure. Initially it all seemed a bit like a distant dream but at the turn off the year the prospect of what lies ahead became much more real. As I write this I am sitting on the upper deck of a BA Airbus A380 with an 11-hour flight to Los Angeles ahead of me. So, as I have some ‘free time’ ahead of me I wanted to reflect on my preparations and look forward to the challenge that lies ahead of me.

The last few weeks have been quite hectic with lots of final details to be sorted out. Getting all the essential bits and pieces of kit together, making sure my bike is prepared and ready and also doing enough riding to stay in shape. Making sure I had sufficient time to ride has been really important. I belong to the Eddy Merckx school of preparation; the key to success being miles, lots of miles. As I leave the UK I have managed to put over 5,000 miles into my legs since the start of the year. Disappointingly, a higher proportion than I would ideally have wished has been done on the turbo trainer in my garage reflecting the crap weather we seem to have had. However in overall terms I am slightly ahead of where I was this time last year and I feel pretty fit. So the prospect of riding 3,400 miles over 44 days is something I am looking forward to. From the comfort of my plane seat at least.

Riding over the last 7 days has covered the full spectrum of British weather. Last weekend was wet and cold with, at one point sleet and hail. Yesterday was quite the opposite a hot 70 miles around the Fens with Nairo and Richard. If there is one aspect of my preparation that I have missed it is the opportunity to ride in sunny, warm or hot conditions. With the prospect of crossing the Mojave Desert (30 degree plus temperatures in the first week) I suspect I may be in for a bit of a roasting. And, disappointingly, my tans lines are rather feeble. I fear that my pasty white legs might provoke some disparaging looks from my fellow riders.

Most of my riding over the last few weeks has been enjoyable if somewhat uneventful. Tuesday’s outing boosted my heart rate when I was hit by a motorist cutting the corner at a T junction. Fortunately I managed to avoid any damage to the bike and the driver was probably more shaken up than I was. The only injury to me was a dent to my dignity as a result of my last second evasive gymnastic manoeuvres. In the couple of seconds of the incident, which seemed like minutes, I had visions of my tour ending before it had even begun. But it seems that the gods were smiling on me. I’m hoping that this was an omen for the coming weeks. Not that I’m superstitious.

I was up early this morning (6am) and after breakfast and a few last minute tasks, loaded the bike box and my hold-all into a hire car and drove down to Heathrow. I hate last minute rushes and would rather arrive far too early than be gnashing my teeth as I crawl along the M25 which I’ve done before! As it turned out there were no delays and I arrived nearly four hours before departure time. The biggest challenge was finding a petrol station to top up the car before I handed it back. It took a mere while 15 minutes to deliver the car and use the hire car company’s courtesy shuttle bus to Terminal 5. Checking in was effortless; the only delay was getting approval to take some Co2 canisters for inflating my tyres. After a phone call to the back office I was cleared to put them in my bag to go in the hold. 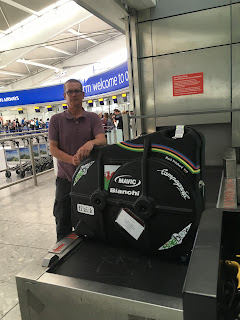 Once I had checked in and dropped my bag I had to take the bike box across to the oversized luggage counter – I was the only person there. The attendant looked rather bemused when I asked if he would take a picture of me. But after a bit of negotiation involving the use of the phrases “riding for my country” and “riding for charity” he grudgingly obliged. As you can see. Now at this juncture I just want to let you know that “my country” is Wales (the bike box is suitably flagged) and the “charity” is the Green Light Trust (GLT). I am sure that as the tour progresses my identity as an honorary Welshman will become apparent. And I am certainly going to be making a bit of a noise about GLT. You might even receive an email from me asking you to sponsor me (there’s a link at the top right hand side of this page) and if you don’t get an email, please don’t feel left out. You can still sponsor me by clicking on the Virgin Money Giving link. Despite the fact that Terminal 5 was heaving with people flying to all corners of the world, I was through security and into the departure lounge in under 5 minutes. I forgot to remove the coins from my pocket so I was taken to one side for a pat down!


Somewhere below me in the hold is (hopefully) my bike packed in its case. We’ll be reunited later today and tomorrow’s first order of business will be to put it together and take it for a test ride. I’ve brought an assortment of tools with me to help with this. The box is scheduled to be collected from my hotel in LA on Wednesday and Fedex’d to Boston to await my arrival. My Bianchi Owners Club USA cousins put me in touch with a company called BikeFlights, which is run by some cyclists. You make a booking online with the dates and locations involved, they sort everything out and email back some shipping labels. So that’s one logistical problem less. The box is far to big to transport in one of the tour support vehicles.

So that’s all for now readers. At last I am underway! I’m feeling very excited, but also a tad apprehensive about what lies ahead. Apart from the riding and enjoying the scenery I am really looking forward to chatting to lots of Americans and finding out what makes them tick. It seems to me that this is a really interesting time to be in this country and learning lots. I’m hoping to make some new friends too with the other riders on the tour. Through these pages I do hope you will join me on the tour and share some of my excitement as I make my way east to Boston. I’m planning to have a real blast!

Posted by Captain Century at 22:30