It’s 5:30 am and breakfast time in the hotel in El Segundo. Everything I could want is available at the buffet. I settle for some orange juice, scrambled eggs and bacon, a bagel with strawberry jam and coffee. I’ve spent a few moments listening in to the chatter in the room. I wasn’t eavesdropping on other peoples’ conversations but instead testing the temperature and sizing up the mood music. What I heard was lots of happiness; people who like me, were ready to ride. Interestingly what I heard and saw from the body language was a mixture of eagerness with a trace of uncertainty, For all of us, and I suspect even those who have previously competed what I am about to attempt, nothing is totally certain about what lies ahead over the next 44 days. Each of us is going through our own pre-ride preparations – some quite obviously so; other rather more nonchalantly. For many, including me, we are on the threshold of what will be the adventure of our lives.

Suitably fuelled up I returned to my room to don the lycra, including the tour jersey, for today’s ride and to finish packing my bags. Each of us has been provided with two kit bags and Paula has told us that we are limited to a maximum weight of 30 lbs. That’s in total; not per bag. It was quite a struggle to zip up the bags containing all the kit and caboodle required for a seven week trip. After a certain amount of shoving a squeezing I was quite satisfied with my efforts and my bags were done up tighter than I thought possible, Feeling pleased with myself I have a final look around the room and to my horror I spot my trainers and a pair of shorts. So it’s back to opening up the bags again. Eventually I manage to squeeze everything in and take the bags down to reception to be loaded by Itchytoo (I’ll explain another time) into the support van. Then I return to my room to collect my bike. 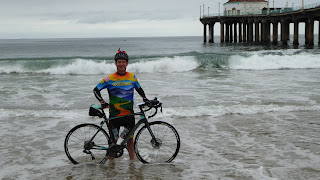 We are soon all ready to go and Paula gives us some final instructions on getting down to Manhattan beach for the official start. We ride the 2-3 miles there in convoy and then it’s time for the traditional wheel dipping ceremony and photographs before we’re ready to set off. Mary, one of the tour crew takes an interest in my damaged left knee, even taking some photographs. I may have to keep an eye on her! We immediately head due east and inland along a succession of long straight and generally smooth roads. It takes a while for smaller groups to form. At the start of any tour riders go through an introductory process as they discover who is similar to them – in terms of riding ability and temperament. Gradually the groups form through a sort of natural selection process.


The ride out of LA is largely through a never ending succession of business parks and industrial estates interspersed with small, budget type shopping areas and low cost, densely packed housing. From what I can see as I ride along it all looks fairly random and is quite different from the more planned approach to development that I am familiar with in the UK. Today is Mother’s Day so on many of the street corners, flower sellers are busy trying to win the attentions of passing motorists. The traffic seems to ebb and flow as we progress. We pass over dozens of crossroads where traffic from every direction has to stop and then following what to me is an unfathomable code, moves off. It seems to happen quite naturally and with good grace. That doesn’t stop me making hard eye contact with any motorist who might cross my path. It amuses me to think that back in the UK we have developed a rather more precise solution – roundabouts!

In what seems like no time at all we arrive at the first SAG (Support and Gear) stop. Paula and her team have a great selection of fruit, drinks and snacks ready and waiting for us. We are required to sign in and out at each SAG so that the support team know who is on the road. Leaving the SAG I like up with Pete and two other riders, Robert and Emil. Robert is one of the support team and lives in Riverside, today’s destination. Emil is from Switzerland. We make good progress until I am late signalling a pothole causing Pete to ride straight into it and suffer a rear wheel puncture. (That’s going to cost me a beer this evening.) Following a tube change we were soon rolling again. 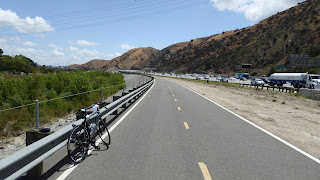 We continue to  pass through a succession of districts (I missed the point where we left Los Angeles County, the density of business premises and housing reduces. The properties offices and industrial units are also newer so there is an atmosphere of greater affluence. In the distance I can see some hills which are gradually getting closer. They are dissected by numerous ravines, gullies and small canyons – scenery that I have seen before but only in films. We ride parallel to Route 91, sometimes passing over and under it on a fabulously smooth tarmac surface. The highway is incredibly busy with every lane full of traffic – mostly heading past us towards LA.


As we enter the hills we turn on to the Santa Ana Bike trail, another wonderfully surfaced route, and gradually head upwards to the second SAG. With the sun now shining brightly and the air gradually warming it proves to be just the spot to grab some fruit and top up my water bottles. I’m wearing a pair of brightly coloured socks which match the tour jersey and they catch Paula’s eye. In a moment of weakness I promise to give them (washed of course) to Paula at the end of the tour. Me and my big mouth ….

Resisting the temptation to linger in the sunshine we head off again on the final leg of the stage. This proves to be the best part of the day. We roll gradually downhill and onto another long straight avenue. This time we are amongst some lovely houses. The avenue is lined with mature palm trees. For miles and miles, beautifully coloured roses mark the central reservation. In places I spot orange groves, heavy with their brightly coloured fruit. What a wonderful way to end a great first day! As we near our destination Robert takes on the mantle of tour guide and shares a few snippets about Riverside.

Arriving at the hotel, anther Marriott Courtyard Inn, check-in is a breeze. I take my bike to my room to find my two bags are already there. (Thanks, Itchytoo – you are a ‘top man’.) Then in true pro-rider style I jump into the shower, fully clothed to wash my riding gear. Once I’ve peeled off the lycra it’s time to wash me. Then after wringing out the lycra, rolling it in a towel and hanging it up to dry overnight I search out a milkshake and a slice of lemon drizzle cake to complete my end of ride refuelling. Within an hour of arriving Pete and I are sitting round the hotel’s pool in the sunshine, enjoying a refreshing a bottle of beer and reflecting on our first stage. I have a sneaky feeling that, based on today, this tour is going to be a blast. Laters, readers!