Today was a cause for celebration, or so I thought. The day’s route involved very little Interstate riding which I have to say I haven’t really been enjoying – who does? It’s been a sort of necessary evil. Instead we were going to step back in time and spend most of the day riding along the iconic Route 66. I was really looking forward to this for several reasons. First and foremost it was a chance to experience a slice of American history. I’ve read several books about journeys along the highway and have also seen several documentaries. One of my favourites is the film of the trip that the Big Yin, Billy Connolly made. He has a wonderful talent for getting the best out of the people he met on his travels. And his trademark and sometimes self-deprecating humour means that he never takes himself too seriously.

Getting out of Gallup was pretty straightforward although there was quite a lot of traffic with people going to work. I could feel the CV shudder slightly as we approached the intersection for the Interstate then relax noticeably as we rode past the onramp and onto Route 66. I think I even heard it give a little whoop of joy! I was distracted at the time as my Garmin was misbehaving and wasn’t loading the route correctly. After a few attempts too reload the route I gave up. Today wouldn’t involve much navigation and the Route Notes had all the information I needed. 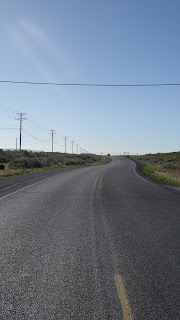 Once out into the countryside I could see the road stretching invitingly ahead of me. With virtually no other traffic this was a great time to enjoy the sights and sounds of the countryside we were passing through. For the first time for several days it was even quiet enough to hear the birds singing which only added to my feeling of elation. With the road stretching into the far distance I thought I could go off the front and grab a photo of The Fabs from afar. So I changed up a couple of gears, stood up and gave it all I’d got – like a sprinter. As I shot past them I heard a couple of confused shouts. “Photo opp” I replied. (I later discovered they didn’t hear what I had said and thought I may have been stung by a bee!) Anyway I rapidly opened up a gap of about 400 yards before reaching a gentle incline, about 1%. Suddenly I realised that my breathing was laboured and remembered that we were still at 6,500 feet. Looking back over my shoulder I could see that the gap was now holding, not increasing. So I pulled over, extracted the camera from my back pocket and just as I had got it focussed the Fabs passed me. But I did get a nice shot of a long, straight and empty road.

After 16 miles unfortunately Route 66 was no longer available and we had to turn on to the dreaded I-40 for the next 10 miles. The good news was that none of The Fabs had a puncture. The bad news was this was probably the worst stretch of Interstate we had ridden to date. The shoulder was very rough, to the point of being unrideable so we had to sit between the white line marking the side of the carriageway and the vibration strip which warns vehicles when they drift off the carriageway towards the shoulder. Riding on a strip of tarmac about 6 inches wide with heavy lorries passing at speed about 18 inches away was quite unnerving. Fortunately we covered the 10 miles without incident and eventually turned off I-40 for the day’s first SAG. 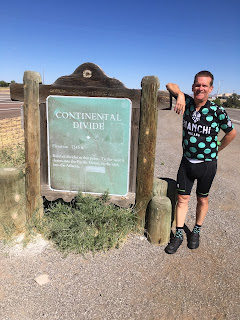 The SAG was at another landmark on the tour. We had now reached the Continental Divide at an altitude of 7,275 feet. This is a mountainous hydrological line that runs from Alaska in the north through the Rockies and thence down through the Andes to Tierra Del Fuego. Water landing on the western side flows into the Pacific and on the Eastern side into the Atlantic. In the time honoured tradition, I nipped behind the store to conduct a little experiment – I had a discreet pee. So now, some of my waters are making their way to the two oceans!

Once out of the SAG it was back onto Route 66 for the rest of the day – yaay. This was really enjoyable. We were in a sort of sandwich between the Interstate on our right and the railway line on our left. The road itself was very quiet – so quiet that we could ride two and sometimes even three abreast. With virtually no traffic, it was a time for looking around and admiring the scenery. Away to the right across the desert was a range of hills about 10 miles away which looked like they were covered in forest. On our left were some lovely ochre and red sandstone cliffs and bluffs a couple of miles away which had been weathered into some amazing shapes. In front of us was a range of mountains, the tail end of the Rockies which I guessed rose to over 10,000 feet.


As if the scenery wasn’t enough we were passed by a succession of freight trains. Each one was at least a mile long and pulled by up to five diesel engines often with another couple of engines at the back. They chugged by at around 40 mph and took several minutes to pass us by. I tried counting the number of container wagons on one and lost count at about 65! Several of the trains had two layers of containers, one above the other which added to their sense of power. A couple of the trains were loaded with lorry trailers which to me seemed a great way to reduce the volume of long-distance traffic on the highways.

As we made our way along the road the wind turned so that we began to ride into quite a strong headwind. To beat the wind we formed a chain-gang and did some through and offs, with each of us taking a turn on the front for about a mile before peeling off to rest at the back. At one stage when the road changed direction so that the wind was bowing onto our shoulders we formed an echelon to maximise our efficiency. After several days of being together our formation riding is now almost instinctive. What this also meant was that we could sustain a good pace in spite of the wind, so that we arrived in Grants by early afternoon. 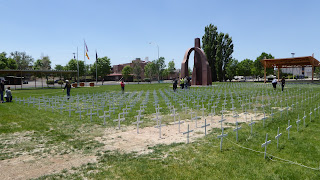 As we rode in, Pete spotted a rather different Route 66 sign so we pulled over for a photo. Just adjacent to the sign in a large grass area I saw a group of people carefully placing small white wooden crosses in the ground. I strolled over to find out more and discovered that this was a civic group who were preparing for Memorial Day on 28 May. This is a federal holiday to commemorate the people who died while serving in the country’s armed force, rather like Remembrance Sunday in the UK. As I stood and reflected on the row upon row of white crosses I found it quite moving to think that in a small town of about 10,000 people so many have given their lives.


Then it was a short distance to our hotel which, despite our early arrival, was ready and welcoming. As I wheeled my bike into my room there on the bed were my two bags, delivered as always by Itchytoo. This is one of those small details that makes such a difference at the end of a day’s riding. Finding my kit ready and waiting for me instead of having to lug bags and bike along unfamiliar corridors makes it all so easy. All I then have to do is unearth my sponge bag and clean clothes and dive into the shower so that I can wash off the road dust and grime and become human again! Itchytoo surpassed himself again this evening with a magnificent catered dinner of barbecued delicacies.

So, both a day to celebrate and a day to reflect. And another day closer to the Atlantic. Will I arrive there before my pee does? When I switched off my Garmin I noticed that today I had ridden 66 Miles on Route 66. Co-incidence or what?