Holbrook, where we stayed overnight has a fairly colourful history as a wild-west town. The most notorious incident occurred in 1887 when the Sheriff, Perry Owens confronted four members of a local family, the Blevins, who had been involved in a number of crimes, including stealing horses (punishable by hanging). In the ensuing gunfight, Sheriff Perry emerged unscathed, one of the Blevin bothers, and a friend were killed; the other brother was wounded. This apparently considerably elevated the Sheriff’s reputation as a man not to be trifled with. Today, Holbrook is a rather more sedate place and from what I saw, exists as a transport hub. The constant flow of trucks and trains and the large number of motels and budget hotels, diners and fast food outlets, with the associated services all point to this. 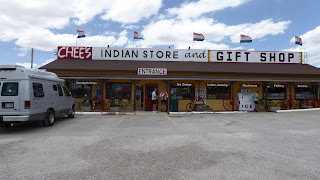 Today was another transitional stage and a day largely spent on I-40.  Once again the massive desert landscape defined the riding. Much of the land was uninhabited though from time to time we passed small, ramshackle houses – some abandoned, others still lived in. It struck me that it must be really hard scratching a living here. All around were signs highlighting that we were in Navajo territory. Our second SAG was at an Indian Gift Shop. After a cooling ice cream I checked my rear wheel to discover that it was going soft. Closer inspection revealed that the tube had been pierced by two of those infernal metal shards from burst truck tyres so a tube change was needed. 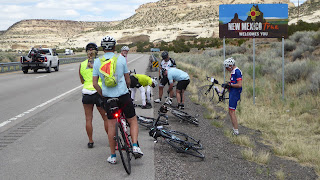 It would seem that almost everyone has had at least one puncture today, some more – one of the downsides of residing on the Interstate. There is no really viable alternative available. The impact of what sometimes seems like a never-ending succession of punctures on the tour riders has been fascinating to observe. Although for all of us a puncture is a frustrating and annoying event I have also noticed that it has become a unifying force for the riders and support crew. We all help each other whenever we can – in a variety of ways. Sometimes just a word of encouragement is all that is sought or needed. At other times a helping hand is gratefully received. Occasionally, strength and a bit of experience is the answer. All delivered and received with good humour and grace. As a lesson in team building this strikes me as a benchmark that many in business and industry would pay large bucks to have in their own situations.

After riding across Arizona for the last six days we finally crossed the state line into New Mexico. All told we have ridden over 400 miles across the state. To put this in context, Arizona is about 1.25 times the size of Great Britain and is the sixth largest US State. New Mexico bills itself as The Land of Enchantment – I can’t wait to see how this manifests itself. Crossing the State line also marked a another change as we passed out of the Pacific Time Zone and into the Mountain Time Zone. That means that we have ‘lost’ an hour today. 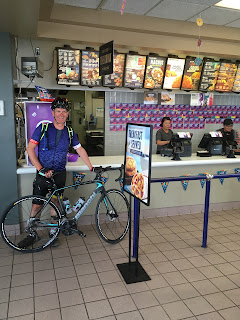 Approaching Gallup, Pete and I, together with Robert and Robin, two of the tour support crew, pulled in to a Taco Bell outlet for a spot of end of stage refreshment. Robin very kindly bought as all Taco’s – the CV had its first one and says “big thanks Robin”. Then it was a short spin down to our hotel for the night – the Comfort Inn. Soon after arriving I realised that I had left my Camelback containing tools and a small about of cash at the Taco Bell so I had to ride back to collect it, adding an extra 10 miles to the day’s total. Doh!


Today was also a happy day and a sad one. Navi, one of the tour riders found out this morning that she has qualified for medical school. Compared to some of the team she is relatively new to cycling and seems to be really enjoying herself. Bob, one of the more experienced riders onto tour leaves us today. Bob is best described as a ‘character’ and I am going to miss his friendly greetings. We celebrated with beer and cake – as all good cyclists do! Chapeau Bob and Navi!