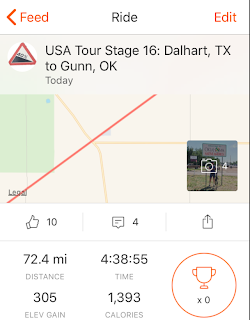 Well, this seems to be habit forming – riding long, straight roads into the wind. Today’s straight set a new record – 49 miles from the edge of Dalhart to the edge of Texhoma. All with a head or shoulder wind. The Fabs linked up with another team to form an extended pace line which made the riding easier, mush easier. Both physically and mentally. It was great to see us all riding in a line, sharing out the work efficiently. I occasionally have a tendency to go off the front a bit hard and have come to rely on Pete to keep me in check. Speeding up at the front of the line is considered poor etiquette so, fellow riders, if I was ever guilty of this then I apologise whole heartedly. My excuse is that without significant hills back home in East Anglia, I have got used to riding solo on long exposed roads.

I remember a story about the Belgian rider, Freddy Maertens, who twice won the World Professional Road Race Championships (in 1976 and 1981). Apparently, he used to get up in the early morning, feed, get ready for a ride and then step outside. Next he would work out which way the wind was blowing and set off riding as hard as he could with a tailwind. He would ride flat out until he was totally knackered and then guess what? He would turn around and ride home into the headwind!! Freddy had an extremely successful career as a pro – his achievements might have been even greater had his racing not coincided with the best years of Eddy Merckx. Freddy was one of my inspirations when I started riding seriously as a teenager and in my early 20’s. 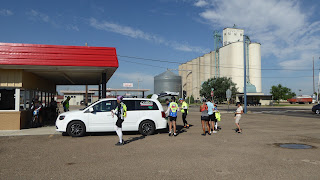 Anyway, let’s get back to today’s ride. After stopping, literally in the middle of nowhere, to take a picture of a cowboy we carried on along the road to Stratford, which I am guessing The Bard would probably have been underwhelmed by had he been able to drop in. Stratford was the latest location secured by Crossroads Cycling Pop-up Diners Inc. To ring the changes Paula had provisioned it with some lovely sweet nectarines. Even the labels were edible – a Texas delicacy? Something unexpected happened to me here. I met the late Henry John Deutschendorf Jr’s cousin. Yes, I did indeed. What’s that I hear you say? Well, Henry John Deutschendorf Jr. was better known as John Denver, the singer songwriter who tragically died while flying his experimental plane in 1997. Of course I have no way of verifying the ‘cousins’ claim but a look into his eyes was returned with an unwavering stare and his handshake was Texas firm. 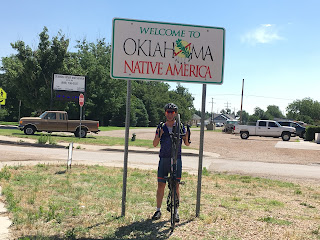 At 50 miles we left Texas – our route north-east meant that we only clipped a corner. Now it was into Oklahoma. Subtly, the countryside around us was changing. Yes, still a lot of cattle territory but also signs of a new crop – wind turbines spinning gently and gracefully. Another memory of East Anglia, particularly Norfolk. I also had a brief vision of Don Quixote astride his horse Rocinante accompanied by his companion Sancho Panza, tilting at windmills. It’s the heat, readers! I must have been in the sun far too long. There were other clues too to the nature of life in these parts. Huge billboards advertising water drilling services, wind pumps and irrigation pipes all pointed to the importance of that most precious of resources. 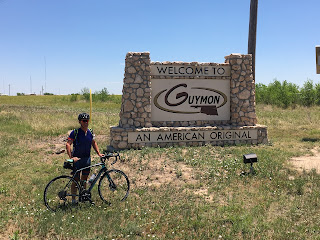 In record time we arrived at our destination, Guymon, which has branded itself as the “Queen City of the Panhandle”. The Oklahoma Panhandle is the northwest portion of the State. Look at a map and you’ll understand. I’ve looked at a map of tomorrow’s route. Can you guess what I’ve seen? Answers in an email please ….