I ended my last post with a little teaser courtesy of Gerry, the rider I met on yesterday’s ride to Santa Monica. Well I can now let you into the secret. This morning at 6:30am Gerry and I met outside my hotel and we rode over to Helen’s Cycles, a local bike shop to meet up with Jens Voigt who is in town to do some promo work in connection with the Tour of California which starts on Sunday in nearby Long Beach. Jens retired from racing in 2014 following an successful career which included wearing the yellow jersey and wining two Tour de France wins as well as victories in numerous other classic races. He also briefly held the world hour record. He is perhaps best known for his catchphrase “Shut up legs”.

Together with a group of other cyclists we rode over to Palos Verdes largely following the same cycle route as yesterday but in the other direction. Jens and I had a long chat as we rode along together. He was interested to hear about the tour to Boston and asked me about the other tours I had ridden. Our conversation wasn’t restricted to cycling – he quizzed me about Brexit (!) and we exchanged some thoughts about the (lack of) affordable housing in London.

Palos Verdes is another of Los Angeles County’s 88 cities. It sits atop a peninsula with dramatic views over the ocean.This is prime real estate country – the security gates and cctv, expensive cars sitting on driveways and some spectacular architecture all point to money – lots of money. One of the most spectacular buildings is the Wayfarers Chapel designed in 1951 by Frank Lloyd Wright. The glass chapel sits within a redwood forest and if time had allowed I would loved to have visited it.

Having made our approach along the seashore we reached the summit of Palos Verdes by a long climb with several hairpins and sweeping bends. Rising nearly 1,000 metres over about 5 miles this was the first bit of proper climbing that I have done for a while. It certainly got my heart rate rising. The fast descent was equally thrilling. A wide, smooth road with lovely sweeping bends meant that I could put the CV properly through its paces for the first time. I wasn’t disappointed.

Returning to sea level, we retraced our route back to Helen’s Cycles before we all headed off in our different directions. So having flown 5,000 miles it was quite a surprise and great fun to ride with Jens. It quite made my day. 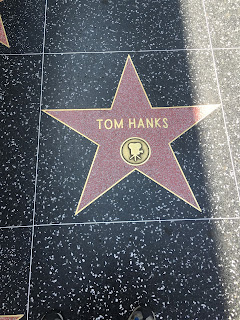 I spent the afternoon doing the tourist thing with a visit to Hollywood to view the sights. And I have to say that I was pretty disappointed. Although it was quite amusing to be star spotting on the Walk of Fame I thought that the whole place looked pretty shabby. Walking along the Boulevard I lost count of how many times I was propositioned. No, not that sort or proposition readers. I’m referring to hustlers vying with each other to offer the best minibus tours of the area. I walked the whole length of the Boulevard, hoping it would get better and when I eventually realised this wasn’t going to happen I crossed over an retraced my steps, pausing top get a photo of the famous Capitol Records Tower. So feeling that I had rather wasted my time I got the metro back to El Segundo.

Posted by Captain Century at 14:43