Yesterday was a rest day so it was a chance to look around the city of Santa Fe. Most of the places we have stayed in so far on the tour tend to be located on the edge of the town and they all look and feel the same – as if they have been made from kit. A sort of concrete lego set. They’re purely functional serving the needs of overnighters. They’re fine as far as they go but totally lack character and feeling. I’m not criticising here; they are ideal for this sort of tour, easily accessible on the edge of the town or city. Totally predictable in their standardised offer so no nasty surprises. Nothing to be worried about or get in the way of the essential start and end of day routines. What this does mean though is that, with a few exceptions, I’ve probably got a totally skewed view of the places we’ve stayed in. So I was delighted to have the chance to go and feel the pulse and take the temperature of Santa Fe which has lots of history and culture. 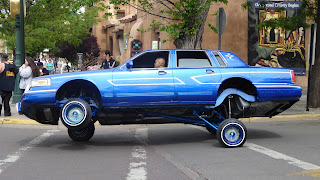 Pete had a couple of contacts here – friends of friends of his brother in law, if you can follow that, who had got in touch with him and who had offered to meet us and introduce us to Santa Fe. So we moseyed on down to the Plaza in the heart of Santa Fe to meet Dan and Phyllis for brunch at the Famous Plaza Café. Over a wonderful fry-up we got to know them and quickly felt at ease. Once we had completed our introductions we had a look around the Plaza which was very busy – there was a parade of custom cars taking place which drew lots of spectators. We had a look in a local museum as well as visiting a Fair with Indian art on sale. Dan and Phyllis then left us to our own devices and, on their recommendation we walked up Canyon Road to look the dozens of art galleries there. 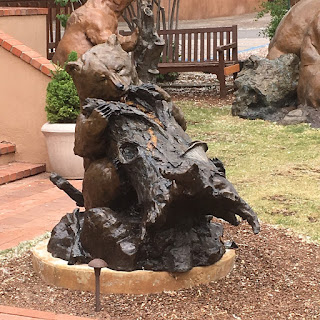 This was a fantastic area with more small galleries than I could shake a stick at. I could easily have spent a couple of days looking around and even then probably have only scratched the surface. I enjoyed chatting to several of the artists and gallery owners along the way. I especially enjoyed chatting to Kat Livengood (click here) an artist who photographs wildlife, particularly horses in the wonderful landscapes of the West. I was captivated by her black and white work where the grain, textures and tones of her images totally capture the sense of place. The landscapes evoked powerful memories of what I had seen and felt over the last few days. Sadly, I don’t have the words to fully express the feelings that Kat’s work evoked in me but I felt privileged to have had an opportunity to see it. As someone who has spent most of my life working in the natural environment I was delighted too to learn that Kat donates a proportion of her income to conserving and supporting wild animal welfare. Sadly, all good things must come to an end so after meeting Dan and Phyllis for a farewell pizza and beer we were back in our hotel for an early night before resuming the tour. 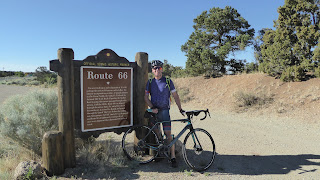 The sun was shining as we left Santa Fe bound for Las Vegas, New Mexico, not the other more famous one, this morning. I make this distinction because when describing the route to several people they’ve looked askance at me when I’ve mentioned the LV place and I’ve had to clarify for them. Including for a surprising number of New Mexicans, if that’s the correct term. Otherwise thickos if it’s not! So readers, I wouldn’t want you to make the same mistake! Rather like on Stage 12 we started with a long steady climb to 7,500 feet over the next 20 miles. Once again my breathing was feeling the effects of the altitude – having to work a bit harder to get sufficient oxygen to fuel the effort of riding uphill. Nothing significant and I certainly wasn’t suffering from altitude sickness but just enough to make the effort slightly harder than I had anticipated. In these massive open landscapes it easy to forget that we are riding at quite a high altitude. 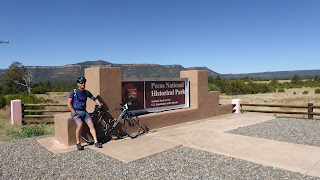 In a complete contrast to previous days we had something new to admire today – trees! Most of today was in the Santa Fe National Forest and Pecos National Park. The Forest covers an area of about 1.6 million acres with 1,000 miles of trails for visitors to explore by bike, on foot or on horseback. The area is rich in wildlife and nearly one third of the area is designated as wilderness. My forester’s eye was inevitably drawn to the tree species (Pinyon and Ponderosa Pines, Douglas Fir, Oak, Aspen and Juniper to name a few). Overall the forest seemed to me to be in pretty good shape with evidence of active management, some past fire damage and examples of excellent habitat conservation. If only I had the time I could have spent several days exploring the area. Maybe I should come back…?

As we passed through the town of Pecos I was reminded of the infamous Judge Roy Bean, a saloon keeper and justice of the peace, who anointed himself as the ‘Law West of the Pecos’. His courtroom was his saloon and he used to dole out his version of justice whilst seated on a whisky barrel. It is probably best to describe his life as “colourful”. Several books have been written and tv series ands  films featuring the judge – most with a large helping artistic licence. 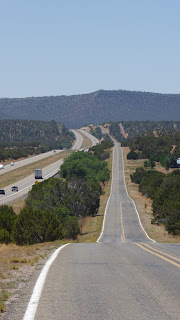 With a tailwind for most of the day we made excellent progress – at one point I looked down at my Garmin to see that I was spinning along easily at 33mph. There was only one SAG today at 46 miles. Just as we were about to leave there was a large pop followed by the hiss of air. Poor Emil had suffered yet another rear wheel puncture – and he wasn’t even on the bike at the time! No matter, The Fabs and Dana (Paula’s husband) sprung into action, a new tube was swiftly installed and we were underway pretty quickly. The last leg of the ride crossed what seemed like a never-ending succession of rolling hills. None was particularly long or steep but there were a lot of them. Some of the downhills were quite fast (40mph), some of the uphills had me changing down to my granny ring in order to get up them. One of the things I’ve discovered that my Garmin does is count the number of gear changes I do with my Shimanono Di2 electronic gears. I appear to have shifted the rear cassette 758 times today and the front one 30 times.  Did you need to know that? Probably not. And whilst I’m telling you about the technology I’d like to confirm that my brakes are fully operational – the guys at Bike n’Sport in Santa Fe have done me proud. Going downhill knowing that I’ve got maximum braking capability should I need it, is quite a satisfying feeling!


We had made such good time that we rolled in very early to Las Vegas. There was only one thing to do. Head for the old part of town and seek out the historic Plaza Hotel. A cold beer, a massive and very tasty meatloaf burger and chips more than replenished the calories that my Garmin told me I’d burnt today. That Garmin is so clever it can probably tell me what I should eat a week on Tuesday! Then it was time to head for another Lego kit hotel – this time of the Best Western breed.

Oh, I nearly forgot a bit of good news. When I logged onto the Interweb at the hotel I discovered that the Froomedog had won the Giro. What a fantastic achievement. I can’t wait to watch the highlights ...