The cast of today’s story include a donkey, a hooker and a tin man! Today was also notable for a number of other reasons. First it was a short stage, only 40 miles. Second it was the last leg of the seemingly never-ending 210-mile long straight which started two days ago. And lastly, and most importantly, a tailwind was a-blowin’; yay! Last night we had a couple of minor thunderstorms, the second of which woke me at 1:30 am with hail drumming against my bedroom window. I got up to have a look and the sky was being lit up by distant lightning flashes and I could see a few golf-ball sized hailstones bouncing in the parking lot with a small river flowing through it. A reasonably spectacular and unexpected entertainment. By breakfast time, signs of the storm had largely disappeared, just a few puddles on the ground and air which felt clean and clear but much more humid than yesterday.

As this was a short day we didn’t set off until 9:00am but nevertheless I was still awake at my usual hour of 5:30am so I used the time to do some background research on the Interweb, the results of which I hope will feature in the book I’ll be writing about the tour when I’ve finished. Let me just say that I unearthed some fascinating social history commentaries from the 1920’s through to the late 1950’s which explained a few things that have piqued my interest on the ride so far. 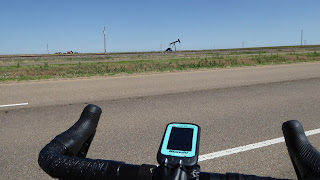 Unusually, we all left the hotel together in one large group and headed down the road. I found myself alongside Emil and as we wound it up together we progressed right through the group becoming the leaders on the road. With the aid of the wind and on yet more smooth tarmac we were soon zipping along effortlessly at nearly 25mph. What fun! As we whizzed along I spotted my first nodding donkey, which like all the others I saw today, was asleep. Nevertheless the silhouette of that distinctive solitary beam against the skyline was, for me, a memorable sight. The countryside in this part of Oklahoma is big and expansive. But it is also subtly different and has a more managed feel to it. This is very much cattle country with large ranges of grass stretching in every direction. How I longed to be able to stand about 10-20 feet off the ground and gaze into the distance. That would have really given me the chance to properly appreciate the scale of the place.

As I rode along I found myself reflecting on the last three days riding in these flatlands. What I have seen has reminded me of the constant tussle between humans and nature. Further west it seemed to me that with straightened economic circumstances, nature has the upper hand. There were more derelict and abandoned properties along the roadside and those that were still lived in seemed to be finely balanced in terms of their future. Nature is reclaiming the earth. As we rode east, the land took on a much more industrial feel with stock farming on a massive scale. Fewer dwellings, but more that look well-kept. And in between the towns, clusters of small to medium sized buildings and facilities providing the essential infrastructure for the industry. But everywhere I looked I was reminded that winning a living from the land here is not easy. Above all, I wished that I had the time and the talent to photograph and capture some of the scenes that I saw. This has surely already been done but I would have loved to record my own personal interpretations (in black and white) on this place in a way that I struggle to find with words. 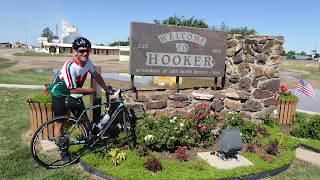 We were making such good speed that we arrived at the very recently opened (i.e. minutes before) Crossroads Cycling Pop-Up Diner in record time. This was located in Hooker, a place whose name caused much mirth and merriment within the group. Recognising a good business opportunity when they see one, the Hookers had thrown open their doors to welcome us. Now before you go getting the wrong idea readers, allow me to explain. The town is named after John (Hooker) Threikeld who it is said got his nickname from the Civil War General “Fighting Joe” Hooker. Others say he was named after an old cattleman on the nearby Beaver River. Then there are those who assert that he was a skilled cattle roper – a hooker. But whatever the origin, there is no doubt about the provenance of the town. By all accounts, Hooker was a striking person, a big man with raven black hair and eyes, resembling some say, an eagle. His features were enhanced by several gold teeth and his habit of wearing large diamond rings. Hooker died aged 92 in 1938 in Redondo Beach, which I rode through before the start of the tour. 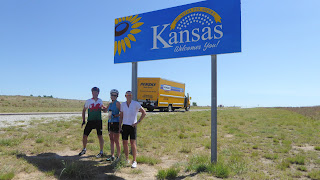 Leaving Hooker and the Hookers to their own devices we carried on east. Emil rode off into the the distance to meet his wife at the hotel. Pete and I linked up with Mary, one of the tour crew and rode together over the State Line out of Oklahoma and into Kansas. We made the obligatory stop for a photograph and then as we arrived at our destination in Liberal we were able to engage in a bit of sightseeing. The Route Sheet had noted that the Liberal Air Museum was worth visiting so that‘s exactly what we did. With over 100 aircraft spanning 90 years of aviation history on display, this is one of the country’s largest air museums. Almost every type of aircraft was on display, from small home built kit planes to relatively modern military jets. Liberal has a long association with aviation. It was a pilot training base during the Second World War and subsequently a factory for the manufacture of light aircraft.

Having satisfied our appetites for aviation we agreed that it was time to satisfy our stomachs with some lunch. After signing off the stage roster at our hotel we decided to eschew the more usual fare on offer from the chain eateries and headed back into Liberal in search of something more homely. Mary made some enquiries at a florists, as you do, and we then found ourselves at a small family-run Mexican establishment. Although from the outside it looked somewhat unprepossessing, once we crossed the threshold the three riders and their bikes were warmly welcomed, cold drinks were proffered and we were soon tucking into some tasty dishes. The CV and I had a very nice shrimp burrito. Normally I am cautious about eating shellfish so far from the sea in a month without an ‘R’ in it. Although I am sure the shrimp had been frozen it was presented in a delicious sauce and an extremely fresh and surprisingly light tortilla. Satisfaction indeed! 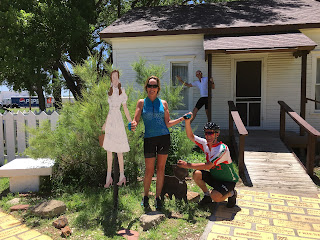 With time on our hands we went in search of Liberal’s other main attraction, the Dorothy House. Yes, Liberal is The Land of Oz. So we walked on the Yellow Brick Road, watched out for Cowardly Lion, posed with the Tin Man and flirted with other assorted characters. And a great deal of fun was had by all. Just for once it was nice to have some leisure time off the bike and mooch around. Dinner this evening was a catered barbecue organised by Itchytoo. And guess who joined us? Dorothy!

There’s a rumour going round that after leaving Liberal tomorrow there might be a bend or two in the road and even, just possibly, a junction! We’ll also be heading through country to a city that has a lot of history. I can’t wait!!

I’d like to add a little postscript to today’s report and thank everyone who’s sent me messages of support and encouragement. I really enjoy switching on my iPad after each day’s stage and viewing these. It gives me a real lift. I am sorry that I don’t have the time to respond to them all individually but I want you to know that I am really grateful for the emails, messages, thumbs up, hearts, likes, kudos and so forth. It means a lot and I hope you are enjoying my ramblings here. I would also like to thank everyone who has sponsored me for the Green Light Trust. The charity does some spectacular work helping people to better understand the natural environment and enhance and enrich their lives and lifestyles. I’ve been giving this a lot of thought over the last few days, as you might have sensed from my writings above. So, if you haven’t made a donation yet please, pretty please, think about doing so. There’s a link at the top right of this page.