After 3 days of riding on the 210-mile straight I was really hoping for a bit of variety today. A couple of bends ideally and, if I was really lucky maybe even a turn at a junction. And as it transpired I had all three and then some. Today started with a haze and finished in a blur. The humidity has been building for the last couple of days and with the temperature rising again it seemed that I was in for another day in the sweaty saddle sauna. 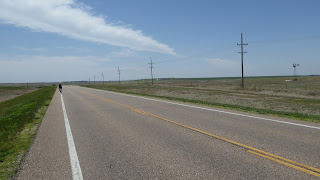 Over the last few days I’ve probably written all I can for now about the landscape we’ve been riding through. The only thing I would like to add is that during the latter part of today’s stage I almost felt I was at home in the Fens. Apart from the telegraph poles lining the roadside, the views were almost the same. A long straight two-lane road, intensively farmed fields growing arable crops including grain and maize (no beet though), irrigation gantries stretching across the fields, farm buildings and grain driers protected by small copses and, from time to time even hints of hedgerows. The big difference is that the Fenland landscape is like a scale model version of this part of Kansas. 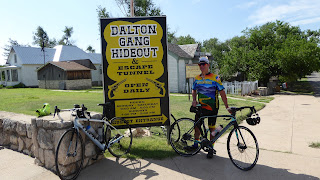 A defining feature of today was the Wildwest, cowboys and legendary lawmen, gangs, lawlessness and tough justice. Our first encounter was in the small town of Meade where the latest Crossroads Cycling Pop-up Diner had located itself. And what a location – right in the centre of the infamous Dalton Gang’s hideout. During a relatively short career from 1890-92, the three Dalton brothers and their other associates carried out a number of train robberies in the area, helping themselves to significant sums of cash and other valuables. Their end came on 5 October 1892 when, in an attempt to outdo their rival Jesse James, they tried to rob two banks on either side of the same street on the same day. They were rumbled, partly due to the delaying tactics of a clerk in one of the banks, and in the ensuing gunfight two of the brothers and two associates were killed. Another brother, Emmett Dalton survived despite receiving 23 gunshot wounds. He was sentenced to life imprisonment and pardoned after 14 years. Today Meade is a rather quieter place and the Dalton’s legacy lives on through a museum and several of the family’s properties which have been preserved for posterity. From Meade we made our way speedily and sweatily onwards with a quick pause to rehydrate in Minneola which is basically a crossroads with a gas station, a post office, some agricultural establishments and a few houses. The name incidentally derives from the names of the wives of the town’s first settlers – Minnie Davis and Ola Watson. Then in a super fast blast with a tailwind we arrived at the legendary Dodge City in seemingly no time. Founded in 1872 around the time that the railroad arrived, Dodge City has a fascinating history. As an important cattle town the drovers quickly left their mark on the town leading to it becoming known as the wildest town in the west. Famous lawmen including Wyatt Earp and Batt Masterton who in his life was also a professional gambler, journalist, army scout and an authority on prize fighting, were hired to bring law back onto the streets.

We received an excellent welcome on arrival at our hotel where bottles of ice cold water and gift bags were handed out as we checked in. Closer inspection of my gift bag revealed the perfect accessory for tonight’s dinner. Patience readers, all will be revealed – literally - in due course. After completing the usual end of ride routine i.e. washing of cycling kit and self, Pete and I went in search of refreshment, specifically some beer. We arrived at a nearby bar and placed our order. The barkeep asked us if were going to pay cash or open a tab, adding that if it was a tab she didn’t want to have to chase after us and beat the debt out of us. It seems that round here they still administer justice in the old-fashioned way! As it transpired we had a great time and were soon in conversation with several of the local worthies who were lining the bar. Yet again our British accents and our cycling activities were the ideal openers for a spot of parley with the local people. I have to say that they couldn’t have been nicer and genuinely interested in what we were doing. I could easily have spent a lot more time communing with them. Sadly, we had to leave – after paying our dues in full of course, as we had to get ready for tonight’s dinner at the intriguingly named ‘I Don’t Care Sports Bar.’

Now readers, I have a scoop for you. Included in the gift bag we received from the hotel was a red ladies garter. Dodge City still has a Can-can show and the garter is symbolic of it. I was led to believe that I was required to dress appropriately for the dinner so back in my bedroom I hitched up my trouser leg and donned said garter. It was best described as a close fit! Anyway in a moment of madness at dinner and in the absence of any dancing ladies, I took it upon myself to preform a little number for the team, stood up on a chair and gave it my all. Judging by the whoops, whistles, cat-calls and even requests for ‘more’ it seems I may have inadvertently stumbled on to a new role in life. But what’s a good ride and a hearty dinner without a little fun! I’m told that photographs will soon be available for sale on a website near you!